Don't look now, but Nate Oates has the Alabama men's basketball team playing like one of the best teams in the county.

The Crimson Tide sit at 7-1 as of the publishing of this article with wins over Michigan State and then No. 1 North Carolina. The hot start has catapulted 'Bama to No. 8 in the latest AP rankings.

Their length and athleticism has played a key part in the success thus far, and perhaps the most athletic guy on the team, 6-foot-9 freshman Brandon Miller, has emerged as a star.

Brandon Miller: As Good a Freshman as Any in College Basketball 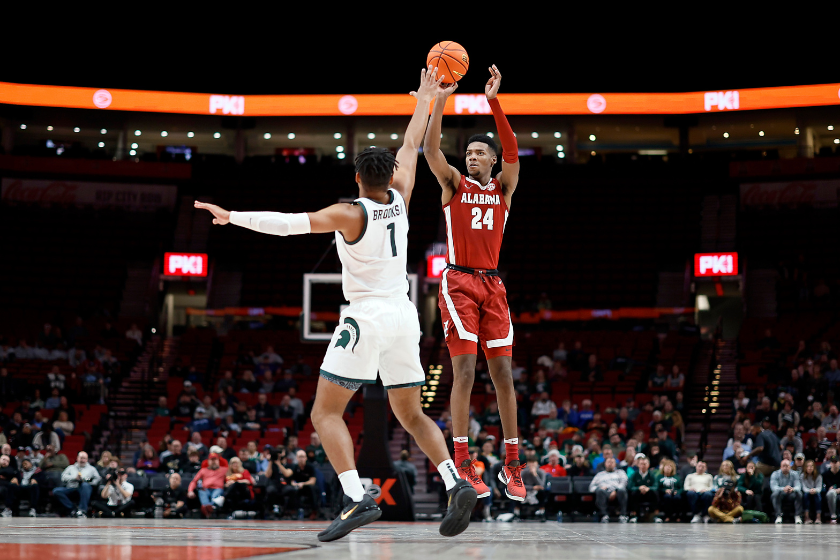 RELATED: Alabama's All-Time Starting 5 Could Beat Anyone at Any Time

Miller was the 14th ranked player in the country out of Cane Ridge High School in Antioch, Tennessee. The five-star prospect had his pick of the litter when it came to selecting a college basketball program, but he chose Alabama over Auburn, Kentucky, Tennessee, DePaul, Florida, Kansas, Louisville, Memphis, Ole Miss, Tennessee State, Vanderbilt, Wake Forest, Texas Tech.

Miller has "capital L" Length. Standing 6-foot-9 and weighing 200 pounds, he has a similar frame to New Orleans Pelicans star Brandon Ingram. And they both can really score. Miller's biggest asset is his consistency a spot up shooter. He'll find openings along the arc, and when a teammate dishes it, he's always ready to fire. He's converting on a ridiculous 46.6% of his three-pointers on 7.3 attempts per game. Someone might want to guard this guy.

Even with a slender build, Miller isn't afraid of contact. Take a look at these sequences against Michigan State.

He drives to the rim with a purpose and looks to either finish through a defender or draw a foul. Miller finished that game, an 81-70 win for the Tide, with 24 points and nine rebounds while going 4 for 7 from beyond the arc.

Miller's wide scoring arsenal has him leading the team in scoring at a clip of 19.1 points per game. And that mark makes him the leading freshman scorer in the country. He's also the team's leading rebounder with 8.9 per game.

The bad news for Alabama fans is Miller will probably only be in Tuscaloosa for one year because his hot start has him climbing NBA Draft boards. ESPN had him going seventh overall in their latest mock draft while The Ringer's Kevin O'Connor has him at No. 3 on his big board. The good news is Miller is just getting started. He'll look to lead the Tide as they navigate their way through the SEC and into March.

I expect Brandon Miller to relish it. He's built for the big moment.

MORE: Alabama Played 3-on-5 and Nearly Completed the Greatest Comeback Ever