Cade Cunningham Primed for First (And Only) NCAA Tournament 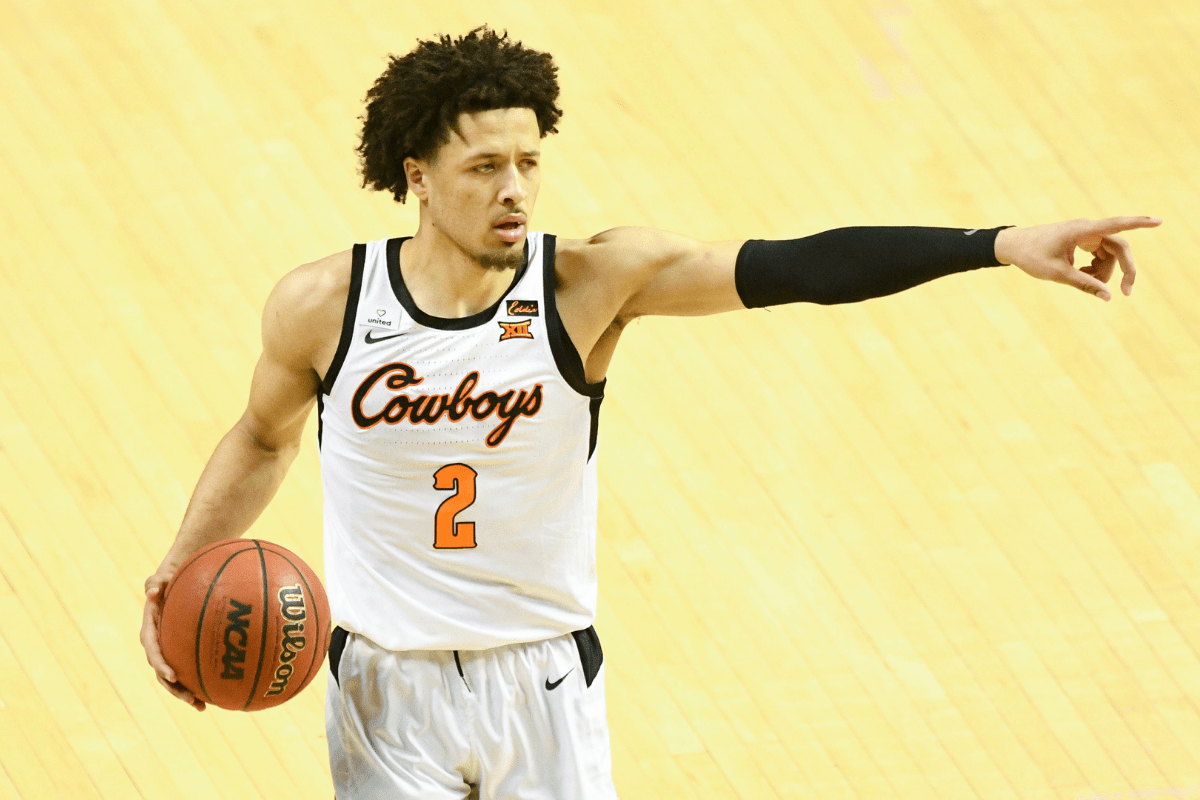 If you could build the ideal NBA player in a lab, he would look something like this: 6-foot-8ish, athletic, high-basketball IQ, can dribble and shoot.

In the Oklahoma State program, Cade Cunningham is listed at 6-foot-8 and 220 pounds. He plays point guard. He makes his teammates better, and he’s shooting over 40 percent from behind the arc.

Cunningham had big hype coming out of Montverde High School as the top recruit on 247Sports and Rivals, and the second-ranked player according to ESPN. Those expectations had some saying he could’ve gone No. 1 overall in the 2020 NBA Draft.

He’s as good as advertised and more.

RELATED: Jalen Suggs Has Taken College Basketball By Storm, And He?s Not Done Yet

Cunningham?an Arlington, Texas native?committed to the Oklahoma State Cowboys and men’s basketball coach Mike Boynton in November 2019. He chose the Cowboys over Kentucky.

It doesn’t hurt that Cade’s brother Cannen was hired as an assistant coach five months prior. Cunningham says his college basketball decision was more than the familial connection, it was being around people who made him better:

?I just wanted to be around people who were going to make me a better person, a better player,” Cunningham told Adam Zagoria of Forbes.

OSU was hit with a postseason ban by the NCAA because of a bribery scandal involving former assistant Lamont Evans in June 2020. Cunningham stayed the course and reaffirmed his commitment.

Since the appeal process is ongoing, the Cowboys are able to play in this year’s tourney.

Success followed the basketball player from Montverde to Stillwater. As a senior, he led Montverde to an undefeated season before it was called off due to the coronavirus pandemic and COVID-19 outbreak. Oklahoma State has improved in the win column since his arrival.

His ability to get a bucket when his team needs it is his biggest asset. He creates for himself and teammates like Avery Anderson and Isaac Likekele on offense. He wants the ball in his hands with the game on the line and proves he deserves it.

Although Oklahoma State lost to the Texas Longhorns in the conference tournament championship game, Cunningham had 29 points.

His outstanding play helped him rack up several accolades:

He’s also one of the 10 semifinalists for the Naismith National Player of the Year award.

Cunningham’s confidence is palpable. In March, confidence wins games. And with his, Oklahoma State can go as far as anyone.

The 2021 NCAA Tournament will be the final time we see Cunningham in black and orange. He’s the presumed No. 1 pick in the 2021 NBA Draft.

He recently gave Minnesota Timberwolves guard and 2020 No. 1 pick Anthony Edwards props in an interview with The Athletic. As a Wolves fan, I’m required to get my hopes up once a year only for them to get inevitably crushed.

The thought of Cunningham and Edwards in the backcourt together is mouth-watering. I’m as confident as ever knowing the team owns its pick this year.

Cunningham’s tangibles and intangibles are tailor made for the NBA. They work pretty well in March Madness, too.