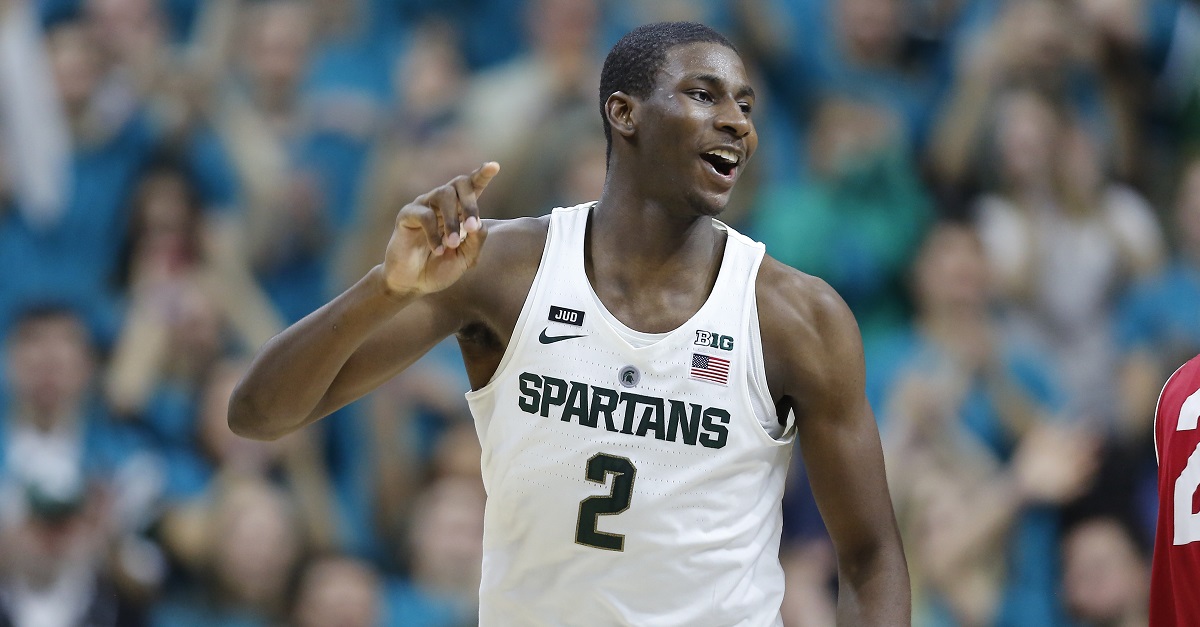 It is not yet March, but the madness of college basketball is here. Over the weekend, we witnessed Duke fall to a St. John’s team that has zero wins in the Big East, and all other sorts of other tomfoolery that would lead one to believe the sport is drunk.

The sport is, indeed, intoxicated.

Important note laced with caveats: Remember that this isn’t about something being “good” or “bad.” It is about value. Value of a team — or person, for that matter — set off expectations currently placed on that entity. This week’s edition also features  a few questions from Twitter and slight changes to the format.

Michigan State is arguably one of the two or three best teams in all of the nation. The greatness happening on the hardwood is, unfortunately for humanity, running counter to the school being at the epicenter of sexual misconduct — and far worse — over the last month.

Does Tom Izzo get credit for balancing his basketball coaching with answering questions about his handling of his own program? Nope. Not here. Had things been handled correctly in the first place, there wouldn’t be a need for him to duck questions at a press conference.

As for what is happening on the hardwood, the Spartans are currently trotting about collegiate hardwoods with an overall record of 22-3. This becomes slightly less impressive when you realize Sparty has the 269th ranked non-conference schedule. That number is slightly misleading, as MSU did face Duke early in the season, as well as a Notre Dame team that still featured Bonzie Colson. With the Irish falling off a cliff since Colson went down, so has Michigan State’s non-conference S.O.S.

Anyway, that’s all fine and dandy. Michigan State is a blue-blood program and doesn’t need an overwhelming resume to impress college basketball fanatics. This is especially because fans know of Miles Bridges — a top flight NBA Draft prospect — who returned to the fold after a stellar freshman campaign.

Oddly enough, while we can nitpick Bridges’ game this season, he’s not the question mark as March looms in the shadows, simply waiting for a Cinderella to behead one of the sport’s golden geese. Instead, people should start wondering Izzo’s rotations.

Why isn’t he allowing Jaren Jackson to prosper in full?

On the season, the 6-foot-11 freshman is only averaging 23 minutes per game, but stuffing his counting-stats, going for 11.4 points, 6.2 rebounds and 3.6 blocks per contest. He’s likely surpassed Bridges as an NBA Draft prospect and appears to be closer to mythological beast than random college basketball big.

Why isn’t Izzo playing him more? Jackson does foul at an alarming rate (3.3 per game) for how little he is on the court, yet Izzo’s decision to purposely avoid playing his most naturally talented player huge minutes is a bigger concern.

After playing 30 minutes per against Illinois and Wisconsin — averaging 16 points, 9 boards and 5 blocks in the process — he’s only averaged 19 over the last three. Strongly, it is worth noting for the sake of fairness, he fouled out against Maryland and had four more against Penn State. However, with just one personal foul attached to his name against Indiana, he played only 25 minutes.

Is there a reason — while shooting 50 percent from the floor, 33 percent from beyond the arc, and acquiring SEVEN blocks — he did not see an extra five or six minutes on the floor?

That leads us to even more questions. Is 25 minutes enough?

Shooty hoops only has 40 minutes per contest. How much time is the appropriate amount for a player of Jackson’s caliber to spend on the court? Given that only Bridges plays more than 30 minutes per game for Izzo’s squad, and the two only other guys who get more minutes than JJJ for Sparty are guards, it is easy to dismiss this call for MSU to let Jackson play even more.

And yet, if Michigan State wants to reach the potential it has by way of the insane talent on the roster, Izzo needs to figure out rotations that let Jackson cook. If that is Bridges playing more of the three, despite clearly being less consistent at the position when doing so, or designing schemes that maximize floor spacing, there has be something that can be done.

Rare are teams lucky enough to have two NBA Draft lottery level players. The Spartans have just that in Bridges and Jackson. It’s time for Izzo, even with all the success he’s had this season operating as is, to start tinkering with the lineups. That way, come the Big Dance, he can ride those two guys to the promised land.

The “if it ain’t broke, don’t fix it” line is great for us when trying to convince significant others to not dump us over our countless hours playing Mass Effect 2. For a college basketball coach, s/he should be trying to maximize the roster’s potential at all times, even if it comes at a cost of a few games in the regular season, so that program knows what will work best when it matters most.

*obnoxious guy at a presser* TALK ABOUT MIKE DAUM

Mike Daum should be a familiar name to mid-major maniacs. Daum, of castle South Dakota State, scored 25.1 points per game for a Jackrabbits team that went to the NCAA Tournament last season. Heading into the 2017-18 voyage, people were speculating that he’d not only fight for some All-American awards, but a spot in the NBA.

Somehow, through the magic of people not actually caring about lower mid-major hoops nearly as much as they claim, Daum’s season has gone unnoticed. That’s despite him currently averaging 23.5 points per game on 47 percent shooting from the floor and converting 41 percent of his attempts from beyond the arc.

Of note: Mike Daum, King of the South (Dakota State), is only a junior. Also, I’m trying real hard to make him a Game of Thrones character.

Unfortunately for the Rabbits, they only have one win against a team in the RPI top-50 (Buffalo), and only one more within the top-100 (a flailing Ole Miss team). Daum was great in both, averaging 30 points.

Not at all shockingly, in losses against the proven competition of Wichita State and Kansas, Daum was good in both, though the Jayhawks took the Rabbits to the woodshed back in November.

Simply put: While South Dakota State has a good overall roster relative to the Summit League, it will need Daum to be an eater-of-worlds for the program to make noise in March. As importantly, it will still need to win the conference to earn a pair of those elusive dancing slippers.

Hopefully, for those who love volume-shooting superheroes, Daum is able to put on some performances in the Big Dance. To play it safe, I suggest people try to consume at least one or two South Dakota State games when the Summit League tourney hits.

Who's the best player in the nation nobody's talking about?

This is a loaded question. No matter who I answer, a flock of people will politely ask, “what about Player-X?”

For whatever it is worth, Player-X is also awesome. Player-X is all that and a bag of chips, even. Player-X, on Team-Y, is shockingly great and can carry his ho-hum roster to the Final Four!

Let’s make this simple. It’s the best player on one of the country’s most underrated teams. We’re talking about Keita Bates-Diop, a junior on the Ohio State Buckeyes.

Did you know Ohio State is currently in second place in the Big Ten, actually ahead of the aforementioned Spartans and only behind the overachieving Purdue Boilermakers? Does this mean the Big Ten is… a good conference?

I don’t know. I also don’t care to argue about those semantics at the moment.

Bates-Diop, who didn’t even average in the double-digits last season, has emerged as a bucket-making marvel, putting up 20.2 points per to go along with his 8.9 rebounds.

Having evolved into a competent shooter from distance (37 percent from three), Bates-Diop has been a more diverse weapon this season. I don’t necessarily know what the pulse is on him from a national perspective, but he’s a budding superstar — if not by now, come the Big Ten Conference Tournament.