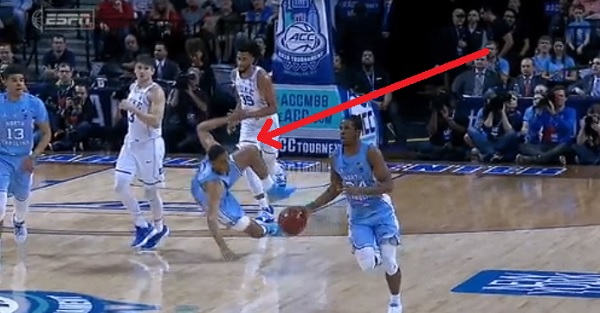 Tripping players isn’t exactly new ground for Duke guard Grayson Allen, but it looks like he has at least found new form for doing it.

In a game against North Carolina in the ACC Tournament, Allen received a flagrant-1 foul for tripping Garrison Brooks as he attempted to run up the floor

Grayson Allen is at it again pic.twitter.com/WBxuBbycKb

We have to say, the flying butt/hip check maneuver is a new one for Allen. His previous exploits have generally been targeting the legs of opposing players, but this time it looks like he put a little more weight into it.

As for Brooks, he appeared to be okay after taking the hard foul to the ground. He made both of the free throws from the flagrant foul.