The NCAA couldn't have asked for a better Final Four. On one side, Villanova, the King "New Blood", takes on Kansas, the well-established blue blood. On the other is a little matchup between college basketball's biggest rivals:

It was the matchup we all wanted, and the matchup none of us predicted. Call it general Duke annoyance, call it them struggling late in the regular season and in the ACC Tournament, for some reason, the Blue Devils were forgotten when people were filling out their brackets. Almost none of my competitors in my bracket pools had Duke in their Final Four. Gonzaga's collapse against Arkansas in the Sweet 16 certainly helped, but Mike Krzyzewski has Duke playing their best basketball at the perfect time.

As for North Carolina, Hubert Davis blew expectations out of the water and led the Tar Heels to upsets over Baylor and UCLA. Then, they played the part of evil stepmother and thrashed Cinderella, aka Saint Peter's, to book their ticket to New Orleans.

The two split their regular-season meetings. So, what can we expect in the rubber match between the hated rivals?

Duke vs. North Carolina: A Final Four Matchup Made in Heaven 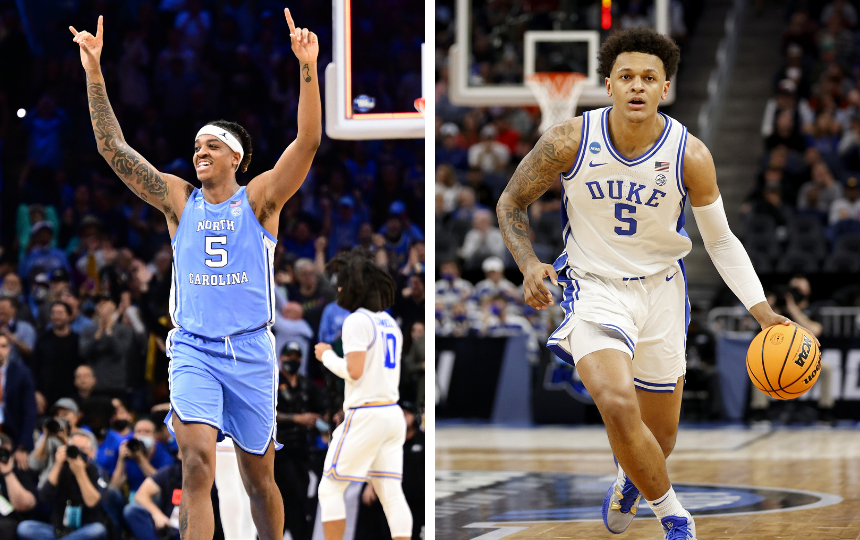 RELATED: Coach K: Inspiring A Generation of Basketball Fans Across the Country

Duke and North Carolina have met more than 255 times, yet, this will be their first time playing in the NCAA Tournament. This will also be the last time Coach K faces his archrival Tar Heels, as, stop me if you've heard, this is his final season leading the Duke Blue Devils basketball program.

History, schmistory, we need to look at this season's two matchups to get a general feel of how Saturday in the Big Easy is going to go. In the first go-around in Chapel Hill, Duke handily took care of the Tar Heels in an 87-67 win. Then, UNC got their revenge by spoiling Coach K's last game at Cameron Indoor Stadium with a 94-81 victory. It was every North Carolina fan's dream come true.

But, Duke now has a chance to get revenge on North Carolina's revenge. The Blue Devils enter the matchup knowing their horses are on their game. Paolo Banchero headlines the talented bunch -- having won the West Regional's Most Outstanding Player -- and AJ Griffin has been shooting well, Mark Williams defends and rebounds like a maniac and Wendell Moore is as reliable as anyone. Plus, Jeremy Roach has been a beast since replacing Trevor Keels in the starting lineup at the beginning of the NCAA Tournament.

UNC blew up thousands of brackets when they upset Baylor in the round of 32. Then, Caleb Love's 27 points in the second half spearheaded a comeback against UCLA in the Sweet 16. Love, Armando Bacot and Brady Manek put on a show in the East Regional. However, the Tar Heels are susceptible to giving up big runs, as displayed when they almost squandered a 25-point lead against Baylor, but they can never be counted out.

All that being said, I don't see Duke losing this game. They're clicking on all cylinders, they're playing harder than ever for Coach K and they won't be caught dead losing to UNC again. To counter, North Carolina has nothing to lose similar to when they beat Duke in Cameron to close the regular season. There's no way Duke let's that happen twice, though. They simply cannot let that happen.

Duke is favored by four as of the publishing of this article. I have a foolproof method when betting: go with my gut or go against my gut because most of the time my gut sucks and I have no idea what I'm doing. I'm going with my gut on this one.

MORE: Hubert Davis' Wife Leslie Has Been His Rock Through Tragedy and Triumph