Well, in Durham, North Carolina, Duke University introduced their new coach. A relatively small figure in the college basketball world, this individual would become the greatest basketball coach of all time. Of course, I'm talking about Michael William Krzyzewski, or as many of you know him, Coach K.

I'm sure I just lost a bunch of readers after that first paragraph. At least the ones that scoffed at the headline but proceeded to hate click anyway. And that's ok. The thing is, I've been a Duke basketball fan my entire life. Ever since I was a little kid, I remember watching the Blue Devils on TV. I think early on, I thought the name and logo were cool. But as I started playing basketball myself, I realized just how incredible a program Coach K had built.

Which made March 5, 2022, an emotional day, as Coach Mike Krzyzewski entered Cameron Indoor Stadium for the last time in a game against the North Carolina Tar Heels. Nearly 42 years after he was named the head coach of Duke, Coach K led the Blue Devils for the final time of his illustrious coaching career in front of the Cameron Crazies. It also marked one of the last times I would see the only coach I've ever seen at Duke. A coach I looked up to immensely, a coach I dreamed of playing for one day, and a coach who made a great impact on my childhood.

And now he's coaching in his final NCAA Tournament, looking for his elusive sixth National Title.

A Rocky Start for Coach K at Duke 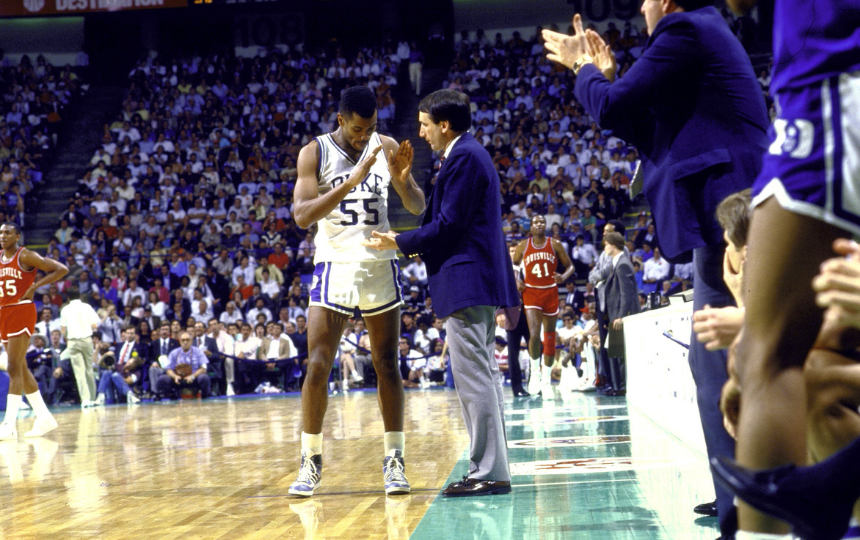 Fresh off a five-year stint coaching at West Point, leading the Army men's team, his first three years at Duke were relatively abysmal, the team was sub .500, only making it to the postseason once, a NIT berth. Two of those years, Duke would finish near the bottom of the ACC.

I'm sure at that time, the higher-ups at Duke were questioning whether the Bobby Knight protégé was the answer. Just two years before naming Mike Krzyzewski coach, the Blue Devils had made the National Championship game, losing to Kentucky. But fortunately for all of Duke Nation, they stuck with Coach K, and what would follow would become a powerhouse for four decades.

Coach K's last losing season was his third year as coach. From then on, Duke would dominate the college basketball world. In his fourth year as coach, Duke would finish 24-10 and was ranked No. 14 in the nation. They made it to the Round of 32 in the NCAA tournament. This March Madness birth would be the first of 37 NCAA tournament appearances. In fact, Coach K's Duke Blue Devils only missed three tournaments during his tenure.

From 1996 to 2019, they made 24 consecutive NCAA tournaments, the second-longest streak in college basketball history. Before that streak started, Duke made 11 straight tournaments, five of which they made it to the National Championship game.

Becoming Duke As We Know Them Today 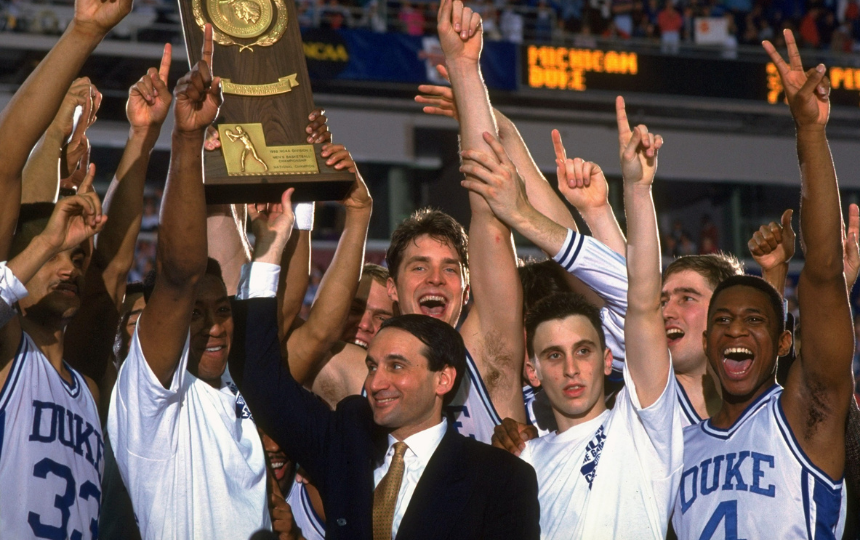 Despite the success Coach K seemed to be finding with the Blue Devils, it appeared they couldn't make it to the promised land.

Before the end of the 1990 season, Duke would reach the National Championship game twice, losing to Louisville in 1986 and getting embarrassed by UNLV in 1990. In between those games, Duke made the Final Four four out of the five years. It was starting to look like Coach K was only ever going to be a bridesmaid and never the bride.

The very next year after Duke got trounced in the National Championship game by UNLV, they got their attempt at revenge in the 1991 Final Four. Playing against each other in a semifinal game, UNLV was heavily favored to repeat what they did to Duke the year before. However, thanks to two late Christian Laettner free throws, Duke would upset UNLV and eventually beat Kansas to secure Coach K's first National Championship trophy.

That upset of UNLV seemed to fuel Duke for the next season as well. Duke finished the 1991-92 season with only two losses. They entered the 1992 NCAA tournament as the No. 1 team in the nation and breezed their way to an Elite Eight date with a Rick Pitino-led Kentucky Wildcats.

Now I have a feeling that a majority of the readers know what happened in that game and I don't want to rub it in. It appears a lot of Kentucky fans still feel visceral pain whenever anyone brings up Christian Laettner's soul-crushing buzzer-beater. (Oops, sorry to bring it up again.) Duke would then beat the Fab Five, also known as the Michigan Wolverines, to win back-to-back National Championships.

All He Does Is Win, Even Beyond Durham 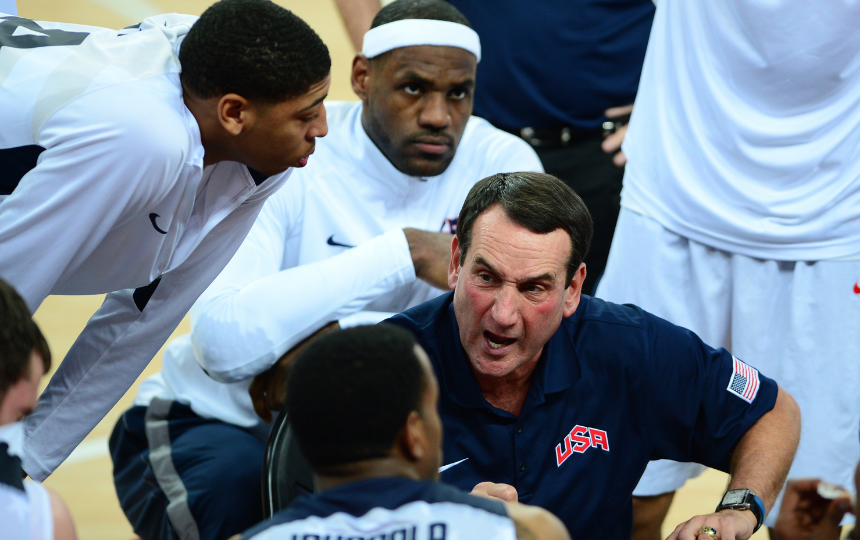 Coach K would continue to find great success with his Blue Devils for the next 30 years after the 1992 Championship game. He would win three more National Championships: 2001, 2010 and 2015. His five championships are only second to UCLA's John Wooden.

He would become the winningest coach of all time. First passing his mentor, Bobby Knight, on November 15, 2011, when he beat Michigan St. in Madison Square Garden for his 903rd win. Then, a little more than three years later, he would become the first Division I men's basketball coach to reach 1,000 wins, when he did it in the same building against St. John's. At the time of this article, Krzyzewski's coaching record is just shy of 1,200 wins. I think it's safe to say no Duke coach, or any other Division I men's basketball coach, will ever reach those numbers.

Coach K also found success globally. He was an assistant on the 1992 US Olympic Gold Medalist "Dream Team." In 2005, he was appointed head coach of the USA men's national basketball team. From there, the Basketball Hall of Fame inductee would win three straight Olympic gold medals, first of which was with the 2008 "Redeem Team." During his tenure as USA men's national basketball team head coach, Coach K went 75-1 in international play, winning two FIBA World Championships as well.

Coach K Does More Than Coach 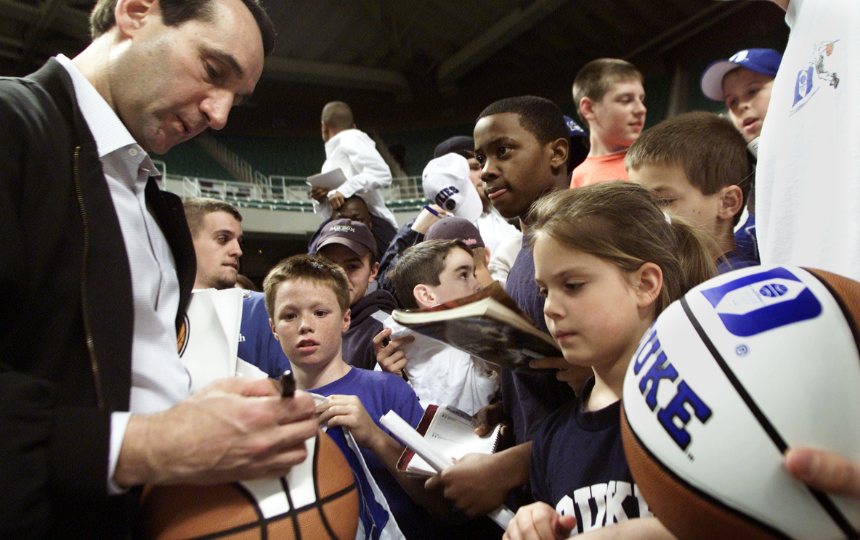 I could keep going, I really could. But I have a word limit and there's just so much to say about Coach K's career, I haven't even scratched the surface. So, I'll just finish up with how I feel about him. Which has its own difficulty because how do I possibly sum up an entire lifetime of looking up to someone.

All I've known about Duke has him at the helm. In a way, a younger version of me saw him as immortal. But as the final whistle was blown in Durham, North Carolina on March 5, 2022, as Duke fell to UNC, I learned that even Coach K is human and succumbs to time.

But when I was a kid, learning the game, Coach K was a hero. I would spend countless hours in my driveway, pretending I was playing for him. I would beg for Duke tickets every year for Christmas, just so I could see him in person. Luckily, I was able to do that a few times, not bad for this New England Kid. I suppose I knew the day where he would coach his last day at Duke would come, but I never wanted to accept it.