American basketball fans have been hearing about Evan Mobley for a long time. They've heard he's like the best players in the world, Kareem Abdul-Jabar, Kevin Garnett, Kevin Durant and Giannis Antetokounmpo, but all stuffed into one big man.

Evan Mobley has been a revelation in the NBA, but that was to be expected considering his family tree. His older brother will eventually join the Association as well, just like their father before them did. Evan Mobley's dad was never an NBA star, but that doesn't mean he's not a basketball pro.

Evan Mobley's mother, Nicol Mobley, is a kindhearted elementary school teacher. When she attended San Diego's Mount Carmel High School, she was far from kind during basketball games. She led her high school basketball team to a state championship. She later married a college basketball player.

Eric Mobley, like his wife, has long loved the game of basketball. He played collegiately at Portland and Cal Poly Pomona. Professionally, he played in international leagues, taking him from Portugal to Indonesia. He is not the same Eric Mobley selected in the first round of the 1994 NBA Draft by the Milwaukee Bucks, who died this year.

When Eric's professional basketball career ended, he switched to coaching. He eventually found success with his local AAU team, the Compton Magic. His AAU experience helped him land a job as a University of Southern California assistant coach in 2018. 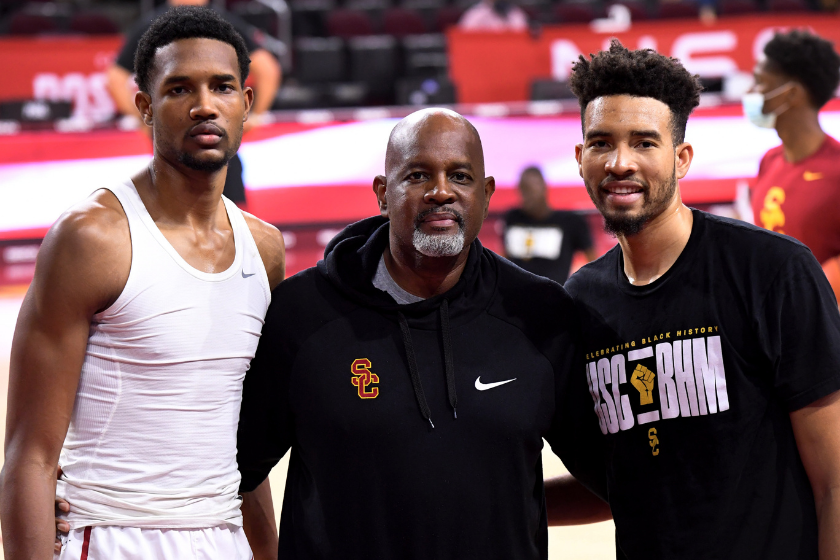 Like his brother Isaiah, Evan Mobley was born in San Diego, California, but raised in Murietta, California, north of Temecula. Both brothers played AAU ball and starred on the court at Rancho Christian School, where they dominated the high school hoops scene.

Evan won Gatorade California Player of the Year two years in a row, the only player to do so since Jrue Holiday, who just won the NBA Finals with the Milwaukee Bucks. The seven-foot center soared like an Atlanta Hawk over his high school basketball rivals, regularly slamming dunks on his shorter opponents. Evan chose to play college basketball at USC over Washington and the crosstown rival University of California, Los Angeles. Both teams went deep in the following NCAA tournament playoffs.

A five-star men's basketball recruit (just like his brother), Mobley was the highest-rated recruit in USC basketball history. He played his one-and-done season in Pasadena during the coronavirus pandemic, preventing fans from seeing the Mobley Show live and in person. That's too bad, because Mobley had an incredible season.

The consensus All-American, alongside head coach Andy Enfield, led the Trojans deep into NCAA March Madness. After defeating Kansas and Oregon, the USC Trojans fell to the Gonzaga Bulldogs, the eventual runner-up.

Evan Mobley NBA Draft and Beyond

The Mobley brothers declared for the 2021 NBA Draft, though Isaiah later decided to remain at USC for one more season. CBSSports projected Evan to go to the Houston Rockets at number two, behind Cade Cunningham but ahead of G-Leaguer Jalen Green. ESPN had Evan going at number three, behind the Cunningham and Green, and Isaiah at 86, deep into the fourth round.

The Cleveland Cavaliers agreed with ESPN and selected Evan with the third-overall pick in the 2021 draft. And the rest, as they say, is history. So far in his freshman season in the Association, the USC product has delivered for the Cavs by besting the rest of the NBA Rookie Class in blocks and rebounds.

As the Cavaliers look to climb back into the playoffs for the first time since LeBron James left town for Los Angeles, Evan Mobley seems like the perfect candidate to build around. I mean, he's only been in Cleveland for one season and the team has already turned things around.

You've been hearing the name Evan Mobley for a while and you're going to remember it long after he's left the hardwood.

MORE: Reggie Miller's Sister Was Better Than He Ever Was