"Hoosiers" is one of the greatest sports movies of all time. It has everything you could possibly want. Watching it now is just as good as the first time you saw it.

Written by Angelo Pizzo and directed by David Anspaugh, the 1986 sports film is loosely based on a true story about the 1954 Milan High School basketball team, which also won the Indiana state championship game that year.

The Hickory Huskers embody the small-town life, embrace the underdog role and win the state title game at Butler's Hinkle Fieldhouse in Indianapolis. It rightfully earned a pair of Oscar nominations, including for the score by composer Jerry Goldsmith, because it's that good.

Although the real life story is certainly different than the movie, it was a box office success with a memorable cast. But where are the stars of "Hoosiers" today?

Gene Hackman had several amazing roles during his acting career, and "Hoosiers" is easily one of his best. He retired in 2004, and today, the 91-year-old is living a quiet life with his wife Betsy in Santa Fe, New Mexico. 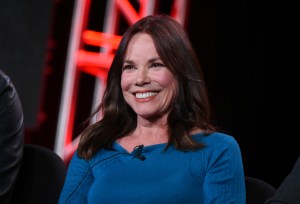 Barbara Hershey was great in "Hoosiers," but it was actually one of her lesser-known roles. She won an Emmy and a Golden Globe for "A Killing in a Small Town" in 1990 and is still acting today. Hershey is 73 years old and recently had a role in the "Paradise Lost" TV show.

Dennis Hopper's performance in "Hoosiers" as the basketball savant and town drunk was nothing short of incredible. He was so good that he received an Oscar nomination for his role as assistant coach. Sadly, Hopper died in 2010 from complications of prostate cancer. He was 74.

RELATED: Then and Now: The Cast of 'Caddyshack' 40 Years Later

Maris Valainis will always be Jimmy Chitwood. How could he not be? Jimmy was clutch and his sweet jump shot helped Hickory go to the Indiana state finals and win the championship. Today, Valainis runs a consulting business for commercial construction and spends his days in Indiana and California.

When it came to acting, "Hoosiers" was it for Brad Boyle. However, he had a different calling in life. Boyle was a member of the Indiana National Guard and later became a physician's assistant. Boyle has been married since 1997 and has three children, according to IMDB.

After his brief acting career, Steve Hollar became a dentist. He owns his own practice today in Warsaw, Indiana. He is married with three children.

Buddy Walker was the Hickory team captain, and Brad Long used those same leadership skills in real life. He became a motivational speaker and a salesman at Jostens. The 59-year-old Long is married with two children.

Perhaps the most-accomplished actor on the Hickory Huskers team, David Neidorf was also featured in hit movies such as "Platoon" and "Bull Durham." He returned to Knightstown -- where the film was made -- back in 2016. He played professional poker after acting before working in property management.

Kent Poole got the role as Merle Webb at an open audition. He had some famous parts in the movie, including the line, "Let's win this game for all the small schools that never had a chance to get here."

Tragically, Poole took his own life in 2003. He had a wife and three young children.

That line never gets old. Strap was the most religious member of the Hickory basketball team. As of a few years ago, Scott Summers is married and works as a contractor. Other details of his personal life are hard to find.

Last but not least, there is Ollie. Wade Schenck, much like most of his teammates, never acted before shooting free throws in "Hoosiers" and it was his only role ever. He was divorced, as of 2011, and has two children. His LinkedIn profile indicates he is an account manager for a welding company based in the Louisville, Kentucky area.

There were also some great supporting roles, such as Chelcie Ross as George Walker, Robert Swan as Rollin, Sheb Wooley as Cletus Summers and Fern Persons as Opal Fleener. Writer Angelo Pizzo and director David Anspaugh made a classic in "Hoosiers" and did it again with "Rudy."

For many of these actors, their lives changed with Hoosiers and it's amazing to see what many of the Hickory Huskers are up to today.

MORE: Where is the 'Remember The Titans' Cast Today?