College basketball insider Jon Rothstein describes the Villanova Wildcats as a Fortune 500 company. The CEO, head coach Jay Wright, certainly looks the part. The slicked-back hair, the debonair suits, Wright could walk into a board room, start running a budget meeting and no one would bat an eye.

However, he prefers the sideline.

Wright, a Newton, Pennsylvania native who attended Council Rock High School North, started his coaching career as an assistant coach at Rochester, Drexel, Villanova and UNLV before he was made a head coach for the first time at Hofstra University in 1994. He built the Pride into one of the best programs in the American East, winning the conference's regular-season title and postseason tournament in his final two years. Villanova took notice of his success and hired him to be their men's basketball coach in 2001.

Behind the Villanova head coach's success is his wife Patricia Wright, who has stood by his side for nearly 40 years. 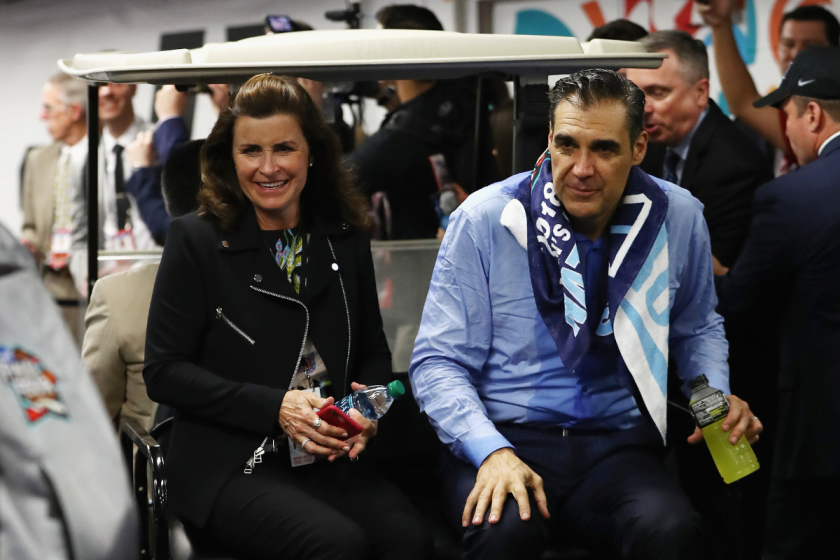 RELATED: Meet Cindy Self: The First Lady of Kansas Basketball

Jay and Patty Wright met in Philly in 1983. She was a cheerleader at Villanova University. He was a college basketball player a Bucknell University and worked part-time in the marketing department for the USFL's Philadelphia Stars.

While Jay was early on in his coaching career, Patty earned her law degree. Although, she spent most of her post-law school life concentrating on the couple's children: sons Taylor and Collin and daughter Reilly.

Taylor Wright played college baseball at Brown University. He's currently a pitcher for the Evansville Otters of the Independent Frontier League. Collin attended Fordham and worked for Vanguard for four years after graduation, per his LinkedIn. He's in the process of getting his MBA from Penn's Wharton School and works as a strategy intern for DICK's Sporting Goods. Reilly, the youngest of the Wright bunch, attended Penn for undergrad and is in law school at Georgetown.

The life of a college basketball coach can be demanding, but Jay and Patty have found a way to balance it with their family. For example, Jay helped coach his sons' Little League team when they were younger and frequently attended Reilly's softball and basketball games.

Patty has been outwardly supportive of Jay's career and, of course, has been thrilled about the success her Hall of Fame husband has brought her alma mater. Whether he wins a third national championship in seven years or loses, she will always be his number one fan.