Syracuse men's basketball head coach Jim Boeheim is a rarity in hoops and sports as a whole. Few NCAA coaches can say they've only ever known one program and never left.

That's exactly what the borderline relic Boeheim has done. The Lyons, New York native played his ball at Syracuse as a walk-on back in the 1960s. As a senior captain, he led the Orange to just their second-ever NCAA Tournament.

Stints as a graduate assistant and assistant coach led him to the head coaching position in 1976. In the 46 years since, he's guided the Orange to a national championship, five Final Four berths, five Big East Tournament championships and more than 1,000 wins (if you count the 101 vacated by the NCAA in 2015).

The 77-year-old is now coaching his sons Buddy Boeheim and Jimmy Boeheim on the tail-end of what has become a full-circle career. Buddy's rise has made many fans ask who the First Lady of Syracuse athletics is. 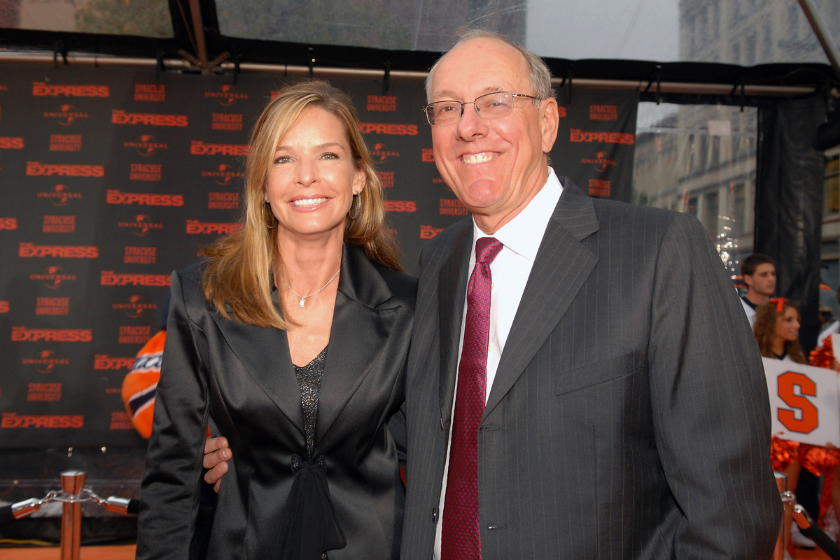 Jim Boeheim is married to Juli Greene Boeheim, who at 55 is more than 20 years younger than her husband. She was born in Miami, Florida, but was raised in Kentucky.

The two didn't meet on the court like one would expect. It was the horse racing track where they first crossed paths.

According to a Sports Illustrated article, the two met at a Kentucky Derby party in Lexington in 1994. But what caught Juli's attention considering the over 20-year age difference?

"I saw someone who is bright and funny and well-read and mature and realistic. But I see someone who can be playful, too," she said.

Juli officially became the wife of Jim Boeheim when they wedded in October 1997. The College Basketball Hall of Fame member would win a national championship several years later in '03 with future NBA superstar Carmelo Anthony.

Besides being a basketball mother and wife, Juli also helps run the Jim and Juli Boeheim Foundation, which "strives to enrich the lives of kids in need within our Central New York community, as well, as, provide support for eliminating cancer through research and advocacy," according to the foundation's website.

Juli graduated from the University of Kentucky and, after moving to Syracuse to be with Jim, earned a Master's degree in child and family studies from the school her hubby coaches at.

Juli Was Robbed at Gunpoint By a 12-Year-Old 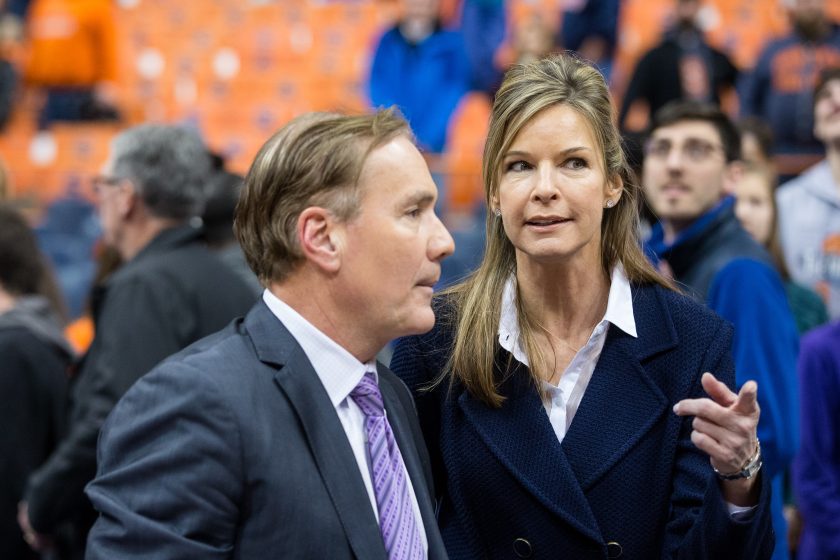 Juli went through a pretty distressing situation on March 1, 2022.

She was sitting in her car in a Syracuse Cheesecake Factory parking lot when a 12-year-old boy allegedly confronted her with an airsoft gun, stealing her purse and phone. The boy, who is now being held at Hillbrook Detention Center on charges of second-degree robbery, then hopped into a stolen car with three other men after robbing her, according to reports. Juli wasn't harmed.

Jim Boeheim talked about the incident on a Syracuse radio station.

"She's definitely shook up. I mean this isn't television; it's not movies; it's real life. Somebody puts a gun in a face," Jim Boeheim told ESPN Syracuse. "She's handling it well, I mean better than I probably would."

Jim Boeheim was previously married to Elaine Boeheim from 1976-94.

According to The Daily Orange, their relationship began to take a turn for the worse around the same time his program was under NCAA investigation for recruiting violations in the early 1990s. The NCAA placed the program on a two-year probation and banned it from the 1993 NCAA Tournament.

"As all that was happening, Boeheim was experiencing difficulty with his first wife, Elaine, with whom he had his first child, Elizabeth, now a junior at Colby College in Maine," The Daily Orange wrote 16 years ago. "Jim and Elaine eventually divorced in 1993. Boeheim's longtime best friend, Tony Santelli, said the general public knew Boeheim's every move was especially hard for a reclusive man from a small town."

A divorce. Banned from the NCAA Tournament. Meeting Juli the following year must have been one of the greatest things to happen to Jim's personal life.

Jim has three children with Juli Boehiem, all of which play college basketball.

Buddy Boeheim, whose real name is Jackson, is the 6-foot-6 star of the Syracuse men's basketball team social media fell in love with. The team's leading scorer posted 30 points against San Diego State in the first round and 25 against West Virginia in the second round of last year's NCAA Tournament to send the Orange to the Sweet 16. He came to the 'Cuse a three-star recruit out of high school.

Older son Jimmy Boeheim played his hoops at Cornell University. He averaged 16.7 points per game as a forward during the 2019-20 season but joined his father and brother at Syracuse as a graduate transfer in 2021.

When Cornell and Syracuse played each other in 2018, Juli wore a shirt that read, "Battle of the Boeheims." The Orange won. Jimmy scored nine points. Buddy hit one three-pointer.

Their third child is daughter Jamie Boeheim, whom Juli calls "Sissy." She played for the University of Rochester, where she played forward for one season and served as the team manager in 2019-20.

Jim also has a daughter named Elizabeth Boeheim whom he adopted with his ex-wife Elaine. According to The Daily Orange, the 36-year-old Elizabeth lives in Montana and previously studied at Colby College in Maine and the University of Montana.

Even though she doesn't see her father often, she says they've always had a strong bond.

"Of course he's an incredible coach who has built a really successful career that stands out among other greats," Elizabeth told The Daily Orange. "He's a thoughtful person. He's smart. He pays attention to the world and he's a really good father. He cares more about his kids than anything else. I'm glad he's my dad."

The ACC college basketball coach has been a staple in Syracuse University's Carrier Dome since it opened in 1980 and his net worth is evidence of his success.