The shorts were three three sizes too big. The jersey added 15 pounds to his frame.

Superstar forward Kevin Durant was a beanpole in his Texas Longhorns uniform.

Draped in burnt orange, Durant stepped into Allen Fieldhouse on the last day of the regular season and cemented himself as the best player in college basketball.

The freshman phenom torched the third-ranked Kansas Jayhawks for 32 points on 7 of 14 shooting, including sniping 6 of 8 three pointers. Although the Longhorns fell 90-86, KU fans breathed a sigh of relief.

They would only have to worry about him once. 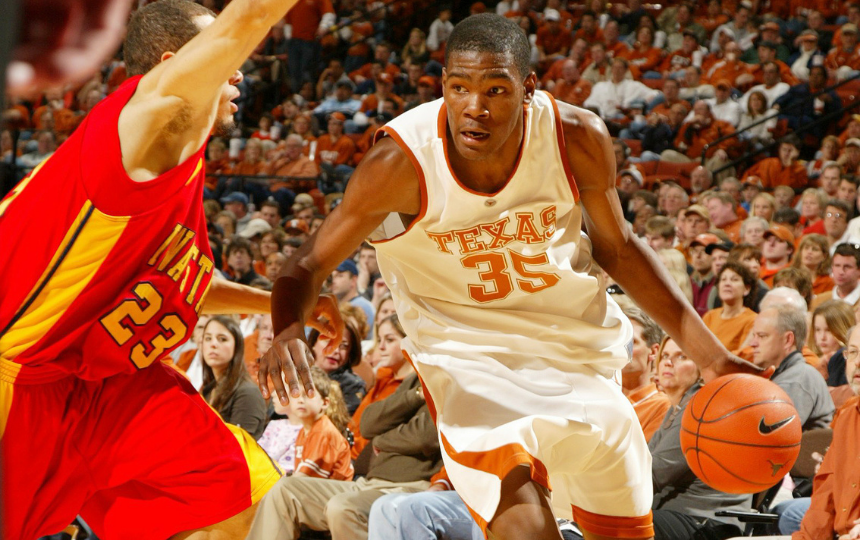 RELATED: Kevin Durant Was Engaged Once, But is Still Looking for True Love

Durant grew up in Prince George's County, Maryland and was active in the Washington D.C. hoops scene from an early age. He played with several future NBA players, including Michael Beasley, Greivis Vasquez, and Ty Lawson on the AAU circuit.

Before his senior year, Durant committed to play for head coach Rick Barnes at the University of Texas. He chose UT over UNC, UConn, Georgia Tech, Kentucky, and Louisville. The small forward was considered the second-best recruit in the country behind Greg Oden. He won the MVP at the 2006 McDonald's All-American game.

Durant sprouted to 6-foot-9 by the time he arrived in Austin and immediately became a favorite of ESPN and CBS broadcasts. He could score at will through a lethal jumper, soft touch, dunks and a high motor. He averaged 25.8 points, 11.1 rebounds, 1.3 assists, 1.9 steals and shot 81.6 percent from the free-throw line, while leading the Longhorns to a 25-10 (12-4 in Big 12) record.

Going into the Big Dance, Texas had big expectations. In addition to Durant the roster was filled with future NBA talent such as D.J. Augustin, Damion James, and Dexter Pittman. The Longhorns entered the NCAA Tournament as the four-seed in the East and beat New Mexico State 79-67 in the first round. Durant recorded 27 points and 8 rebounds.

A matchup with the fifth-seeded USC Trojans waited in the Round of 32. In a disappointing effort, USC defeated Texas 87-68. Each Trojan starter scored in double figures while Durant had 30 points and 9 rebounds. He finished the season fourth in Division I men's basketball scoring.

He also became the first freshman in history to win the Naismith Award.

Durant declared for the 2006 NBA Draft following the season. He was selected second overall by the Seattle SuperSonics.

Big 12 foes like Oklahoma, Baylor and Kansas State were more than happy to see him go. 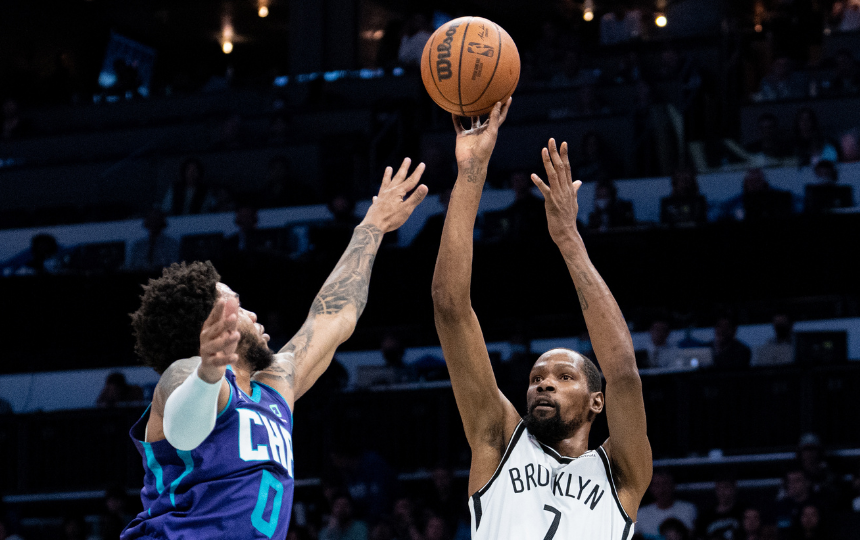 Durant didn't take his foot off the gas. His talent translated seamlessly to the professional game, where he's ascended to one of the all-time greats.

Suiting up for the Oklahoma City Thunder, Golden State Warriors, and Brooklyn Nets, Durant has played alongside some of the NBA's best, including Russell Westbrook, Steph Curry, Klay Thompson, Kyrie Irving and James Harden.

Durant is one of the most purely talented players in the sport. It's always a treat to see him compete with the likes LeBron James and Kawhi Leonard.

MORE: Greg Oden Didn't Play Long, But He Walked Away With a Fortune