5 March Madness Legends from the ‘90s We All Forgot About 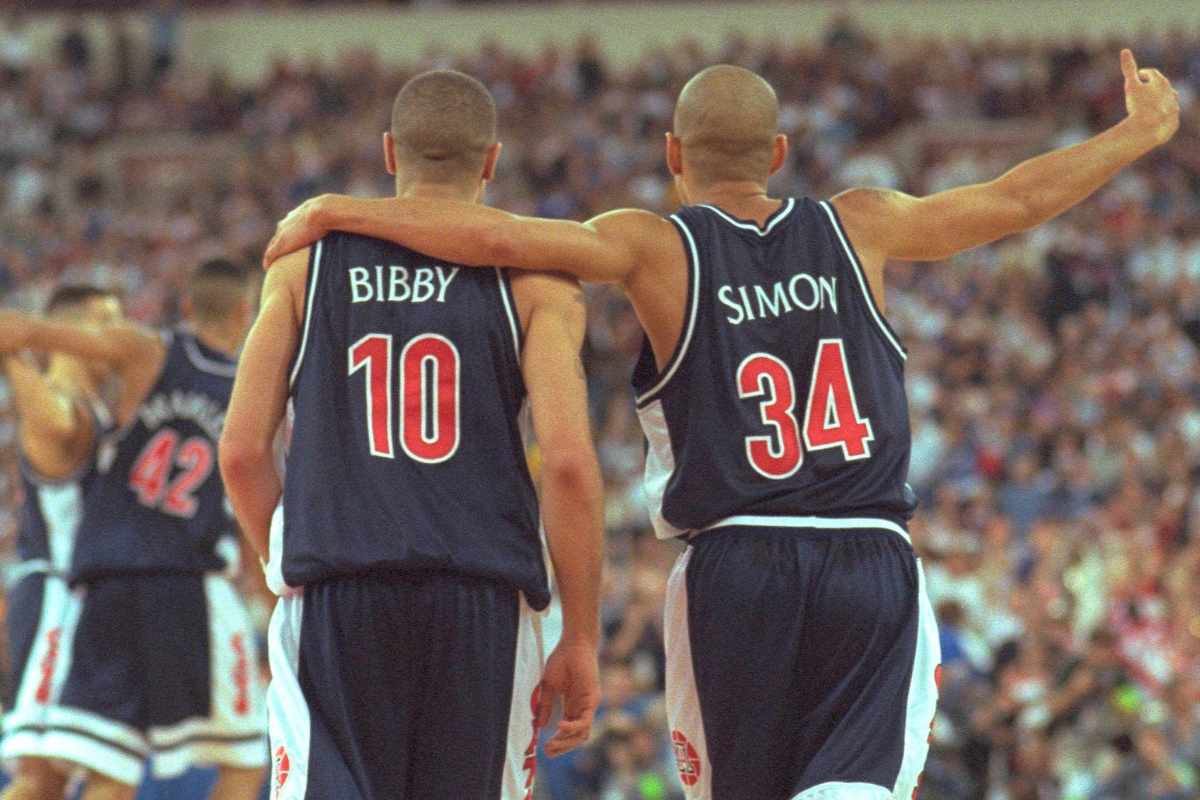 The 2022 NCAA Tournament will have a new group of players becoming March Madness stars. These players will either have magical moments or extended success leading their teams to a deep run. Some will even make it to the coveted Division I College Basketball National Championship, where legends are made.

Let’s revisit a group of players who made NCAA Men’s Basketball Tournament history in the 1990s but then didn’t go on to have similar success in the NBA. Players who need a little help being remembered.

5 March Madness Legends from the 1990s You May Have Forgotten

When Thurman’s three-year career at Arkansas was done, he had started every one of the 102 games he played in. He averaged 16 points, 4 rebounds and 3 points and played in two National Championship games. The more memorable one for Thurman was in 1994 vs. the Duke Blue Devils.

The 1993-94 Razorbacks were ranked No. 1 a total of nine weeks during the season before finishing at No.2 in the AP Poll. They earned a No. 1 seed in the Midwest bracket and defeated Michigan and Arizona to get to the final game. Thurman averaged 16 points during Arkansas’ Tournament run while shooting 41 percent from three. In the National Championship, Thurman hit the game-winning three-pointer with 50 seconds left to give the Razorbacks a 73-70 lead.

Arkansas would reach the Championship again the following season (more on that later) and Thurman then declared for the 1995 NBA Draft. In a 2007 ESPN story, Thurman said his college coach, Nolan Richardson, spoke with NBA contacts and was told Thurman would be a first-round pick. Unfortunately, this would not be the reality and Thurman went undrafted. Thurman would play in the CBA and overseas leagues from 1995-2006.

After his playing days were done, Thurman became an assistant coach at his alma mater. He remained with the program until 2019. Thurman is currently the basketball coach at Parkview Arts and Science Magnet High School in Little Rock, Arkansas.

While Miles Simon was not an immediate starter for Arizona, he still made a splash in his Freshman season by shooting 45 percent from three. The spotlight would not shine bright on Simon until his Junior year when Arizona would make it to the National Championship vs. Kentucky.

The deep postseason run put Simon on the national map and he was voted a first-team All-American and earned a spot on the All-Pac 10 team in 1998. Throughout his four-year career Simon averaged 15 points, 4 rebounds and 4 assists, while shooting 37 percent from three-point land. He also received the ultimate honor of having his No. 34 retired by Arizona.

Simon’s peak moments came in the 1997 Tournament run by Arizona. The Wildcats beat three  No. 1 seeds on their way to the title, taking down Kansas, North Carolina and eventually Kentucky. Simon had a red-hot tournament, averaging 22 points a game and winning the Tournament’s Most Outstanding Player award. He had 30 points, 6 rebounds and 4 assists vs. Providence in the Elite Eight, and then another 30 points as Arizona upset Kentucky 84-79 in overtime.

Simon would be drafted in the second round (No. 42 overall) by the Orlando Magic in the 1998 NBA draft. He appeared in five games for Orlando, playing a total of 19 minutes and scoring just 3 points. He then went to the CBA and won the 2002 MVP and Finals MVP as his team, the Dakota Wizards, won the title. Simon would then play overseas from 2002 through 2004.

After his playing career Simon became an assistant coach at Arizona from 2005-2008. He returned to coaching in 2017 as an assistant with the Los Angeles Lakers and won a title with the team in 2020. In 2021 he became the head coach of the Lakers G-League team, the South Bay Lakers.

UCLA eased O’Bannon into his college career, bringing him off the bench as a freshman for 12 minutes a game. That all changed once O’Bannon’s Sophomore season started as he would start 93 out of 94 games in his next three seasons with the Bruins.

O’Bannon averaged 18 points and 8 rebounds a game through his sophomore to senior years. He also shot 40 percent from three during this time, which was really impressive for a forward considering the era he played in. O’Bannon was a three-time member of the All-Pac 10 team and his No. 31 was retired by UCLA. His 1995 season was his crowning achievement as he took home the following honors:

The 1994-95 UCLA Bruins were a top 10 team throughout the season and were No. 1 in the final AP Poll. The Bruins were the 1-seed in the West bracket and made it to the National Championship game vs. the defending Champion Arkansas Razorbacks (with Scotty Thurman). O’Bannon went off in the final game, scoring 30 points and grabbing 17 rebounds. UCLA beat Arkansas 89-78 to secure their title.

The New Jersey Nets took O’Bannon ninth-overall in the 1995 NBA Draft. O’Bannon would play 128 games in the NBA for the Nets and Mavericks, averaging just 5 points in 16 minutes per game. From 1998-2004, O’Bannon played overseas before retiring from basketball.

After his playing days, O’Bannon was the lead plaintiff in O’Bannon vs. NCAA antitrust class action lawsuit. The suit is motivated by the NCAA’s use of player likenesses for commercial purposes, such as video games. O’Bannon has also sold cars and been a probation officer in Nevada.

When Trajan Langdon joined the Blue Devils they had averaged 29 wins over the previous five seasons. Langdon’s Freshman year would be a rebuilding one for Coach K and team, though, as they went 13-18. Langdon started 24 of 31 games and was the team’s third-highest scorer, averaging 11 points and hitting 43 percent of his threes. He suffered a knee injury before his sophomore year which caused him to miss the whole season.

After four seasons in five years at Duke, Langdon averaged 15 points, 3 boards and 2 helpers with 43 percent three-point shooting. He was a three-time All-ACC team selection and was a Second Team All-American in 1999 and Third Team in 1998. His Tournament record with Duke was somewhat underwhelming as the Blue Devils lost in the second round in 1997 (vs. Providence) and in the Elite Eight in 1998 (vs. Kentucky). The 1999 team would get Langdon and team to the brink of March Madness immortality.

In the 1998-99 season, Duke went 37-2 and 16-0 in the ACC. They were the 1-seed in the East bracket and had five future NBA players on the team including Langdon (Elton Brand, Shane Battier, Corey Maggette, William Avery). Langdon would make the All-Tournament team as he averaged 18 points and 4 rebounds while shooting a blistering 53 percent from beyond the arc. Despite Langdon’s 25 points in the National Championship (5-10 from downtown), Duke fell to the UConn Huskies. The pivotal play came when Langdon traveled with seven seconds left and Duke trailing 75-74. The Blue Devils would go on to lose 77-74.

In the 1999 NBA Draft, the Cleveland Cavaliers selected Langdon with the 11th-overall pick. Langdon played 119 games for Cleveland averaging 5 points a game and shooting 40 percent from behind the arc. From 2002 to 2011, Langdon had an incredibly successful international career. He won championships in the Turkish, Italian, Euro (2x) and Russian (6x) leagues.

After he stopped playing Langdon became a scout for the San Antonio Spurs and performed that role until 2015. Then Langdon became the assistant GM of the Brooklyn Nets from 2016-2019, before taking on his current role as GM for the New Orleans Pelicans.

John Wallace was another starter from day one for the Orangemen and started 126 of his 127 career games. As a freshman, he averaged 11 points, 8 boards and one assist as Syracuse went 20-9. Wallace was named to the Big East’s All-Freshman team during his first season.

Over Wallace’s four years playing at the Carrier Dome, he averaged 17 points, 8 rebounds and 2 assists. He was named to the All-Big East team three times and was a Second team All-American in 1996. The Orangemen were also 11-3 in the NCAA Tournament with Wallace, including a run all the way to the National Championship game in 1996. Wallace’s No. 44 was also retired by Syracuse.

Syracuse was 29-9 in 1996, finishing 15th in the Final AP Poll and earning a 4-seed in the West bracket. Wallace had averaged a 27 points, 8 rebounds and 5 assists in two games in the 1995 Tournament and was looking to be even more of a force the following year. He put up an average of 22 points and 8 rebounds in the Orangemen’s six games, including a 30-point, 15-rebound game in a Sweet Sixteen matchup vs. Georgia. Wallace was the leading scorer with 29 points and 10 rebounds in the National Championship vs. Kentucky. However, it was not enough as the Wildcats won 76-67.

In the 1996 NBA Draft, Wallace was selected at 18th overall by the New York Knicks. This meant Wallace would play in his home state of New York in both college and the pros. His time at Madison Square Garden would initially be short-lived as Wallace was traded to the Toronto Raptors after his rookie season. After two seasons in Toronto, Wallace would re-sign with the Knicks in free agency. The Knicks then traded him again, this time to Dallas after one season. Wallace would finish his NBA career after 381 games and averages of 8 points, 3 rebounds and a sole assist.

Wallace’s post-playing career began after a season in Italy when he joined the Knicks as a team ambassador. In 2014, Wallace began making guest appearances as an analyst on the Knicks’ MSG network. He would then become a full-time member of MSG’s “People Talking Sports” in 2018. Wallace also started his own podcast “Power Forward w/ John Wallace” in 2020.

March Madness: A Time to Remember

There are going to be a lot of new memories made in the 2022 NCAA Tournament. Buzzer beaters, insane upsets and all-time performances are all likely. But like the collection of players we’ve remembered in this series, some won’t go on to see added glory in the NBA. Be sure to enjoy these players in the moment and try not to forget about them if they don’t become All-Stars.

More: The 2012 Syracuse Orange are Easily the Best College Basketball Team to Never Win a Title