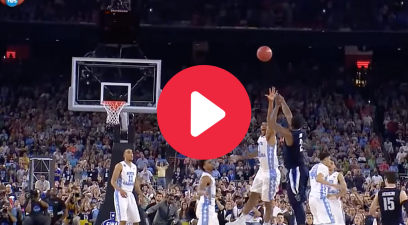 “I miss the old Big East, straight from the go Big East.”

Those were the Kanye West lyrics, right? My fuzzy hip-hop history aside, there’s arguably never going to be a college basketball conference as beloved as the Big East in its heyday. Basketball was the league’s M.O. from its inception in 1979 until college football invaded the conversation and broke up the Big East as we knew it ? Led by seven non-FBS Catholic universities, the league restructured to its present form in 2013.

The Connecticut Huskies and head coach Jim Calhoun were the Big East’s top dog, entering the 1996 Big East Tournament with a 17-1 record in conference play, a third-straight regular season title, and the No. 1 overall seed. Powering the Huskies was future Naismith Memorial Basketball Hall of Fame inductee Ray Allen, who was the 1996 Big East Player of the Year.

At the bottom of the bracket, the tournament’s No. 2 seed was the Georgetown Hoyas. John Thompson’s fiery squad ranked among the nation’s top 10 teams almost the entire season and were led by two-time Big East Defensive Player of the Year Allen Iverson. Just a sophomore at the time, A.I. had blossomed into arguably the most dominant player in America on both ends of the floor.

The collision was inevitable.

UConn and Georgetown powered their way to the 1996 Big East Championship Game. As you’d expect, the game was an all-time classic. Not only were Allen and Iverson focal points, but All-Tournament teammates in Connecticut’s Travis Knight and Georgetown’s Victor Page made this title game must-see television with a No. 1 seed in the NCAA Tournament up for grabs.

The Hoyas took control and built a 74-63 with less than five minutes remaining. After starting the game 4-of-5 from the floor, Ray Allen missed 14 straight shots until the game’s biggest moment arrived.

Mounting a comeback and trailing by one with 38.1 seconds left, UConn ran a pick-and-roll handoff to find its star. Iverson switched onto Allen at the top of the key, and the matchup everyone wanted had arrived.

With a wildly-tough and off-balance jumper, Allen hit the go-ahead shot over Iverson. (The legendary Dick Vitale went bananas on the call.) Georgetown failed to score on the other end, and UConn claimed the title with a 75-74 victory.

The 1996 NCAA Tournament wasn’t as kind to Connecticut, who lost to Erick Dampier and Mississippi State in the Sweet Sixteen. Ray Allen’s senior season ended short of the ultimate goal, and the All-American became the fifth-overall pick of the 1996 NBA Draft.

Georgetown, powered by its diminutive point guard, advanced to the Elite Eight before John Calipari’s Massachusetts Minutemen knocked them off. (Turns out, UMass star Marcus Camby was receiving illegal benefits. Both he and Calipari were gone the following year, and the school’s only Final Four appearance was wiped from the NCAA record books.)

Iverson left school and became the Philadelphia 76ers’ No. 1 overall pick in the 1996 NBA Draft.

Allen vs. Allen in the NBA

On this day in 1996, Allen Iverson and Ray Allen made their NBA debut against each other

🔺 The Answer led all scorers with 30 points
🔺 Shuttlesworth finished with 2 threes, 3 steals and the W pic.twitter.com/h90EFkrbAl

Forever linked by their Big East battle, the pair of lottery picks went on to Hall-of-Fame careers, each finding success that complimented their styles.

For Ray, he played 18 seasons as a member of the Milwaukee Bucks, Seattle SuperSonics, Boston Celtics and Miami Heat. Allen made 10 All-Star games, two All-NBA teams, and won two NBA Championships. He remains the NBA’s all-time leader in 3-point field goals made (2,973) and attempted (7,429).

Jesus Shuttleworth had his No. 34 retired at the University of Connecticut in 2019.

UConn will retire Ray Allen and Rebecca Lobo's numbers during ceremony in March, per @DaveBorges pic.twitter.com/U3D3ww8ZkL

Allen Iverson shined as “The Answer” during his 14 seasons, most of which saw him carry a below-average roster to incredible heights. With his league-leading 31.1 points per game, Iverson was named the NBA’s Most Valuable Player in 2001 as Philadelphia reached the NBA Finals, losing in five games to Kobe Bryant, Shaquille O’Neal and the Los Angeles Lakers.

Iverson was the NBA’s leading scorer four times and led the league in minutes per game eight times during his career with the Sixers, Denver Nuggets, Detroit Pistons and Memphis Grizzlies. He was 1997’s Rookie of the Year, an 11-time All-Star, two-time All-Star Game MVP, seven-time All-NBA selection (three times to the first team), and his No. 3 jersey was raised to the rafters in Philly in 2014.

The Hall of Famer’s 29.7 points per game in 71 playoff games ranks second in NBA history behind only Michael Jordan.

On this date in 2001, Allen Iverson won the MVP award.

“I wasn’t a point guard, I was a killer.” 💯 pic.twitter.com/Cfgca87pSY

Knowing what we do today, that 1996 Big East Championship holds so much more weight, especially for those who had the chance to watch the superstars duel in an all-time classic. Who was truly the better player is a debate that’ll rage forever.