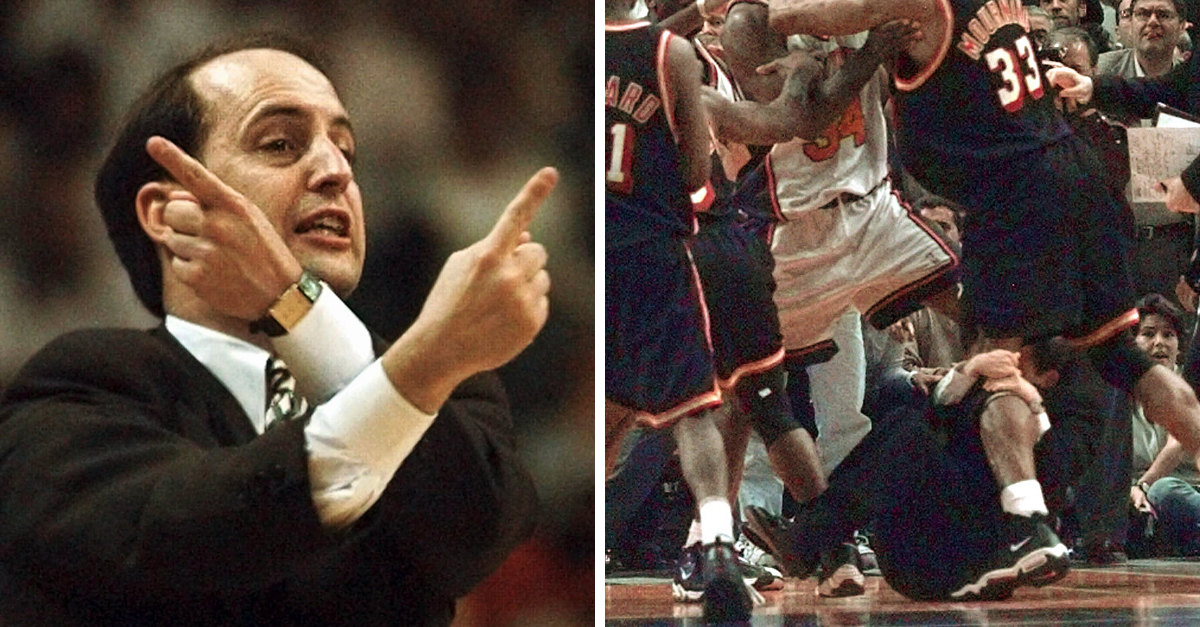 The biggest kid in the neighborhood has the ball, and he’s running upfield. You ? the youngest and smallest ? are the only one standing between him and the end zone. There are two options: One, fall to the ground and fake a cramp. It’s just too hot out there and you didn’t get enough water. You hate to see it. Two, approach the ball carrier and wrap your entire body around him like a koala. It’s the only chance to bring him down. It’s a win-win. If you can successfully tackle him, you did your job. If you can’t, you get the ride of a lifetime from Trent who hit puberty at 12 and has a 5 o’clock shadow.

Jeff Van Gundy is familiar with the latter.

The Miami Heat and New York Knicks squared off in the first round of the 1998 NBA playoffs. In the final seconds of Game 4, Heat center Alonzo Mourning set a screen on Knicks forward Larry Johnson. The play proceeded as normal for a few seconds until the two tangled up. Johnson shoved Mourning away and the Heat center retaliated with a right hook. Johnson threw a haymaker of his own.

It was heartwarming to see the two former Charlotte Hornets teammates catch up.

Van Gundy sprang into action. The Knicks coach beelined on the court and latched himself around Mourning.

The seven-time NBA All-Star took a few steps and Van Gundy slid down all the way to his leg. He held on for dear life; Alonzo Mourning’s leg became Van Gundy’s eucalyptus tree. Meanwhile, the benches cleared and the Madison Square Garden crowd bellowed in response. The small brawl disseminated. The Knicks won the game 90-85.

“Fortunately for these guys, they’re both awful fighters.”

Patrick Ewing recounted the event on ESPN’s “The Jump” in May 2020.

Johnson, Ewing, Charles Oakley, John Starks, Marcus Camby, and company won the five-game series. They advanced to play former Knick Mark Jackson and the Indiana Pacers in the Eastern Conference semifinals. The Pacers defeated the Knicks 4-1. The Pacers fell to Michael Jordan and the Chicago Bulls in the conference finals, who went through the Utah Jazz in the NBA Finals to complete “The Last Dance.”

Van Gundy left the Knicks in 2001 and was named head coach job of the Houston Rockets in 2003. He was fired in 2007. Jeff’s brother, Stan Van Gundy, coached the Heat from 2003-05. He was last in the NBA as the head coach and president of basketball operations for the Detroit Pistons from 2014-18.

The image of Van Gundy clinging to Mourning’s leg is forever imprinted in NBA history. I would say he needs a hold back guy, but then we’d be deprived of this glorious sequence.