The average height of an NBA player is 6-foot-7, which is only a tad taller than the 5-foot-9 the average American male stands. The tallest NBA players, however, all hover above seven feet, and some of them use their gargantuan height as a stepping stone to Hollywood.

These skyscraper human beings may not compare to the man whose head peeks into the stratosphere and owns the Guinness World Records tallest man distinction, but basketball's beanstalk-like ballers are some of the largest humans to walk the United States and the Earth, for that matter.

The NBA Hall of Fame is littered with them -- Yao Ming, Ralph Samson and Arvydas Sabonis -- and many of the tallest to ever play a game in the league hail from countries outside the states (Sudan's Manute Bol, Romanian big man Gheorghe Muresan, Russian shot-clocker Pavel Podkolzin, Germany's Shawn Bradley). Many of these players had some very odd careers. Bol, for example, is the only player in NBA history to block more shots than baskets made during his NBA career.

Currently, the largest of the NBA's tall players are all at least seven feet tall. In a league where players are getting taller and taller while being more athletic and versatile, it seems like every team has a skilled 7-footer these days. Standing right at the seven-foot mark are guys like Nikola Jokic, Mo Bamba, Joel Embiid, Brooke Lopez and Hassan Whiteside, each of which brings their own skill set such as being their team's shot blocker and dishing assists from the post. Whether you're the defending champion Golden State Warriors, a bench player for the Milwaukee Bucks or playing in the All-Star Game, it doesn't hurt to have one of these men defending the goal and racking up blocked shots.

But just who are the other gargantuan humans we see every NBA season, and who are the tallest in NBA history? Let's take a look. 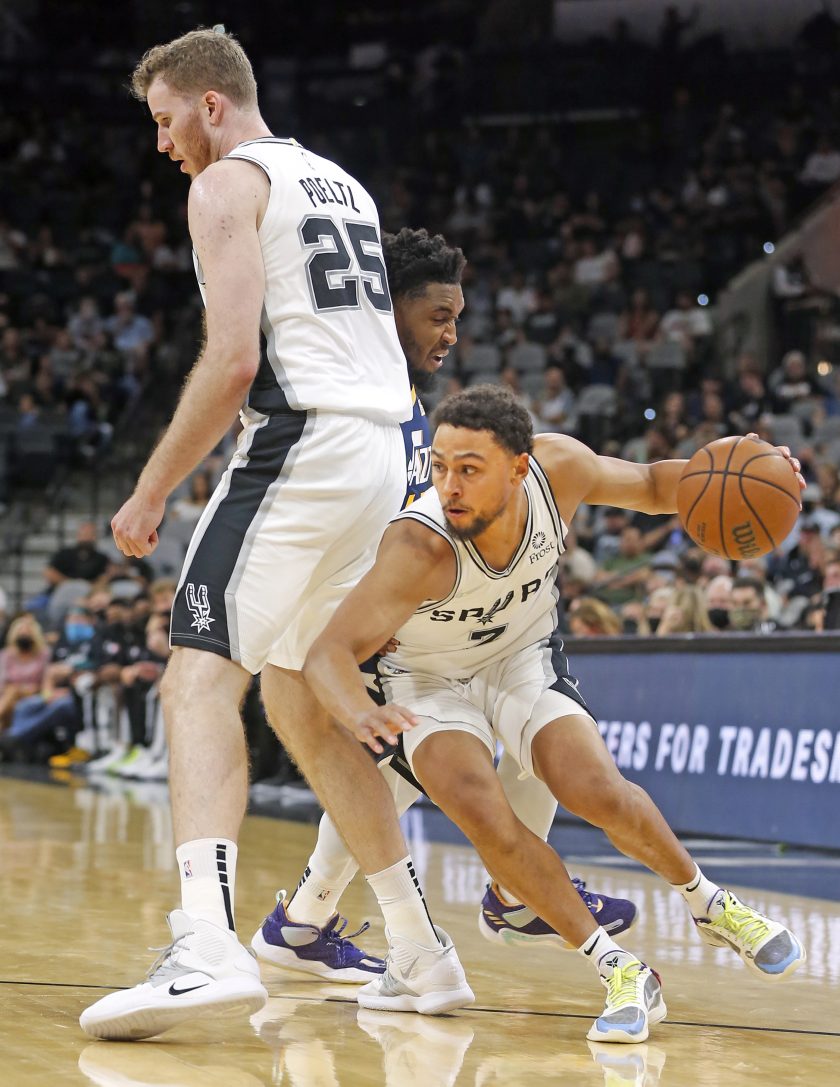 The Austrian center was the ninth-overall pick of the 2016 NBA Draft by the Toronto Raptors, but his most famous NBA contribution to this point was as trade bait alongside DeMar DeRozan, when San Antonio sent Kawhi Leonard and Danny Green north to Canada. Poeltl set a career-high in rebounding with the Spurs during the 2020-21 season and is growing into one of the league's better rim protectors. 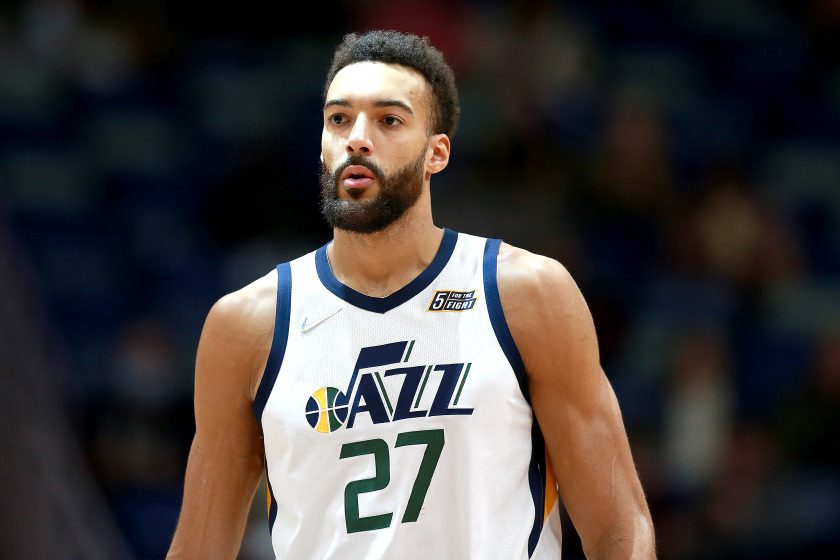 There's no doubt Gobert is one of the best centers in the NBA, and his height has a lot to do with that. The "Stifle Tower" was born in France and quickly became one of the better defenders in the league after the Denver Nuggets drafted him in 2013 and traded him to the Utah Jazz. He led the NBA in blocks for the 2016-17 season has won three NBA Defensive Player of the Year awards, making him one of four basketball players in history to win the honor three times. 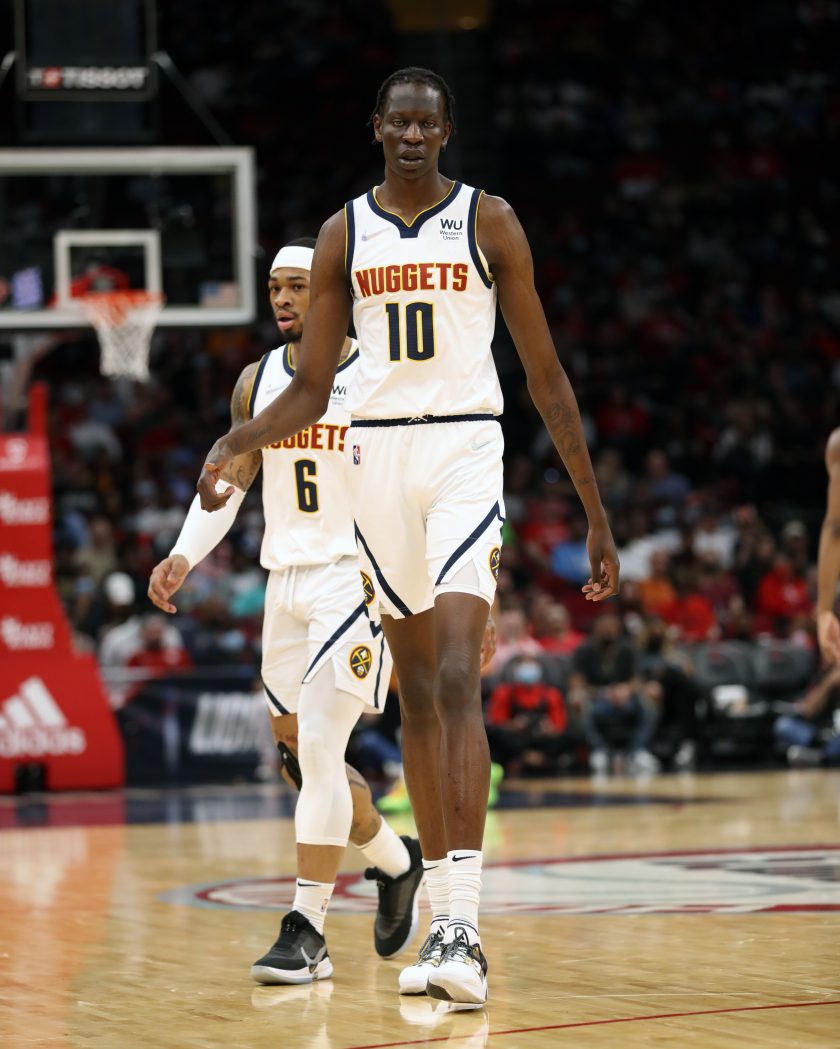 Bol Bol, the son of Manute Bol, isn't as tall as his dad but still stands at a humble 7-foot-2. The Sudanese basketball player has a smooth stroke for a big man and even has some ball-handling skills. Bol may not win an MVP, but if his skills progress he could win the Most Improved Player award and potentially be an NBA All-Star one day. 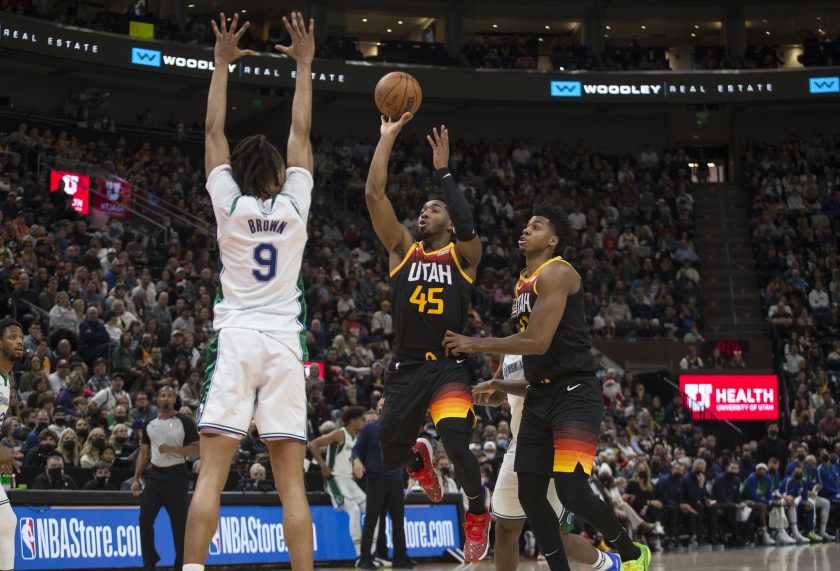 One season with the UCLA Bruins was all Moses Brown needed to make an impact. The McDonald's All-American from Archbishop Molloy High School in Queens was named to the Pac-12 Conference's All-Freshman team before declaring for the 2019 NBA Draft. Brown went undrafted and didn't make a huge impact with the Portland Trailblazers and Oklahoma City Thunder, but maybe he'll turn things around in Dallas. 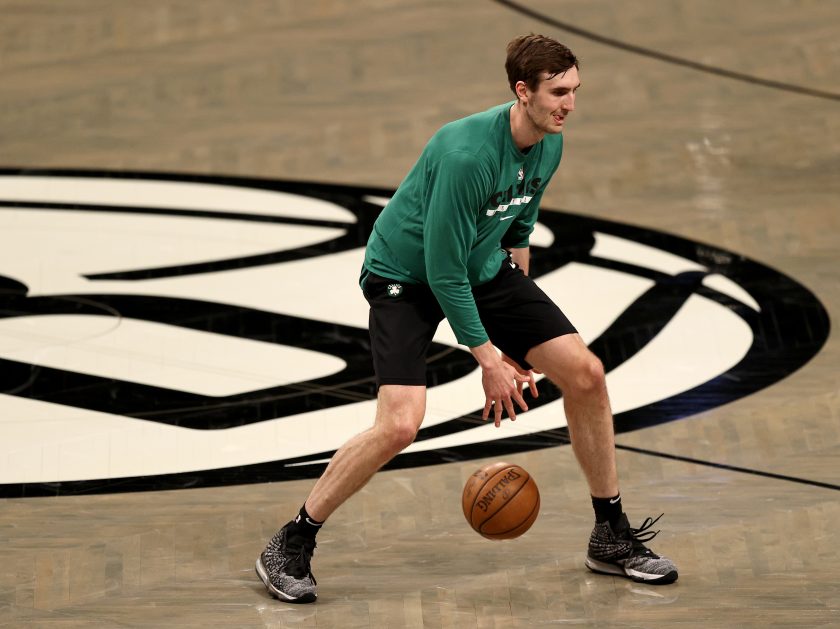 Kornet may be only 26 but he's still something of a journeyman. After going undrafted in the 2017 NBA Draft, he signed with the Knicks. He's spent time with the Bulls, Bucks, Cavaliers and now Boston Celtics, who just missed out on an NBA Championship in 2022. 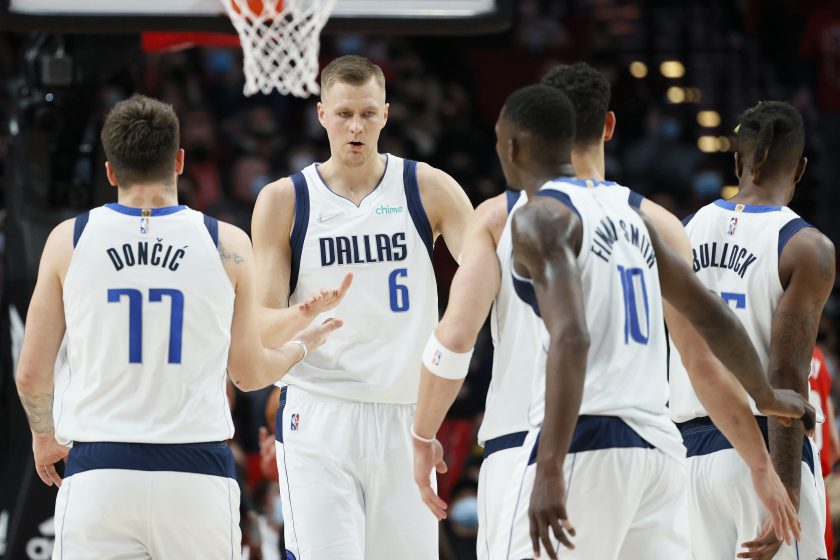 Porzingis became a household name with the New York Knicks after he was drafted fourth overall in the 2015 NBA Draft. The 7-foot-3 Latvian center was an All-Star in 2018 after averaging more than 22 points per game. His nickname, Unicorn, was given to him by Kevin Durant for his array of abilities -- shooting, defending, you name it -- all at 7 feet and 3 inches tall. He started playing basketball at 6 and by age 12, he already stood 6-foot-8. 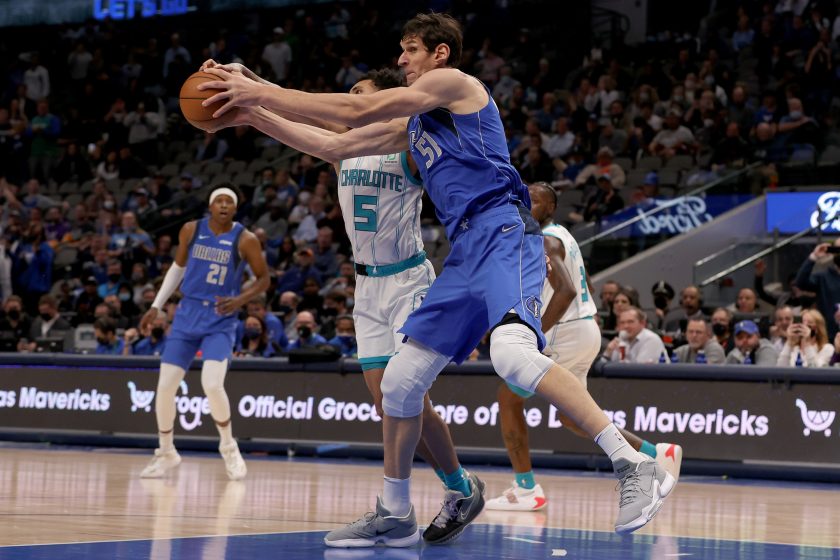 Boban has the ability to make any human on this earth look tiny. From his hands to his head to, well, his entire body, he's a larger than life man. The 7-foot-3 Serbian beast plays center for the Mavericks and has played for the Los Angeles Clippers, Detroit Pistons, Sacramento Spurs and Philadelphia 76ers. At 14 years old, he was incredibly already 6-foot-10. If you haven't seen him hold a basketball the way most people hold baseballs, you should check it out.

It's worth noting that three of the seven tallest guys in the league play for the Mavericks. Stick those guys around the basket and a trip to the NBA Finals is within reach. 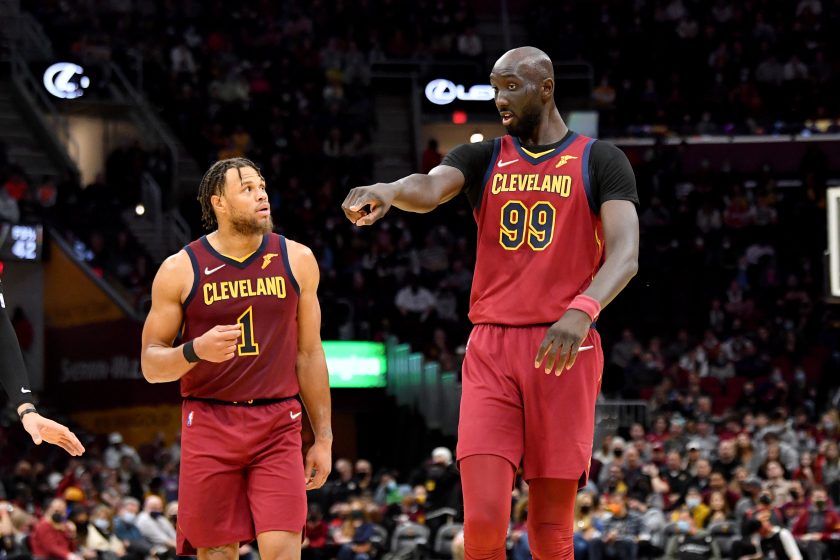 Tacko Fall took the world by storm while at UCF. His oh-so-effortless dunks captivated fans, as did the touching story of when his mother got to see him play live. At 7-foot-6, Fall is the tallest active member of an NBA team. The Senegal native started his career with the Boston Celtics and joined the Cleveland Cavaliers in 2021, where he alternates between the NBA and G-League. While not as well-rounded as some of the names before him on this list, his rare skyscraping height makes him a unique commodity when it comes to gobbling up rebounds and shooting a high field-goal percentage. It also makes him one of the tallest living humans on Earth. 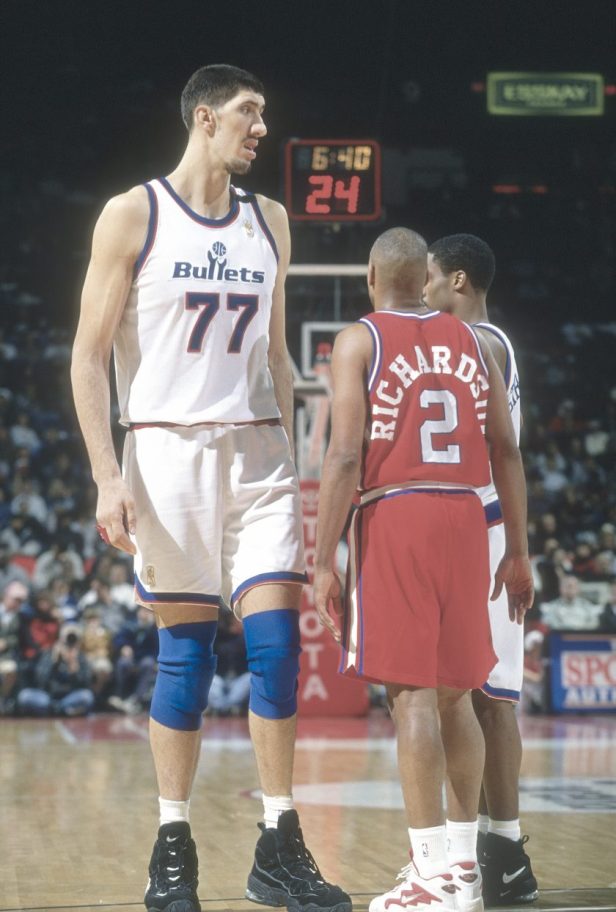 The Shortest Player in NBA History

This article was originally published December 16, 2019.