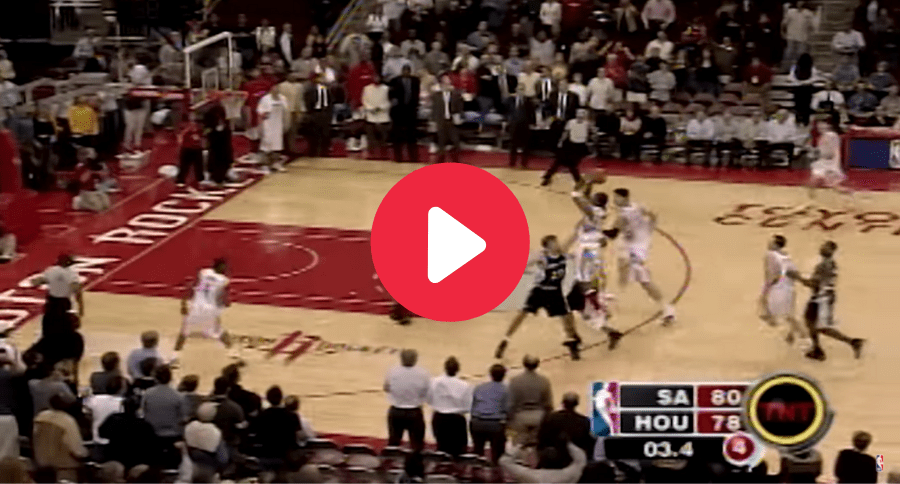 Tracy McGrady hit a three at the top of the key to bring the Houston Rockets within five of the San Antonio Spurs.

The score stood 76-71 with 35 seconds remaining in the fourth quarter. A majority of the Toyota Center crowd had called it a night, and the mighty Spurs looked like they had this one in the bag.

Not on McGrady’s watch.

The Spurs make two free throws on the other end to extend the lead by seven.

Yao Ming sets a ball screen for McGrady a few feet beyond the arc. He dribbles to his right, pump fakes—warming up Rockets fans for the James Harden special—gets Tim Duncan to bite, draws a whistle, and nails another triple through contact. He converts the free throw to complete a four-point play, making it 78-75 Spurs.

San Antonio hits two more free throws on the other end. 80-75. The Rockets call a timeout to advance the ball past half court. On the inbounds pass, T-Mac leaps over Tony Parker and Bruce Bowen to corral the ball. He dashes to the near-identical spot of the previous three, just below the “TOYOTA CENTER” logo with Bowen on him. He pulls up and nails a third 3-pointer. Spurs lead 80-78.

The Spurs ensuing possession was chaotic. Brent Barry had trouble finding an open man on the inbounds pass before delivering the ball to Devin Brown near the corner. Brown, expecting a foul, turns baseline to evade Rocket defenders but slips and coughs up the ball. Who else but Tracy McGrady ends up with it. The Rockets superstar sprints down the court and diverges to the left side of the arc. He pulls up slightly off-center for the game-winner.

Parker misses a desperation three for the win. It had no chance. Spurs head coach Gregg Popovich and Duncan wore stoic looks of disbelief. Rockets head coach Jeff Van Gundy wasn’t buying it. He was furious they relied on a miraculous stretch from McGrady to bail them out of an otherwise poor performance. (Come on, Jeff. Live a little!)

The comeback belongs in the conversation of greatest fourth-quarter resurgences in NBA history with the 1977-78 Milwaukee Bucks, who overcame a 29-point deficit to defeat the Atlanta Hawks 117-115.

A two-time NBA scoring champion and seven-time All-Star, T-Mac is among the most talented NBA players of his generation along with Kobe Bryant, Kevin Garnett, Allen Iverson, and Duncan. In his prime, he could put the ball in the hoop against anybody; whether that be with dunks, finessed layups, or jump shots. He didn’t have much success in the postseason with the Toronto Raptors, Orlando Magic, Rockets, or Hawks, but he participated in the 2013 NBA Finals against the Miami Heat as a member of the Spurs. He was inducted into the Naismith Memorial Basketball Hall of Fame in 2017.

December 9, 2004 holds a special place in T-Mac’s esteemed NBA career and league folklore. That night, he had the fastest gun in all of Texas.

This article was originally published May 13, 2020.