Saturday night of NBA All-Star Weekend is reserved for basketball's highest flyers. Michael Jordan and Dominique Wilkins had their battles. Dwight Howard and Nate Robinson took to the skies in the 2000s. Zach LaVine and Aaron Gordon rang in the new generation.

The dual-colored Toronto Raptors jerseys, the camcorders, and a tasteful dash of personality blended to form "Vinsanity."

"Vinsanity is Born at the 2000 Slam Dunk Contest

The first dunk is my personal favorite. Carter takes the time to map out the airway. He scopes out the basket and confidently jogs back near half-court to gear for takeoff. He zooms down the runaway building speed, explodes, and spins against his body for a reverse-360-windmill flush -- A no doubt 50. Carter made a dunk with a 100 degree of difficulty look elementary.

The second dunk starts behind the hoop. Carter takes one dribble, gathers, completely rotates, and throws down a fully-extended windmill. Every judge other than Kenny Smith gave Carter a 10. He scored it a 9, diminishing the dunk's total score to 49. Good thing Vince was only getting started.

Carter enlisted cousin and Raptors teammate Tracy McGrady's help on the third dunk. T-Mac's job was to bounce the ball as the alley to Carter's oop. In the only slip up of the night, the pass came in too high and Carter couldn't control it. The second attempt went according to plan. Carter sprung up and finished a between-the-legs dunk. He struck a pose pointing to the sky and calmly strutted, X-ing his arms and mouthing, "it's over." A redeeming 50. If there was any doubt about who owned the rim that night, it was put to rest.

At this point, competitors Ricky Davis, rookie Steve Francis, Larry Hughes, McGrady, and Jerry Stackhouse were as much spectators as the rest of us. Carter approached the basket and skied, finishing with his elbow through the rim. It took a few seconds for NBA fans to register what they just witnessed. Upon a second watch, it's evident how high Carter flew to get this dunk down. He nearly hit his head on the rim. Another 50. This is the only dunk I could get down in NBA Live 2005's Dunk Contest. Turns out, frantically pushing random buttons can only do so much.

By the fifth and final dunk, Carter had the contest all but wrapped up and only needed a 42 for the win. He sprinted from the other end of the court and took off a step in front of the free-throw line for a two-handed slam. He truly flew and unquestionably earned the Dunk Contest crown. Carter capped off the weekend as a starter in the NBA All-Star game. 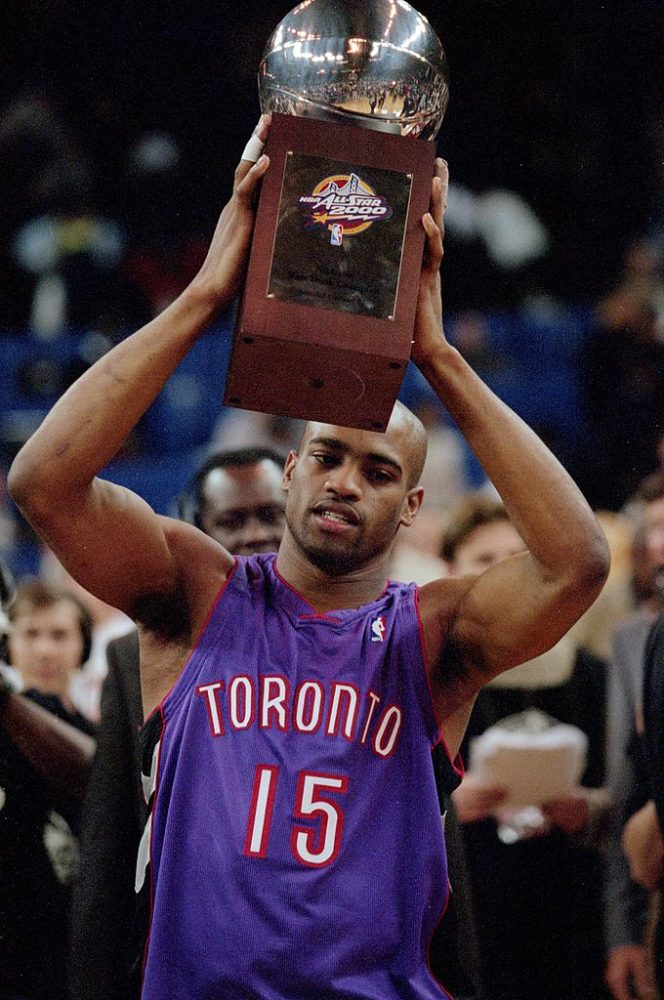 Carter's performance secured a spot in NBA history with its creativity, bravado, and impeccable display of dunking. He participated in the contest only this once and went out undefeated. In the 2013 contest, Raptors guard Terrence Ross paid tribute to Carter by wearing his jersey and booming a 360-tomahawk dunk off the side of the backboard.

Not even the best dunkers like Jordan, Wilkins, Spud Webb, or Dr. J could throw it down like Vince. 22 years later, I wouldn't doubt if Vinsanity can still flush it with authority.