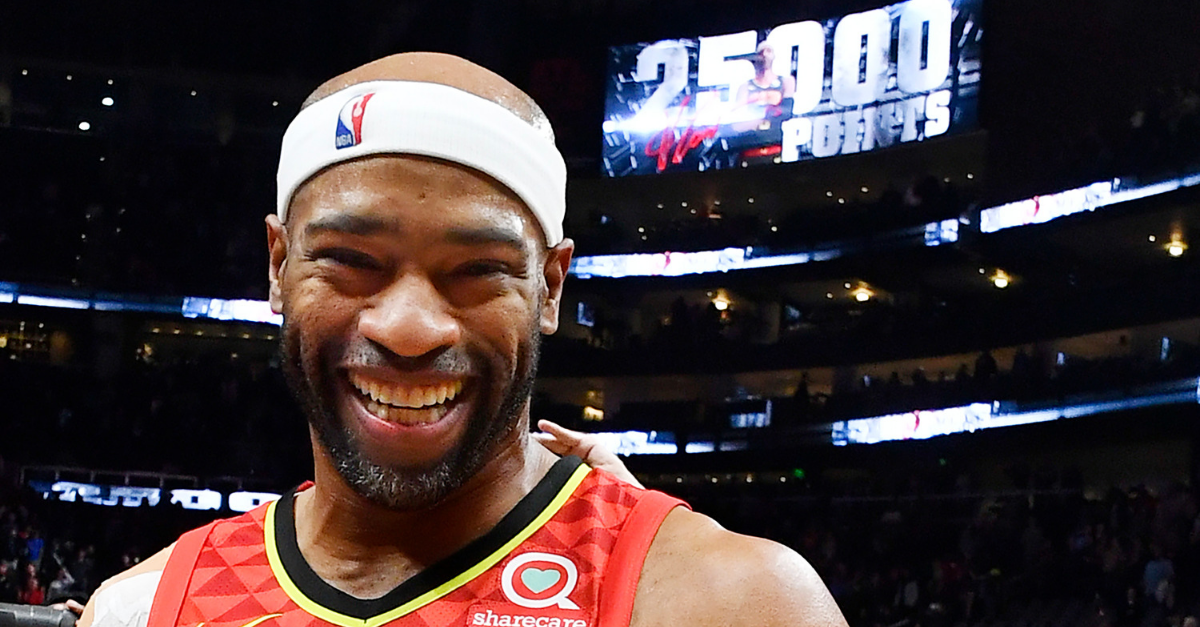 NBA legend Vince Carter was a trailblazer in the game of basketball. For 22 seasons, Vinsanity gave us highlight reel dunks, game-winning shots, and he’s finally called it quits on his legendary career. The 43-year-old played for the eighth team of his career with Atlanta, who ranked near the bottom of the NBA’s Eastern Conference during the 2019-20 season before the coronavirus pandemic put the season on pause.

The eight-time NBA All-Star selection may be well past his prime, but 1995’s Florida Mr. Basketball is sitting on a legendary career. On June 24, 1998, the Golden State Warriors drafted University of North Carolina guard Vince Carter fifth overall in the NBA Draft, who then traded him to the Toronto Raptors for fourth-overall pick Antwan Jamison. The rest is nothing but a long, long history.

After spending time with Toronto, Carter went on to play for the New Jersey Nets, Orlando Magic, Phoenix Suns, Dallas Mavericks, Memphis Grizzlies, Sacramento Kings, and now with the Hawks. The 2000 NBA Slam Dunk Contest Champion is a walking highlight reel who has impacted two generations of NBA stars.

In honor of Daytona Beach’s very own Vincent Lamar Carter and his 21 NBA seasons, let’s look at some of the things that are younger than Vinsanity’s historic career that few NBA players could even dream of.

Because one is never enough. Happy #NationalFrenchFryDay!

The multinational technology company launched on September 4, 1998. Today, Google is the most visited website on the planet, employs over 85,000 people and is also its own verb. Carter was already four years removed from Mainland High School when Google first launched. A high school kid without Google. Imagine that?

The first BlackBerry phone released in January 1999. The first iPhone hit markets in June 2007. Vince Carter had played in his eighth NBA All-Star game by the time you had an iPhone in your hand.

Time to celebrate! #FamilyGuy has scored three #Emmys nominations for Outstanding Voice-Over Performance (@macfarlaneseth & @alexborstein) – As well as Outstanding Sound Mixing For a Comedy or Drama Series (Half-Hour) and Animation! 🙌🏽

Premiering January 31, 1999, Family Guy has since racked up 16 seasons, 309 episodes, 24 Emmy nominations and seven wins. No, Vince Carter has not made his way onto a guest spot on the show.

Who’s read all 7 of these magical books?? #harrypotter pic.twitter.com/lYFMGFezt6

The first book in the series, “The Sorcerer’s Stone,” was released in the United States September 1, 1998. Since then, it’s become a cult-classic and even has its own amusement park. Take that, Vince Carter.

The first rule of Fight Club is you don’t talk about Fight Club, so I’ll make it quick: the movie starring Brad Pitt and Edward Norton premiered September 21, 1999.

In February 2005, YouTube launched and became, and still is today, the internet’s go-to medium for video content. Vince Carter dunks are still one of the best watches on YouTube.

7. Two of His Hawks Teammates

Trae Young behind the back to Vince Carter for 3!#TrueToAtlanta x #SacramentoProud

Today in 2000: 'Gladiator' hits theaters — Russell Crowe is "fast on his way to becoming a movie star." https://t.co/WJklrLvFVN pic.twitter.com/EAQxV1PakD

The movie hit theaters May 5, 2000 and grossed $457 million. ‘Gladiator’ won five Oscars including Best Picture and Best Actor. I mean, are you still not entertained?

It was the summer of 2000. In Rotterdam, the very 1st production Toyota #Prius to be sold in Europe reached the continent. #TBT #10million pic.twitter.com/3z9Fw3qxEp

In 2000, the Prius was introduced to the United States and is marketed as one of the cleanest vehicles on the road today. Often laughed at, but never duplicated, Prius owners everywhere stand by their brand.

#Wikipedia founder Jimmy Wales expanded on his #Wikitribune project and on #China during a talk in #Taiwan. https://t.co/O8d5cB8v0I pic.twitter.com/6UYvIXAf4S

Wikipedia is the world’s largest user-generated free encyclopedia in the world. Available in 301 languages, the site first launched on January 15, 2001. By that time, Carter was named the NBA Rookie of the Year, was All-Star selection, and collected a gold medal at the 2000 Olympics in Sydney.

July 26,2000 The file-sharing service Napster is ordered by a US federal judge to cease trading copyrighted music files in the next 48 hours THANKS METALLICA 😂 pic.twitter.com/svWpFhoEVs

On June 1, 1999, Shawn Fanning and Sean Parker turned the music world upside down with the release of this peer-to-peer audio file sharing service. Only lasting until July 2001, Napster became the start of MP3 audio sharing in the digital world.

Mark Zuckerberg launched The Facebook on February 4, 2004 from his University of Harvard dorm room. In 2017, Facebook’s reported revenue was north of $40 billion. Unfortunately for Vince Carter, his net worth is only around $65 million.

Be part of the most dynamic and diverse team, and entertainment venue in Atlanta. The @ATLHawks and Philips Arena are committed to growing our family with fun people to create lasting memories! APPLY: link in bio

The arena Vince Carter is playing his 21st NBA season in hasn’t been around as long as Carter has. Philips Arena opened September 18, 1999 and plays host to the Hawks, the WNBA’s Atlanta Dream, and the now-departed Atlanta Thrashers of the NHL.

The show first aired January 10, 1999, and we still don’t know whether Tony Soprano was murdered or not. Numerous Emmy and Golden Globe awards define one of the greatest television series of all time. Don’t worry, a prequel is apparently in the works.

The stage is set. #TexansCamp

The Texans claim five division titles in their short existence after becoming the NFL’s 32nd franchise in 2002. The sad part is that Vince Carter is probably more recognizable than an entire football organization.

Book a #Segway #Tour in #Boston today! Whether it is a #corporate or a #family #event, it's always unforgettable 🤩https://t.co/GX3eE3bHkq pic.twitter.com/hlfGItINvR

Remember these things? The first one was unveiled in December 1999. Today, people buy them for personal transportation, public safety and even around their own office! You can buy a Segway i2 SE for only $5,999.

18. Discovering the Existence of Water on Mars

BREAKING: @ESA may have just found the first present-day body of liquid water on Mars https://t.co/tJE1d0d9IC

Got questions? We’ve got answers, ask away! pic.twitter.com/W723X0ha4w

On December 6, 2006, NASA’s Mars Global Surveyor found discovered two craters that held water some time between 1999 and 2001. Vince Carter is so old, even the water on Mars is drying up faster. Alright, no more old jokes.

LOOT ALERT! upload a photo of yourself enjoying our new Pretzel Chicken Fries with #ItsCrunchTime #BKGiveaway for a surprise! rules apply: https://t.co/GAUZgvKam3. pic.twitter.com/AsO2yp9ATk

Burger King introduced the world to their Frankenstein monster mashup of chicken nuggets and French fries in 2005. They’ve become synonymous with other all-time fast food greats like the McRib and the Frosty.

The U.S. Vice President shot Harry Whittington on a quail hunt in Riviera, Texas. Both men understood the event was an accident, but that didn’t stop the world from having some fun with the incident.

Yeah, you know that little symbol you press on your phone so you can play music without a cord? Vince is older than that. Bluetooth first launched in 1999 but it wasn’t until 2000 that companies began incorporating it into their products. It’s also named after an ancient Nordic King. Who knew?

Putin was first elected as president of Russia in 2000, then was re-elected in 2004. Serving as Prime Minister from 2008-2012, he now is president once again. He’s been around long enough, but I wonder if Putin is a Vince Carter fan?

This post was originally published on July 26, 2018, but was updated after he officially announced his retirement.