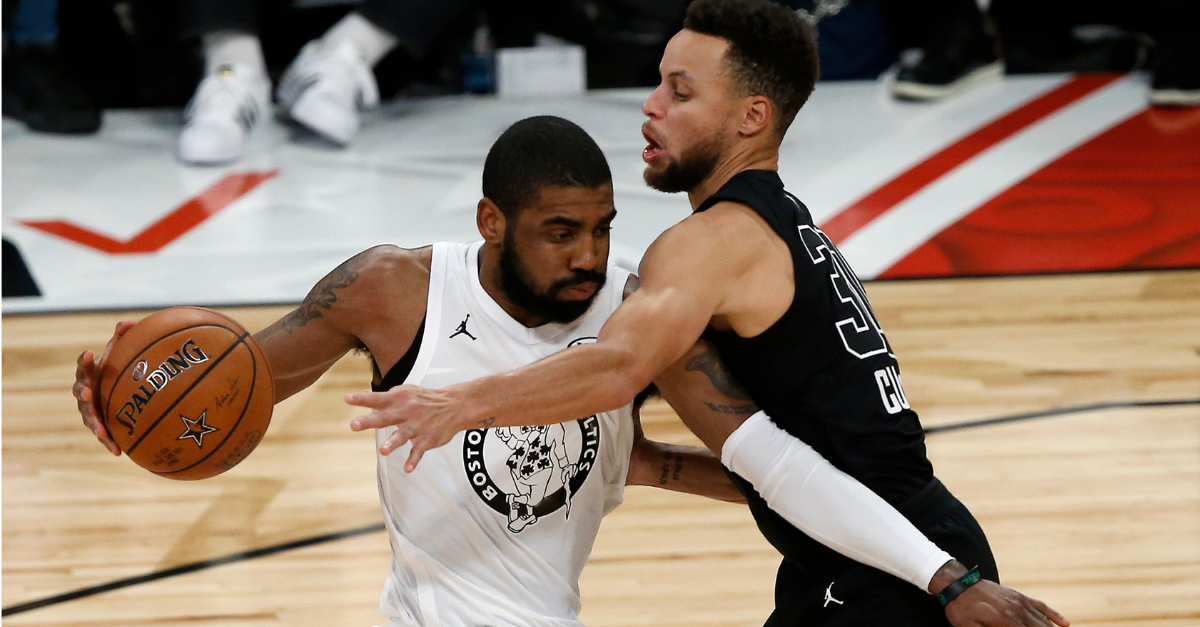 Let’s play a game. It’s one that will likely never exist on an NBA court ever, and it’s something basketball fans could only dream of. Could the Golden State Warriors’ starting five actually beat the 2019 Eastern Conference All-Stars starting lineup? It’s time to find out.

The question was originally raised by ESPN and it has created a life of its own ever since. Some people actually want to debate it. Others feel it is disrespectful to the league. Is it ridiculous to think about? Yes. But here we go.

Who would you take? pic.twitter.com/yvzrOMnDHB

The Warriors, winners of three NBA titles in the last four seasons, have created the ultimate juggernaut and gold standard with the starting lineup of Steph Curry, Klay Thompson, Kevin Durant, Draymond Green, and DeMarcus Cousins.

This game isn’t about who would win a seven-game series. It’s unfair to stack one of the greatest teams ever, who has had their core and chemistry in place for over two years, against a collection of absurd talent that doesn’t play together on a regular basis.

So this is going on a position-by-position basis to see which team has the advantage.

Let’s get this out of the way first: Steph Curry is the better player. You could even argue he’s a much better player if you really wanted to. The way he shoots the basketball is unlike anything the game has ever seen, and he has three rings and two NBA MVP trophies to show for it. He’s just not winning this matchup.

Much like Curry, Kyrie Irving is a special talent. The way he handles the rock and finishes at the rim is unmatched for his position. And the way he has destroyed Curry over the past few years is all the proof you need. Do you remember Game 1 of the 2015 NBA Finals when Kyrie went off on Curry before getting hurt and changing the entire series? How about the Christmas Day buzzer-beating shot? What about the entire 2016 NBA Finals?

There is no hiding in a game like this and no matter how great and amazing Curry is, Irving is the one player in the league that can wreck him off the bounce and shoot over him. There’s no reason to believe it wouldn’t happen again.

This is a very intriguing matchup. On one hand, you have one of the best shooters and two-way players in the league in Thompson. On the other, you have one of the game’s most prolific scorers and underrated stars in Walker. The argument could go in circles here and there is a good case for both players, but Thompson likely deserves the edge here and probably won’t even make to the All-Star Game this season. He’s bigger, longer, and can heat up just as quick.

In most cases, you could just say these two cancel out and move on. This is not most cases. These are two of the best players in the league and it’s not even close. KD’s scoring prowess is outrageous and Leonard’s all-around game is downright nasty. These two would go at each other in a big-time way, as seen in the past, and it’s hard to predict who would get the upper hand. In today’s NBA, however, better offense trumps good defense.

Oh, man. Now this is getting good. The NBA’s Bad Boy meets the Greek Freak in an all-time showdown for supremacy. Antetokounmpo obviously has a massive size advantage and is a legitimate MVP candidate this season. For as easy as it would be to dissect this matchup more, let’s not kid ourselves: Nobody is really going to check Giannis, the team’s captain, for a full game right now. Not even an elite defender like Green.

It all comes down to this. Would you have it any other way? Anyone who says no is completely lying. A little over a year ago, there is no debate here. Boogie Cousins has been a premier big man in the league for a number of years and the fact he is now on the Warriors is insane. However, Embiid is a walking double-double right now and has emerged as one of the game’s top players. Plus, Cousins is coming off of an injury and there is just no way he is slowing him down in less than a month.

So there you have it. For as good as the Warriors are, the Eastern Conference All-Stars are winning. The debate is over.