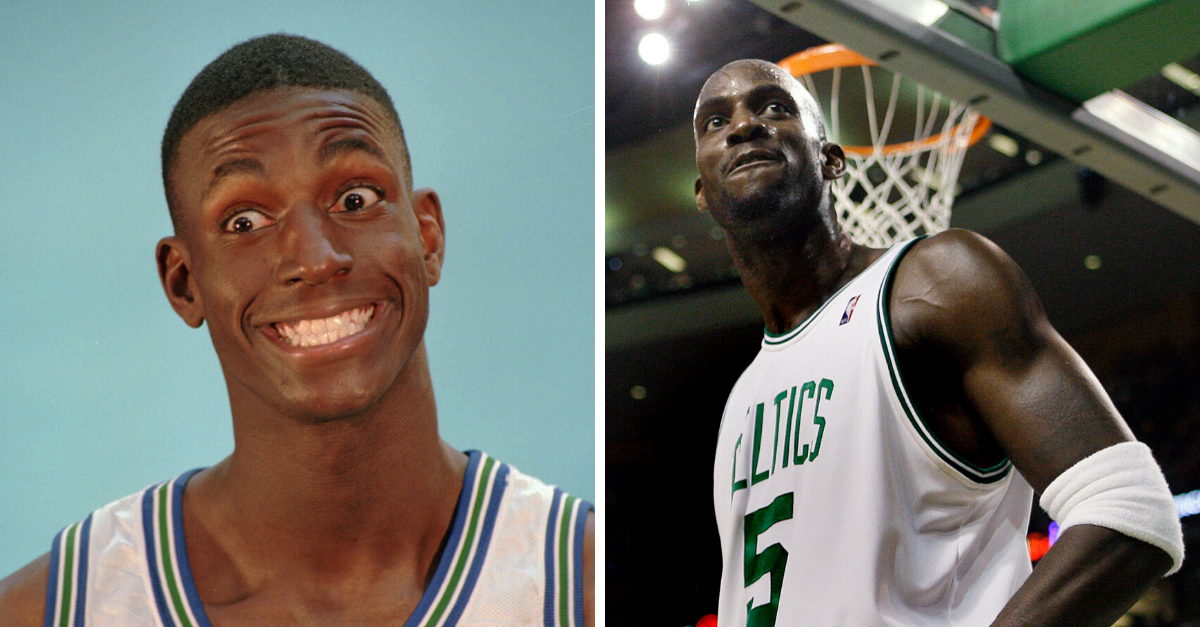 Was there anyone more fear-inducing in the paint than Kevin Garnett? KG swallowed shots and hawked a menacing stare, daring shooters to challenge him. If you took the bait, panic rushes through and you realize the giant mistake you made. Then your shot ends up as a set for a spike. Afterward, you can expect a quiet response or a “Nice try, buddy” reminiscent of Andrew Luck oofing while getting pummeled for the 50th time.

KG wouldn’t allow a second to collect your thoughts. He’d be barking left and right, toying with you.

And that’s why we love Kevin Garnett ? He was a presence. He was fun. He was intense.

The Big Ticket grew into this beast from a young high school draftee, becoming the first prep player to be drafted in the modern era.

Garnett didn’t play organized basketball until he arrived at Mauldin High School in Mauldin, South Carolina. The game became easier for him over time, especially on the defensive end where he had a nose for blocking shots. After three years at Mauldin High, Garnett transferred to Farragut Academy in Chicago due to a racially charged incident between students.

Garnett blossomed into one of the best high school basketball players in the country at Farragut alongside Ronnie Fields. His stats jump off the page. Garnett averaged 25.2 points, 17.9 rebounds, 6.7 assists, and 6.5 blocks on 66.8 percent shooting from the field, en route to a 28-2 record. He was named National High School Player of the Year by USA Today and Illinois Mr. Basketball while earning an invitation to the McDonald’s All-American Game. The power forward recorded 18 points, 11 rebounds, 4 assists, 3 blocks, and was dubbed the game’s Most Outstanding Player.

In the midst of his senior year, Garnett debated between playing college basketball and turning pro. He tested the waters with several NBA teams including the Los Angeles Clippers, Philadelphia 76ers, Portland Trail Blazers, Denver Nuggets, Toronto Raptors, and Vancouver Grizzlies. He decided to enter the 1995 NBA Draft and was selected fifth overall by the Minnesota Timberwolves, becoming the first player drafted out of high school since 1975.

Garnett considered North Carolina, Michigan, Georgia Tech, and Maryland among other scholarship offers. He stated he would’ve attended the University of Maryland had he played NCAA basketball.

KG enjoyed individual success with the Timberwolves, culminating in the 2004 MVP.  However, they only made it past the first round of the playoffs once. He was traded to the Boston Celtics in the summer of 2007 and formed the original big three with Paul Pierce and Ray Allen. The Celts battled through the 2008 playoffs, defeating the Atlanta Hawks, Cleveland Cavaliers, and Detroit Pistons to claim the East Crown. They reignited an old rivalry with the Los Angeles Lakers in the NBA Finals, winning in six games. The NBA player had a short stint with the Brooklyn Nets before finishing his 21-year-career back in Minnesota in 2016.

Using draft picks on high school players is a dangerous game for an NBA general manager. Young talent can have a hard time adjusting to the advanced professional game. Garnett, on the other hand, proved that high school players are worth taking a shot on given the right circumstances. His breakthrough paved the way for Kobe Bryant, Tracy McGrady, LeBron James, and Dwight Howard. The league hasn’t allowed players to be drafted straight out of high school since 2005, but that looks to be changing by 2022.

Look out for Emoni Bates.

One ring, A Defensive Player of the Year, an MVP, 15 NBA All-Star appearances, an All-Star Game MVP, an NBA All-Rookie Second Team, four All-NBA First Teams, and four rebounding titles later, The Big Ticket started in the halls of high school, became one of the greats in NBA history, and is now a Hall of Famer.

MORE: “Skip To My Lou” Went From Streetball Legend to NBA Starter