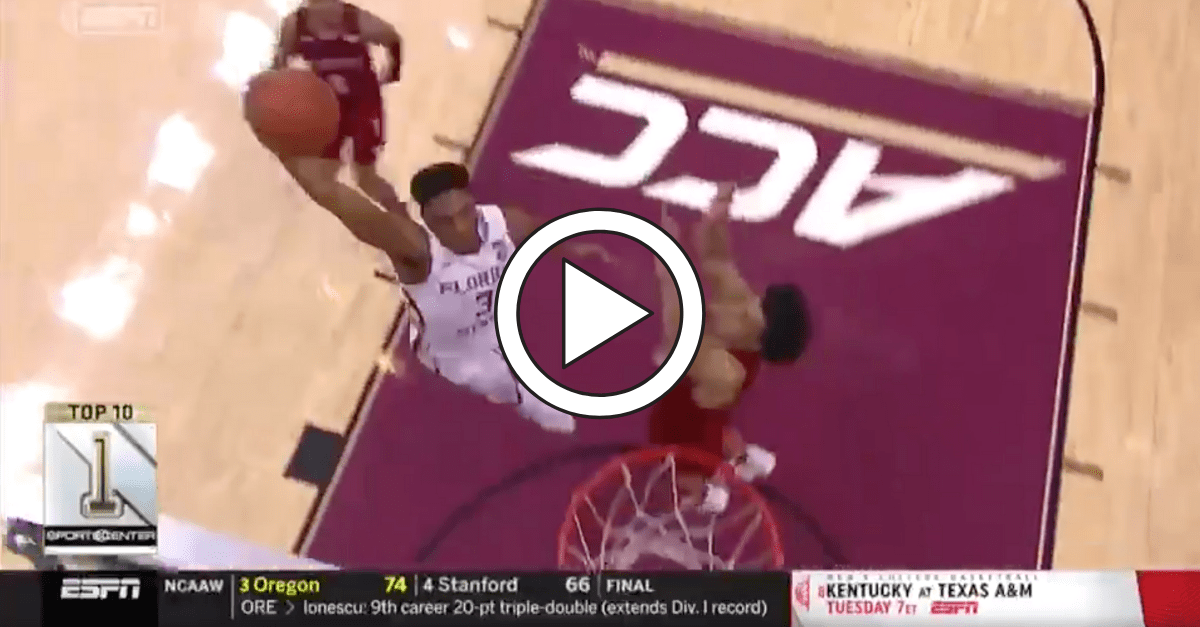 TALLAHASSEE, Fla. (AP) ? Florida State’s home dominance looked shaky as it trailed Louisville by 10 points in the second half.

The Seminoles quickly regrouped and mounted a surge to defend their floor and move atop the Atlantic Coast Conference ? for now.

Trent Forrest scored 14 of his 16 points after halftime, and No. 6 Florida State rallied from the double-digit deficit to beat No. 11 Louisville 82-67 on Monday night.

The Seminoles (24-4, 14-3) moved past the Cardinals into first place in the ACC. They lead Louisville and No. 7 Duke by a half-game in pursuit of their first ACC regular-season championship.

Three games remain, but this victory spoke volumes about FSU’s desire to make it happen.

“We’re here and here to stay,? Forrest said. ?We’ve been on the up-and-up basically since my freshman year. We’ve been going out each night and trying to get the respect that we deserve. We just have to keep building on it.?

Was there any doubt what was the Sportscenter #1️⃣ play @TForrest_11 pic.twitter.com/hKFcaIAaJ9

Patrick Williams’ thunderous dunk put an exclamation point to a 15-0 run that put the Seminoles ahead for good. Florida State outscored Louisville 50-27 in the second half and extended its home winning streak to 22 games.

The Seminoles’ second-half run came with starters on the bench. Reserve guards Anthony Polite (eight points) and RayQuan Evans (four) were productive offensively and sparked the rally with stifling defense.

?We have been winning games all year with the quality of our depth and our ability to play good defense for long periods of time,? Florida State coach Leonard Hamilton said.

Ryan McMahon scored 14 points and Jordan Nwora had 13 points and eight rebounds for Louisville (23-6, 14-4), which went more than nine minutes without a field goal during one second-half stretch.

?We battled,? Louisville coach Chris Mack said. ?I thought their pressure, although it might not have turned us over, kept us on our heels. We handled it for the first 20 minutes. Just didn’t keep up the pace in the second half.?

The Cardinals played short-handed most of the night after junior center Malik Williams injured his left foot minutes into the game. He returned to the bench with a boot on the foot. Mack said Williams has a twisted ankle and didn’t know when he’d return.

Florida State has won 24 games in consecutive seasons for the first time in school history. The Seminoles were 29-8 last season.

Louisville: The Cardinals shot well in the first half, making 52% before cooling off to 32% in the second.

Florida State: The Seminoles shot 50% in each half and overcame nine first-half turnovers to complete a season sweep of Louisville.