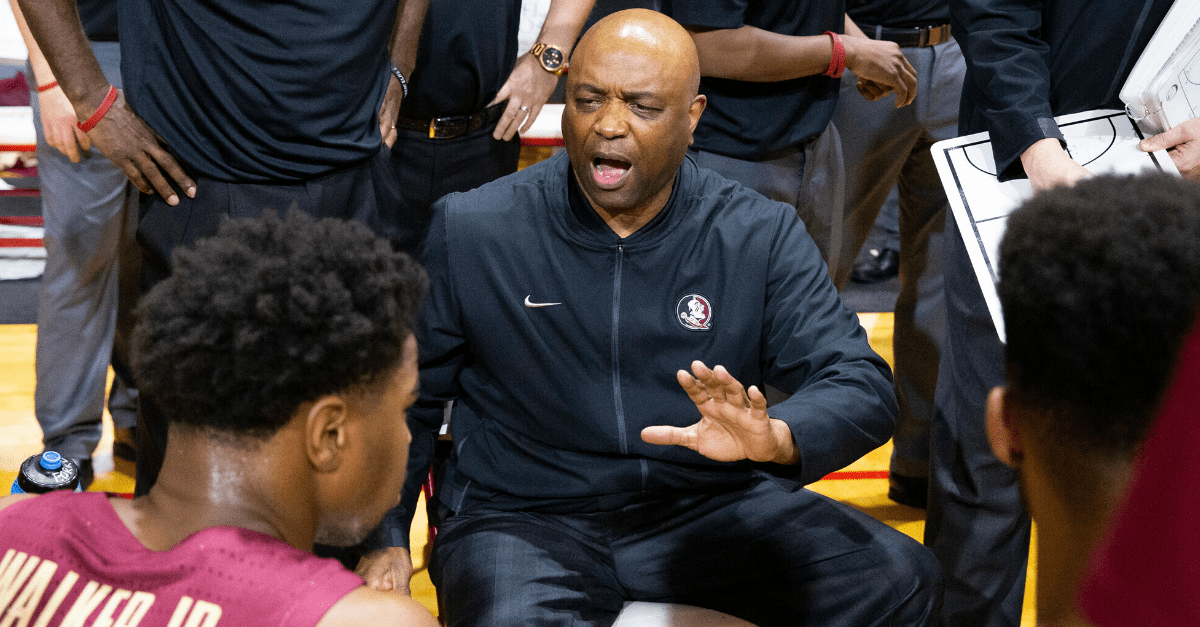 The best college basketball coaches are the ones we see on the sidelines every March. Duke’s Mike Krzyzewski and Kentucky’s John Calipari are no-brainers on that list. Villanova’s Jay Wright and Virginia’s Tony Bennett have made their cases as well in men’s basketball. On the women’s college basketball side, UConn’s Geno Auriemma and Tennessee legend Pat Summitt dominated like nobody else.

It should be no surprise, then, that these coaches have been recognized by winning multiple Naismith College Coach of the Year Awards. They’ve won national championships, sent players to the NBA and WNBA and transformed their respective schools into powerhouses.

As far as men’s hoops goes this season, plenty of coaches are worthy of consideration.

One of the top contenders for this year’s award is Florida State head coach Leonard Hamilton. Florida State basketball might not have accomplished what it did without Hamilton.

UPDATE (March 19, 2020): Hamilton was named one of four finalists for the National Coach of the Year Award after leading the Seminoles to an ACC regular season championship and an ACC Tournament Championship despite not playing a game in it.

Hamilton won ACC Coach of the Year for the third time in his Florida State career. The other three candidates up for the award include Baylor’s Scott Drew, San Diego State’s Brian Dutcher and Dayton’s Anthony Grant.

Since taking over the program in 2002, he’s led the Seminoles to two ACC Tournament Championships (2012, 2020) and seven NCAA Tournaments. FSU impressed in 2020, boasting a 26-5 overall record and a 16-4 conference record in the regular season while finishing at No. 4 in the NCAA rankings. They went 16-0 at home.

The Seminoles looked entirely poised for another deep run in the NCAA Tournament and potentially their first national title in program history under Hamilton’s watch before March Madness was canceled over coronavirus concerns.

What Is The Naismith Coach of the Year?

FANS: The late season watchlist for the @wernerladderco Men’s College Coach of the Year is HERE!

The Werner Ladder Naismith Coach of the Year Award was named after James Naismith, who invented the game of basketball, and has been awarded each season since 1987. It’s given to the nation’s top NCAA Division I head basketball coach each year by the Atlanta Tipoff Club.

Every finalist and winner is selected by the Atlanta Tipoff Club’s national voting academy, which is made up of former head coaches, former award winners, conference commissioners and journalists across the U.S. They each base their vote off what they deem is the most outstanding coaching performance during that year’s college basketball season.

The Coach of the Year Award isn’t the only Naismith Award handed out by the Atlanta Tipoff Club. The organization’s Naismith Awards are given to a a variety of college and high school players as well.

Last year’s finalists for the men’s side were Tennessee’s Rick Barnes, Virginia’s Tony Bennett, Houston’s Kelvin Sampson and Texas Tech’s Chris Beard. Barnes won the award after leading the Volunteers to the Sweet 16 in 2019.

?Rick Barnes has built an incredible program at Tennessee, and his coaching performance this season was worthy of the top award in college basketball, the Werner Ladder Naismith Trophy Men?s Coach of the Year,? Atlanta Tipoff Club executive director Eric Oberman said at last year’s Naismith Awards Brunch at the Final Four in Minneapolis. ?We are honored to recognize Rick as the newest member of the Naismith Awards family.?

Naismith Coach of the Year Finalists 2020

There’s a lot of basketball left this season. Let’s not celebrate just yet. https://t.co/yikgPiUqap

This season’s Coach of the Year semifinalist watch list included 15 coaches from eight different conferences. The Big Ten led the way with three coaches, while the Big 12 claimed two coaches. The ACC had two has well — FSU’s Leonard Hamilton and Lousiville’s Chris Mack. The SEC boasted just Auburn’s Bruce Pearl, who led the Tigers to a Final Four last season.

The only name on this year’s semifinalist watch list to have won the award in the past was Mark Few, who took Gonzaga to the NCAA National Championship Game in 2017. That means 2020 will see a first-time winner.

Four coaches are left in the running for the award. As of now, any coach looks like a worthy recipient. The winner of the 2020 Werner Ladder Naismith Trophy for Men’s College Coach of the Year will be announced on April 3. Fans can vote at naismithfanvote.com until April 1, but the fan vote only counts for 5 percent of the final vote.

This post was originally published on February 21, 2020. It will be updated following more award news.