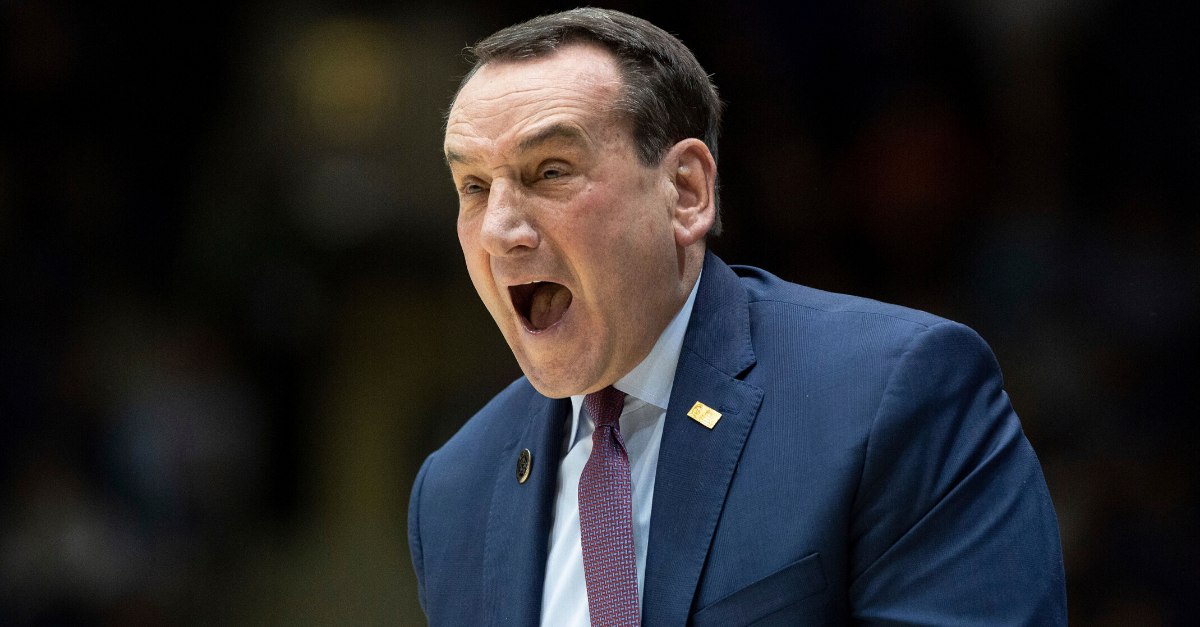 Once you’ve joined Coach K’s circle, you’re a part of it for life. He defended Grayson Allen when he tripped players repeatedly, and he sends a hand-written letter to every current and former player for their birthdays.

It should surprise no one, then, whose side Coach K took when Duke’s student section began yelling at one of his former players, Pittsburgh Panthers coach Jeff Capel, during the Duke Blue Devils’ game against the Panthers Tuesday night at Cameron Indoor Stadium in Durham, North Carolina.

Coach K was caught yelling “shut up” repeatedly to the Cameron Crazies, Duke’s rowdy bunch of students, after the group chanted “Jeff Capel sit with us.” The 72-year-old Duke coach took issue with the chant and after the first half let the student section know it.

After Cameron Crazies started yelling "Jeff Capel, sit with us," Coach K could be seen yelling "Shut up" and "He's one of us."

Capel played at Duke and coached there for 7 seasons. pic.twitter.com/OdKeJ62MMv

“I don’t know if I made a mistake on that but I’ve never heard another coach’s name yelled out in the middle of the first half when we’re in a war with the team,” he began during his postgame press conference.

Coach K apologizes to students for outburst, but not for defending “his guy” pic.twitter.com/JaJjRjiq33

Coach K walked back his actions a bit upon realizing that the Duke student section wasn’t attacking the Pitt coach personally, but he stood firm on Duke fans leaving the former Duke player and coach alone.

“Wow. I don’t know, we got a different look at what the hell’s going on on the game. I thought it was something personal, because … I apologize to the students for that. I don’t apologize for the timing, you shouldn’t say that in the middle of the first half in an ACC game. This isn’t some cutesy little thing where we can just bounce a ball around and giggle, we gotta fight. We gotta have people who are adamant about it.

“Once I heard his name, I’m not going to go say ‘will you please tell me exactly what you’re doing?’ So it’s a mistake on my part. But I’d rather make the mistake in protection of my guy… So I apologize, but let’s think of a different cheer… Leave the other guy alone,” he said in his press conference via USA Today.

Capel played guard under Coach K from 1993-97. He served as a Duke assistant coach and associate head coach from 2011-18 before Pitt hired him as its head coach in ’18.

I don’t think anyone is in the wrong here. The student section’s Jeff Capel chant was good-natured and didn’t attack him in any way. Coach K lashed out at halftime to protect his guy, not realizing exactly what the Cameron Crazies were yelling.

The front few rows of that section were shook, though.

When your parents yell at you but you did nothing wrong. pic.twitter.com/mP2cQax4qM

I can’t say I’ve ever seen Coach K or a coach of his stature do something like this in a basketball game.

READ MORE: Who Are The Highest-Paid Coaches in American Sports?