Zion Williamson Rookie Cards Are Now Worth Over $100,000 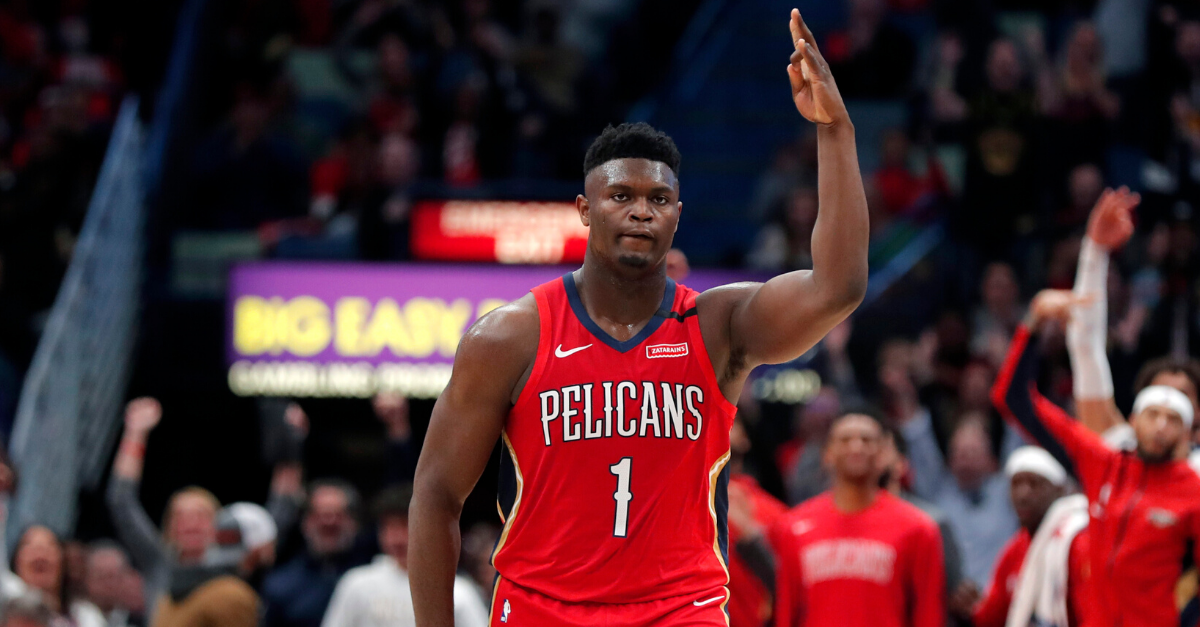 Zion Williamson was arguably the most-hyped college basketball player ever while playing for the Duke Blue Devils. The consensus 2019 National College Player of the Year and First-Team All-American captivated the sports world with jaw-dropping dunks and his insane physical attributes.

Every team in NBA wished it had the 6-foot-6, 285-pound forward, but the New Orleans Pelicans won the lottery and selected Williamson first overall in the 2019 NBA Draft in a no-brainer decision. Beyond his hooping abilities, Williamson is a marketing gold mine. The team sold 12,000 season tickets this season and all of those fans witnessed the rookie’s thrilling, 22-point debut against the San Antonio Spurs.

And it was absolutely electric.

Everyone wants a piece of Zion Williamson. ESPN knows this, so it dedicated an entire camera to the Pelicans rookie during his debut. The 19-year-old’s $75 million shoe deal with Jordan Brand allows kids all over the world to look like Zion. This is the Zion Effect.

HERE IT IS!! The @Zionwilliamson @PaniniAmerica Prizms Black 1/1 Rookie Card! It was pulled by a local customer of ours 🔥 🔥 #holygrail #whodoyoucollect #panini #dacw pic.twitter.com/8ObxrrzOY7

It’s no wonder NBA fans and collectors are trying to get their hands on a coveted Zion Williamson rookie card. These prized pieces of plastic are selling for thousands of dollars, and one lucky collector even nabbed one worth $100,000.

The customer, who is unknown, pulled the rare Zion Williamson card from a pack at Dave & Adam’s Card World in Williamsville, New York, the store shared on Twitter. According to Fox Business, it’s worth north of $100,000.

The card is a Zion Williamson “Panini Prizm Black” rookie card from Panini America, a trading cards, memorabilia and collectibles company. Only one of these specific basketball cards were made, as it reads “1-of-1” on the back of the card.

“He was thrilled with his good fortune. We couldn’t be happier for him,” the store CEO Adam Martin told WIVB-TV.

Williamson has an exclusive trading card agreement with Panini America. It released his first card in Panini America’s 2019 Contenders Draft Picks Basketball in September as part of a number of his own sports cards worth a pretty penny.

Which Zion Rookie Cards Are Most Valuable?

Pulling a 1/1 SIGNED Zion Williamson and R.J. Barrett Rookie Card from a pack of basketball cards is definitely a “Pinned Tweet” worthy moment! Had to show it one more time y’all just to pin it! Thanks so much for all the AWESOME comments and congrats! #Zion pic.twitter.com/Nl6dGddfAt

Beckett put together a Zion Williamson rookie card guide for those not knowledgable in the trading card world, and it had high praise for this specific card over the Panini Contenders or Panini Instant Draft Night variations: “Of the Zion Williamson Rookie Cards available to the masses ? widely available at retail and hobby with a variety of entry points ? 2019-20 Panini Prizm is the big one.”

One search on Ebay reveals some of the hefty price tags attached to Williamson’s rookie cards, including this Zion Williamson Prizm for $2,500. One Twitter user explained why he paid $1,300 for a rookie card. The rarity is determined by how many copies of the card were made.

In October, a lucky collector named Jimmy Mahan pulled a one-of-one Zion Williamson/R.J. Barrett rookie card worth $15,000. He shared the video of him unwrapping the treasure like a kid on Christmas Day.

Martin said he?s seen similar cards to the ultra rare on pulled in his store, including one Williamson card valued at $45,000 and another at $25,000.

Zion’s rookie card might not stack up to the LeBron James rookie card worth $325,000 or baseball’s $1.2 million Honus Wagner rookie card. Give Zion’s career time and who knows how much one of these cards will fetch?