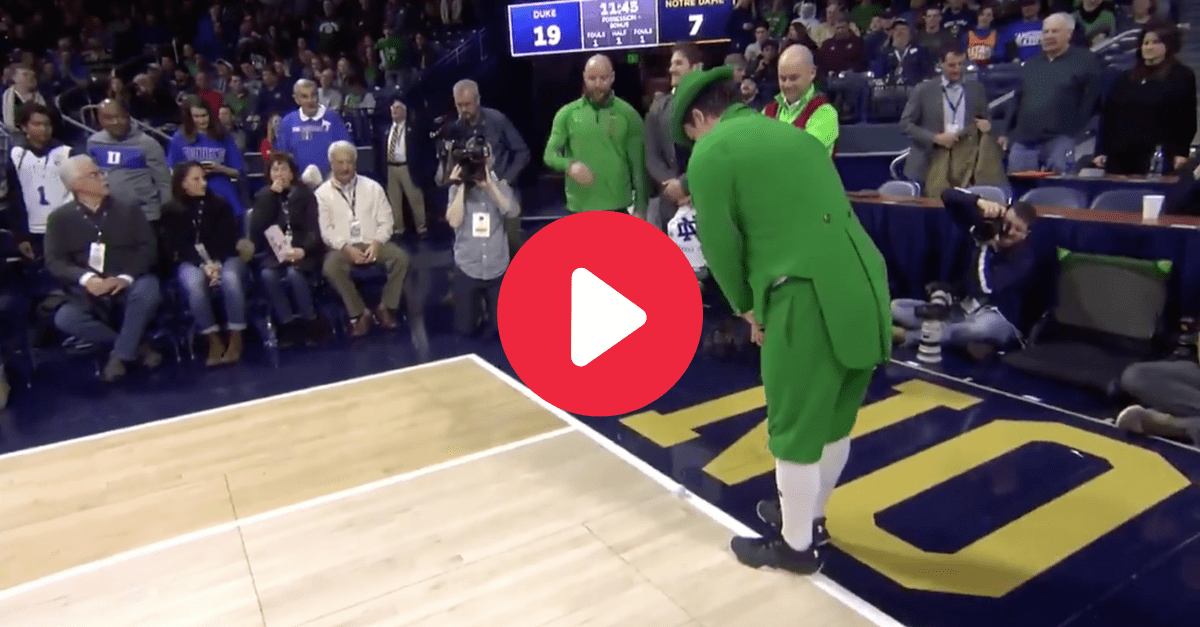 If anyone tuned into the Duke and Notre Dame college basketball game last January, chances are you got a little tired of seeing the Blue Devils star freshmen completely dominate the Fighting Irish at some point on ESPN. However, early on during the 83-61 rout, every fan inside the Joyce Center in went bonkers over something that had absolutely nothing to do with the game.

At the under-12 timeout in the first half, South Bend, Indiana was a place of pure pandemonium. After two fans made 94-foot putts, the famous Notre Dame Leprechaun had a chance to make everyone?s night. All the mascot had to do was sink a full-court putt of his own.

At first, the NCAA mascot wanted the crowd pumped up to cheer him on. Then, in rather hilarious fashion, the arena got as quiet as a golf course as he lined up the putt.

From the baseline, the Notre Dame Leprechaun hit the putt pure and watched it quickly across the hardwood to the far baseline.

What happens next is legendary.

… and the crowd goes WILD!

After ✌️ fans made 94-foot putts, @NDTheLeprechaun sunk an #SCTop10 3rd in a row to win every fan @USGA U.S. Senior Open practice round tickets when Notre Dame hosts the event this summer.#GoIrish pic.twitter.com/NCoZe80V87

After drilling the putt into a yellow box, which is obviously much bigger than a golf course, the crowd definitely went wild and The Leprechaun channeled his inner-Tiger Woods with a glorious fist pump.

So why was everyone excited?

First and foremost, a good timeout promotion can be fun and watching three people sink full-court putts would put a smile on the faces of even the angriest of fans who were upset the Irish were already trailing 19-7 early in the game.

Most importantly, since the mascot made it, every fan inside the Joyce Athletic Center won free tickets to the United States Golf Association (USGA) U.S. Senior Open practice round this summer.

The 40th U.S. Senior Open was at the Warren Golf Course at Notre Dame.

Sure, these weren’t tickets to an NFL, NBA, NHL, MLB games or the Master’s, but free is free.

It?s safe to say Fighting Irish fans will want to forget the Duke game, but you better believe they remembered the time their mascot helped score them some practice round tickets at a cool golf event.

This was team golf at its finest. You might want to change your golf putter grip to green to see if it brings you look, too.

MORE: The 10 Most Bizarre Mascots in College Sports