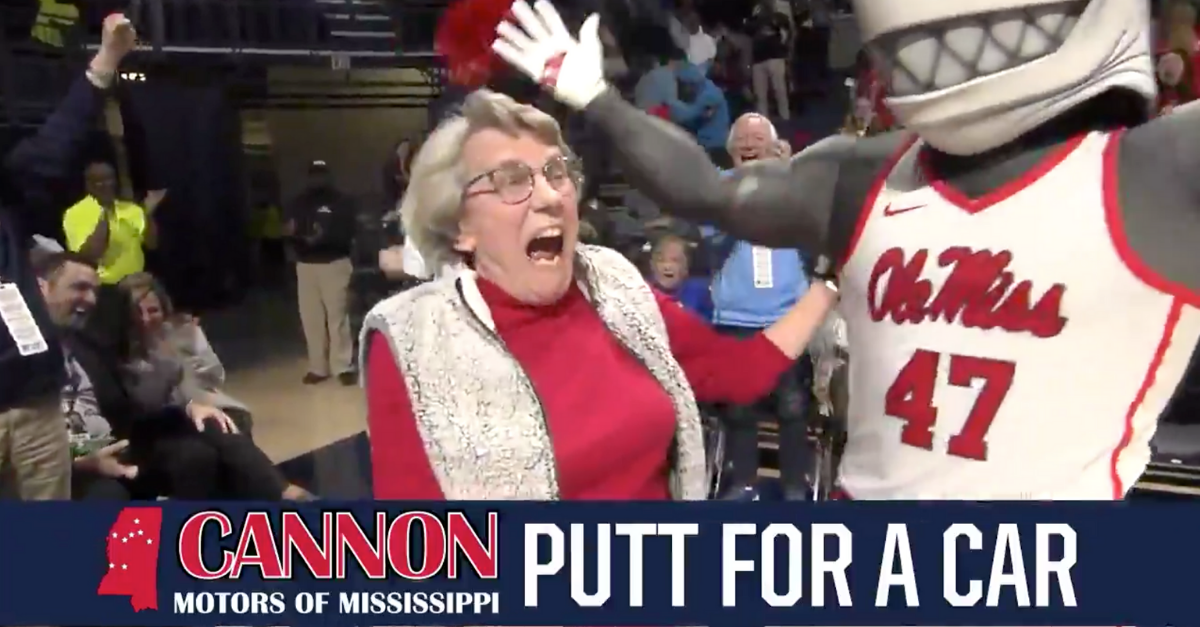 Forget bingo, knitting and baking cookies. There’s a grandma sweeping the world off its feet and she’s coming for Tiger Woods‘ and Jack Nicklaus’ legacies.

Just when you think the sport of golf couldn’t get any crazier than Bill Murray slamming tequila shots on the fairway or flashers distracting the pros at the Waste Management Open, an 86-year-old grandma sinks a putt longer in feet than she has lived years at a college basketball game.

Wakefield took to the court for a putt-for-a-car challenge at The Pavilion at Ole Miss Saturday night at the Alabama-Ole Miss men’s basketball game. All she had to do was sink a putt the full length of the floor, a measly 94 feet from where she, her putter and the ball stood in Oxford, Mississippi.

“I just lined up my putter, closed my eyes and said ‘Lord, it’s up to you,’ and I hit it,” Wakefield told AL.com.

Boy, did she ever.

As the balled rolled past the half-court line shortly after halftime, the announcer took notice of its path.

The ball disappeared into the promotional sign, and just like that Mary Ann Wakefield became the proud owner of a $25,000 new Nissan Altima from Cannon Motors. Even Tony the Landshark, the Rebels mascot, could barely contain his excitement.

Mary Ann walked into The Pavilion tonight for @OleMissMBB. She walks out with a NEW CAR thanks to our friends at @CannonMotors! pic.twitter.com/iZqgA5g73a

The 86-year-old grandmother and Ole Miss fan said she was the only fan to sign up for the promotion, a wonder considering the amount of University of Mississippi students in attendance at the Ole Miss basketball game.

She also told AL.com she’d picked up a club or two in her past. She began playing the game after retiring from a career in TV 30 years ago. Still, she wasn’t sure how she sunk the biggest putt of her life.

“But my long game was better than my short game,” she said. “I could drive a long ball, but my short game always killed me.”

Wakefield set the Internet on fire. The tweet from Ole Miss Athletics (@OleMissSports) racked up thousands of retweets and tens of thousands of likes.

That moment when you realize you’ve won a new car pic.twitter.com/HYGIvo6hmY

“My daughter says it has more than a million Twitters,” she told AL.com. ?I?m about ready to lie down and take a nap,? she laughs. ?I?m still shaking.?

Call her Nappy Gilmore, Tiger (Baked) Goods or simply Mary Ann Wakefield. The Rebels may have lost by 25 at home to the Crimson Tide, but this grandma rode off in a slick new ride.