Bob and Bill. Magic and Kareem. Michael and Scottie. Shaq and Kobe. LeBron and Dwyane.

You can track the National Basketball Association's history through the dynamic duos that define decades. Only five people touch the floor at any given time, so finding chemistry between star players is the difference between good teams and great ones. There are dozens of notable tandems throughout the years, but none left fans wanting more than watching Anfernee "Penny" Hardaway run the floor with Shaquille O'Neal in the 1990s.

And frankly, if you'll pardon the pun, NBA historians are short-changing Penny's role as one of the great one-two punches of the 1990s NBA. 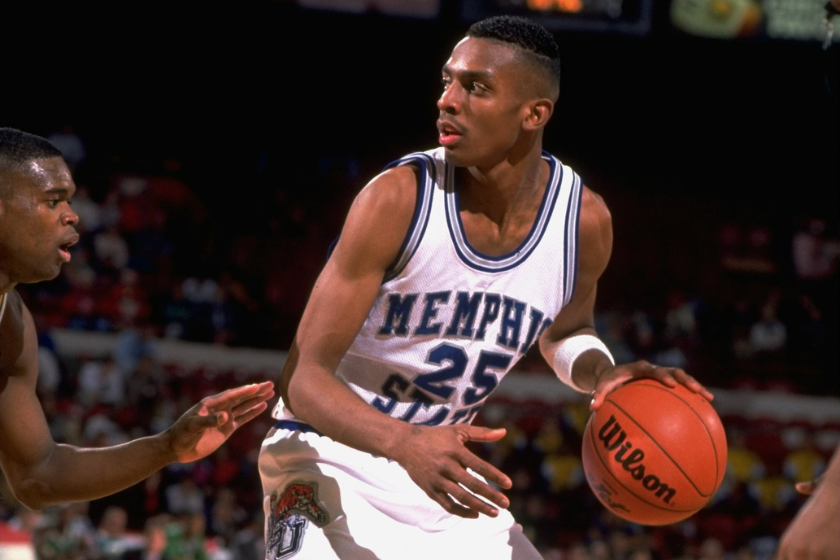 Born July 18, 1971, Hardaway didn't have much growing up. His mother Fae was only 19 when she gave birth, and after she graduated high school and pursued a better life, Anfernee remained in Memphis to be raised by his grandmother, Louise.

"His nickname, Penny? That came from Mama," Fae told Sports Illustrated back in 1991. "She called him Pretty, but in the country, that comes out 'Pweddy.' People just took it from there."

To avoid trouble, Hardaway spent hours on the blacktop honing his basketball skills. The sport came naturally to Penny, as his grandmother said that Hardaway's hands were so big when he was born, "it looked like he was wearing gloves."

That work paid off.

Penny Hardaway was a 2x Great Midwest Player of the Year, Consensus All-American, and his #25 was retired by the University. Penny finished his career scoring 1,319 points in 2 years and scoring the second most points in a season, behind Dajuan Wagner (2002).#AllForMemphis pic.twitter.com/iOATNxjJsB

"Penny" Hardaway blossomed into one of the top high school basketball players in the country. Playing at Treadwell High School in Memphis, Tennessee, Hardaway was named Parade Magazine's National High School Player of the Year when he averaged 36.1 points, 10.1 rebounds, 6.2 assists, 3.9 steals and 2.8 blocks per game as a senior in 1989.

Hardaway scored 1,289 points that year (third-most in a season in state history) and his 3,039 points rank 19th all-time, according to the TSSAA record book.

At Memphis State, Penny blossomed into a Naismith College Player of the Year and John Wooden Award finalist as the nation's top player. The Consensus All-American later had his No. 25 retired by the school. (It wasn't the last time he'd be a Tiger.)

Hardaway entered the 1993 NBA Draft after his junior season, where teams thought he'd go in the top 10, but not first-overall. Michigan's Chris Webber was the top prospect in that year's draft, and anyone who didn't take Webber with the No. 1 pick, would be laughed out of the league. That team was the Orlando Magic.

Shaq was against the Magic drafting Webber simply for the reason that they played similar positions with a similar style. With that guidance in mind, the Magic looked for a suitor willing to deal draft picks for Webber, but also was within range of the top 5 picks in the draft. Shaq had worked with Penny on the movie "Blue Chips", and they grew close. After a secondary workout with the Magic, the Orlando basketball front office was sold. They'd pick Webber and trade him to whoever snagged Penny.

Penny was originally selected by the Golden State Warriors, and then immediately traded to the Orlando Magic traded with three first-round picks in exchange for the rights to No. 1 overall pick Webber. 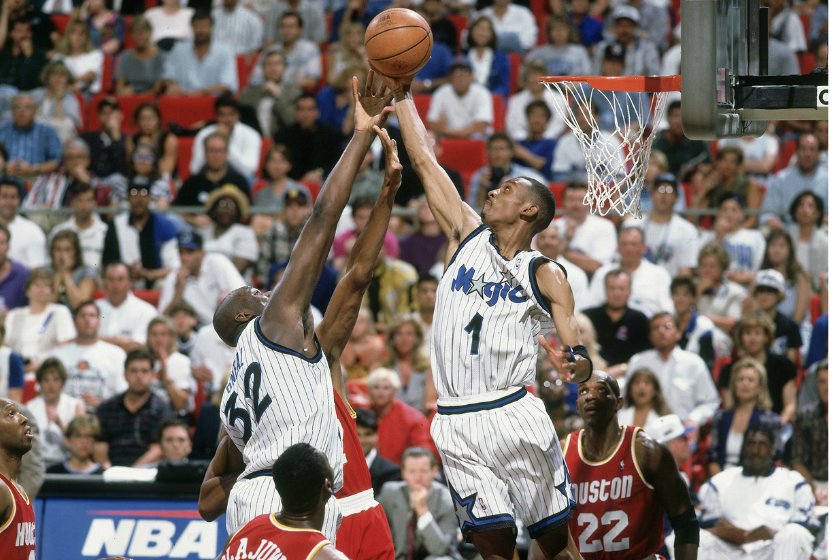 When Shaq and Penny joined forces with the Orlando Magic, sparks flew. After learning to play an as NBA point guard, Hardaway started all 82 games his first season, averaging 16.0 points, 6.6 assists, 5.4 rebounds, and 2.3 steals on his way to NBA All-Rookie First Team honors -- Since 1946, only three players reached those averages their first season; Magic Johnson, Chris Paul, and Penny Hardaway.

The next year, Hardaway made his first NBA All-Star selection alongside O'Neal. The Magic won 57 games with the league's top-ranked scoring offense as they defeated the Chicago Bulls and freshly-unretired Michael Jordan in the second round of the NBA Playoffs. Orlando advanced to the franchise's first-ever NBA Finals, but were swept by the Houston Rockets.

Hardaway averaged 25.5 points per game and 8.0 assists in that series.

With Shaq battling injuries and missing 28 games the following year, Hardaway averaged a career-high 21.7 points per game on 51 percent shooting to go along with 7.1 assists. He finished third in the MVP voting and was named All-NBA for the second time. Orlando won 60 games, but they lost in the Eastern Conference Finals to a Chicago Bulls team that won a record 72 regular season games.

The next offseason, before teaming up one final time to win a gold medal in the 1996 Olympics, Shaquille O'Neal signed a $121 million contract with the Los Angeles Lakers. The "Penny and Shaq" tandem was officially over.

Penny carried the Magic as best he could, earning his third-straight All-Star Game appearance his first year without O'Neal. But in the 1997-98 season, a devastating knee injury changed everything. Hardaway played in just 19 games and made his fourth and final All-Star appearance. His explosiveness never fully returned.

Hardaway was traded to the Phoenix Suns in 1999, but the backcourt pairing of Hardaway and Jason Kidd didn't produce championship results. Hardaway battled injuries and conflicting styles the rest of his career, playing for the Suns until he and Stephon Marbury were traded to the New York Knicks in order for Phoenix to sign future two-time MVP Steve Nash to a monster deal.

Hardaway only started four games in two-plus years with the Knicks before retiring after the 2005-06 campaign. He returned after a one-year hiatus to play for the Miami Heat in 2007, reuniting him with Shaquille O'Neal one last time. 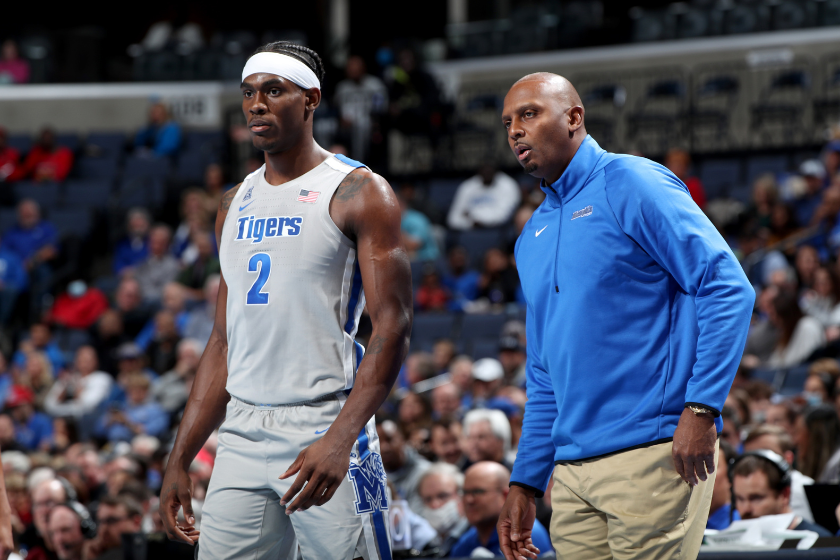 Hardaway returned home to Memphis after his NBA career to coach at Lester Middle School and Memphis East High School. In 2018, Hardaway replaced Tubby Smith as head coach of the University of Memphis Tigers, taking over his alma mater to build a contending college basketball program.

In his first two seasons, Hardaway's Tigers won 22 and 21 games, respectively, reaching as high as No. 9 in the AP Poll before the 2019-20 season was cut short due to coronavirus. Coach Hardaway signed four-star recruits Antwaan James and Tyler Harris, as well as his son Jayden Hardaway, to the 30th-ranked recruiting class of 2018.

The next year, No. 1 overall prospect James Wiseman joined the Memphis basketball team alongside fellow five-star Precious Achiuwa. Four-stars Boogie Ellis, DJ Jeffries, Lester Quinones, Malcolm Dandridge and Damion Baugh rounded out the top-ranked recruiting class in America. Wiseman would go on to be drafted second-overall by the Golden State Warriors in the 2020 NBA Draft.

Had Anfernee "Penny" Hardaway stayed healthy, and the Orlando Magic realized how great he and Shaquille O'Neal could've been together, we might be talking about maybe the greatest point guard-center combo of the modern era. Their relationship and three-year run was chronicled in the ESPN 30 for 30 films' "This Magic Moment."