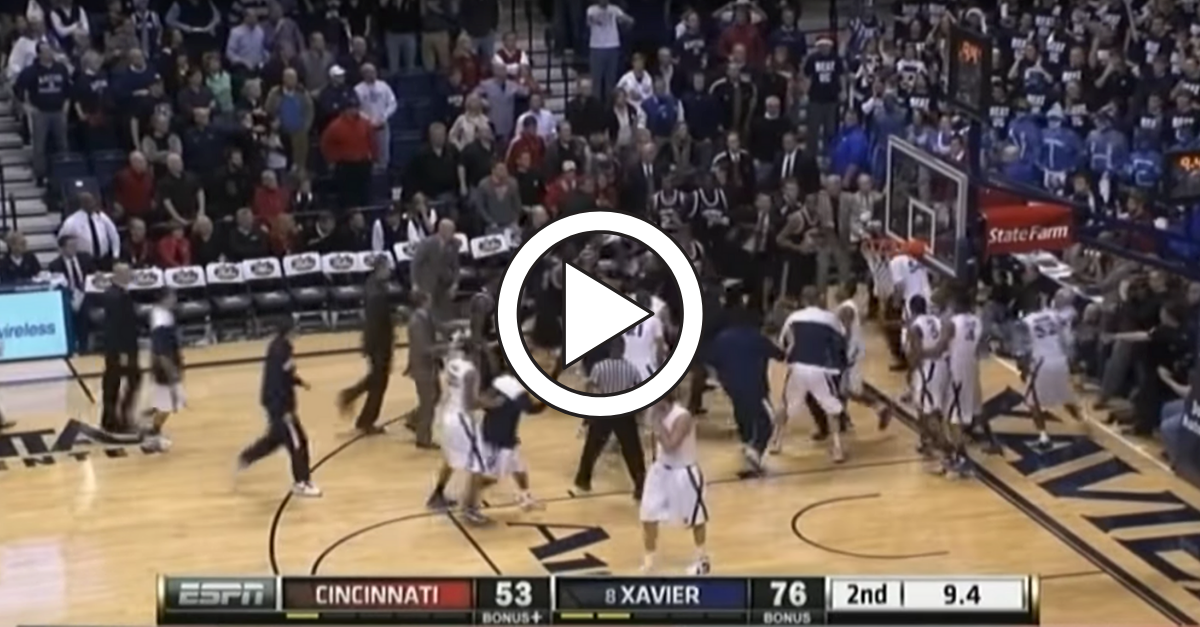 NCAA basketball rivalries are a different breed. The games are more than basketball. It’s about pride, rule over the region, tradition, and the legacy players leave behind.

This mixture of emotion and history can lead to heated meetings, just as it did on December 11, 2011 at the Cintas Center in the CrossTown Shootout between the University of Cincinnati Bearcats and the Xavier Musketeers.

What is the Crosstown Shootout?

Win a pair of tickets to the SOLD OUT Skyline Chili Crosstown Shootout!

Simply RT & follow us by 5pm tomorrow for your chance to win! pic.twitter.com/ZyDY3bKoi5

The Crosstown Shootout is the annual college basketball game played between the University of Cincinnati and Xavier University?both based in Cincinnati, Ohio and only three miles apart. The schools first met on the basketball court in 1927 before the rivalry game took a hiatus until 1942. The game has taken place every year since the 1945-46 season, with Cincinnati leading the series 51-36 as of the 2019-20 season.

The rivalry built tension in the years leading up to the brawl. In 2008, there were six technical fouls called that peaked with Xavier’s Kenny Frease head-butting Cincinnati’s Yancy Gates. The next year, spirited verbal exchanges resulted in both benches clearing and Jordan Crawford of Xavier and Rashad Bishop of Cincinnati were issued technicals. In 2010, Xavier guard Tu Holloway received a technical for throwing a cheap elbow late in a 66-46 Cincinnati victory.

The 2011 game?infamously named the Crosstown Punch-Out?showed signs of trouble at the end of the first half when Cincinnati reserve Octavius Ellis entered a verbal altercation with Xavier point guard Mark Lyons. The two had to be separated, and the head coaches were given warnings that further behavior would result in technical fouls.

Following a close first 20 minutes, Xavier pulled away after halftime. Tensions broke at the end of the game when Holloway scored a basket to give the Musketeers a 17-point lead with 18 seconds remaining. As he jogged back to the other end of the court, he exchanged words with the Bearcat bench. This caused Cincinnati’s Ge’Lawn Guyn to confront Holloway. Guyn tried to reach for Holloway’s throat but was met by Holloway’s teammate Dezmine Wells, who pushed Guyn to the ground.

Yancy Gates then threw the ball at Holloway’s head, and the brawl ensued.

Gates met Xavier‘s Frease once again, and this time Gates laid a blow to Frease that caused a gaping gash under his left eye. UC’s Cheikh Mbodj stomped on Frease’s head as he tried to crawl away from the fight.

In the midst of the melee, Ellis confronted Lyons again by throwing punches. Lyons retaliated with teammate Wells by throwing more haymakers. Gates intervened by getting into it with a Xavier backup. The brawl finally subsided with the help of assistant coaches and referees. The game was called with 9.6 seconds left and Xavier winning 73-56.

Aftermath of the Crosstown Punch-Out

Cincinnati coach Mick Cronin was furious and demanded every player on his team remove their jersey after the game. Even with the suspension, Cronin said his players had to earn their way back onto the team. He made the suspendees publicly apologize as the first step in earning their uniform back.

All-American Tu Holloway’s suspension was due to his postgame press conference comments about toughness.

Xavier coach Chris Mack took responsibility for allowing Holloway and Lyons to talk to the media.

The rivalry was moved off either campus to U.S. Bank Arena the following two years before moving back to the on-campus venues in 2014.

The Crosstown Punch-Out is one of the ugliest brawls in college sports. It shows just how passionate college rivalries are, to the point where violence broke out between players. Luckily, there haven’t been any major incidents between the University of Cincinnati and Xavier since.

MORE: Fight Between Women’s Basketball Teams Gets Out of Control