Loaded with elite talent at the college level but also players who had great professional careers, the 'Canes football team of 2001 destroyed their competition on all sides of the ball and easily won the BCS National Championship game. They were the definition of domination.

Every school's fan base will try to make a case for their team of a certain year, but there are only a handful that even have an argument. Those arguments are still wrong. Not only did Miami destroy its competition, but the talent they had was taken high in the NFL Drafts that followed and they succeeded at the next level, too.

Why They're The Greatest CFB Team Ever 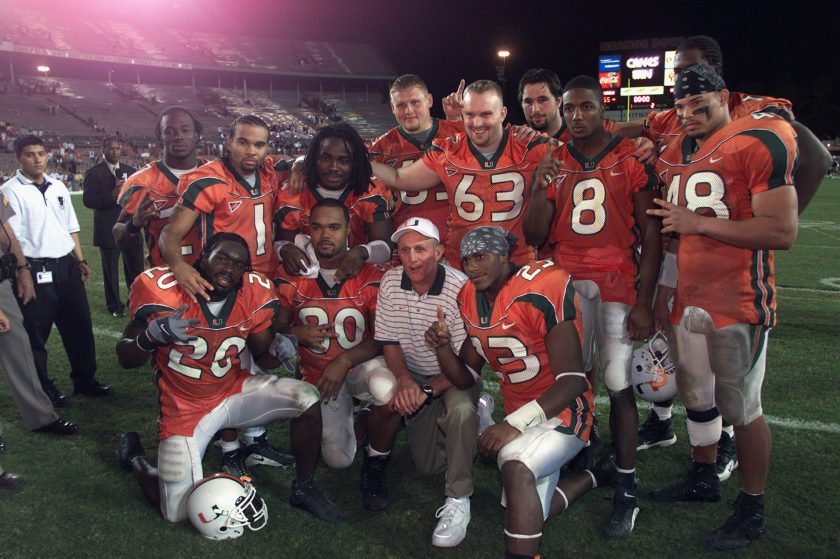 That 2001 Miami team, led by head coach Larry Coker in his first season, went undefeated and had just two games finish within 20 points. Their closest test came on road against the Boston College Eagles in an 18-7 victory, that included a late Ed Reed-Matt Walters pick-six. Then in the final game of the regular season, they beat the 14th-ranked Virginia Tech Hokies in Blacksburg, 26-24.

The Hurricanes averaged 42.6 points per game and allowed just 9.75 points per game. They didn't just put up great stats because of playing in the Big East; they killed opponents from other conferences. In five non-conference games, four of those from a Power Five conference, they averaged 44.4 points and gave up just 12.4. Those teams were Penn State, Troy, Florida State, Washington and Nebraska.

The defense not only kept teams from scoring, but also scored quite a bit themselves. Throughout the season, the Canes' defense allowed just 13 touchdowns, but scored eight of their own on turnovers.

Is there a better college football team than the 2001 Miami Hurricanes? Loaded. pic.twitter.com/AYoAGY9xPR

In a two-game span, Miami had the largest deficit against ranked opponents in college football history. For their ninth win of the season, the 'Canes destroyed the 14th-ranked Syracuse Orange, 59-0. They followed that up a week later with a 65-7 beat-down of the 12th-ranked Washington Huskies, revenge for their only loss of the 2000 season that ended with the Hurricanes being snubbed at a spot in the National Championship game.

They went on to beat the Hokies for a third-consecutive win over a ranked opponent and then beat Nebraska with ease, leading 34-0 at halftime of the 2002 BCS National Championship at the Rose Bowl thanks to an insane performance by wide receiver Andre Johnson, who had seven catches for 199 yards and two touchdowns.

Imagine this '01 squad facing the best teams of the College Football Playoff era? They'd make Alabama look like the South Alabama Jaguars. Now, let's take a look at that loaded roster and lineup. 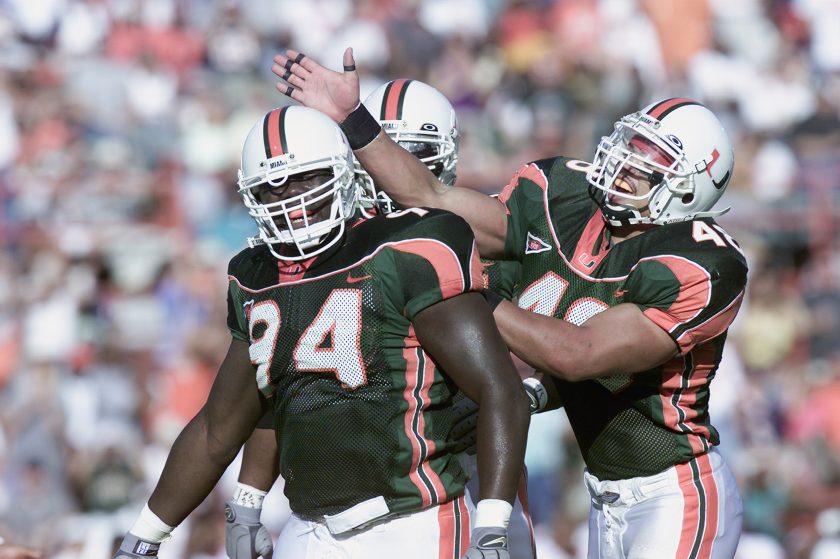 RELATED: Vince Wilfork Won 2 Super Bowls, But Where is He Now?

Not only did they dominate their opponents on the field, but they did so in the draft as well. At some point over the next four years, NFL teams decided to use a draft pick on a member of the 2001 Miami Hurricanes 38 times, 17 of which came in the first round.

Read that again: 17 FIRST-ROUND PICKS ON ONE TEAM.

That also included the best first-round performance for a school in NFL Draft history with six players going in the first round of the 2004 NFL Draft. Alabama tied that mark during the 2021 NFL Draft.

Of the 22 starters from the 2002 Rose Bowl, 19 were drafted by an NFL team. And of the 38 players drafted, 13 players were selected to the Pro Bowl at some point with a total 43 pro bowl appearances. That is unfathomable talent.

The list of players taken in the NFL Draft from the 2001 Miami Hurricanes is absurd. pic.twitter.com/EdaPY7yfnk

These are the players who were taken in the first round of the NFL Draft from 2002-2006 that were on this team and what pick they were taken with:

There were also players who were taken later in the draft that had great pro careers. Running backs Clinton Portis and Frank Gore were taken in the second and third round, respectively, and they are both in the top 32 in NFL rushing history with Gore currently third on that list. Willis McGahee, the second-stringer on the team, was a first-round pick after a record-setting 2002 season.

Even fullback Najeh Davenport was taken in the fourth round of the 2002 NFL Draft and had an eight-year NFL career. 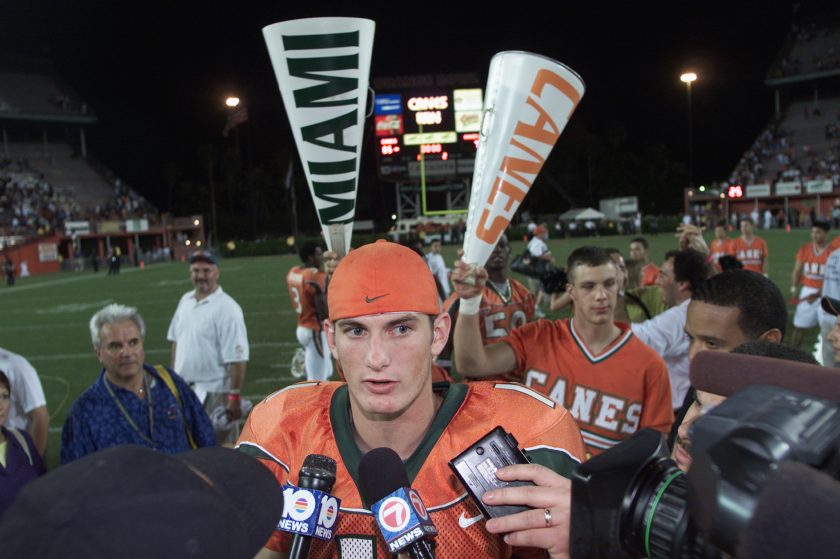 The biggest knock on the 2001 Hurricanes team is the lack of a historic quarterback. To have a quarterback named a finalist for the Heisman Trophy is a pretty nice thing, but to have him named a Heisman finalist twice gives quarterback Ken Dorsey some credibility as a college QB.

He was helped by a group of great offensive lineman that didn't allow a sack until the seventh game of the 2001 season against Temple, and they rarely allowed Dorsey to be touched all season.

Dorsey was the glue that held this team together. He went 38-2 as Miami's starting quarterback and left with school records in total offense (9,486), passing yards (9,565), passing touchdowns (86), completions (668), attempts (1,153), consecutive passes without an interception (193) and consecutive games with a touchdown pass (31). He still holds several of those today.

Good luck finding an NCAA team in history that'd compete with the '01 Miami Hurricanes, and even better luck assembling a team like them ever again.

This article was originally published June 28, 2019, but this team is the greatest ever. Let's debate it.

MORE: How Much Does Miami's Turnover Chain Cost?