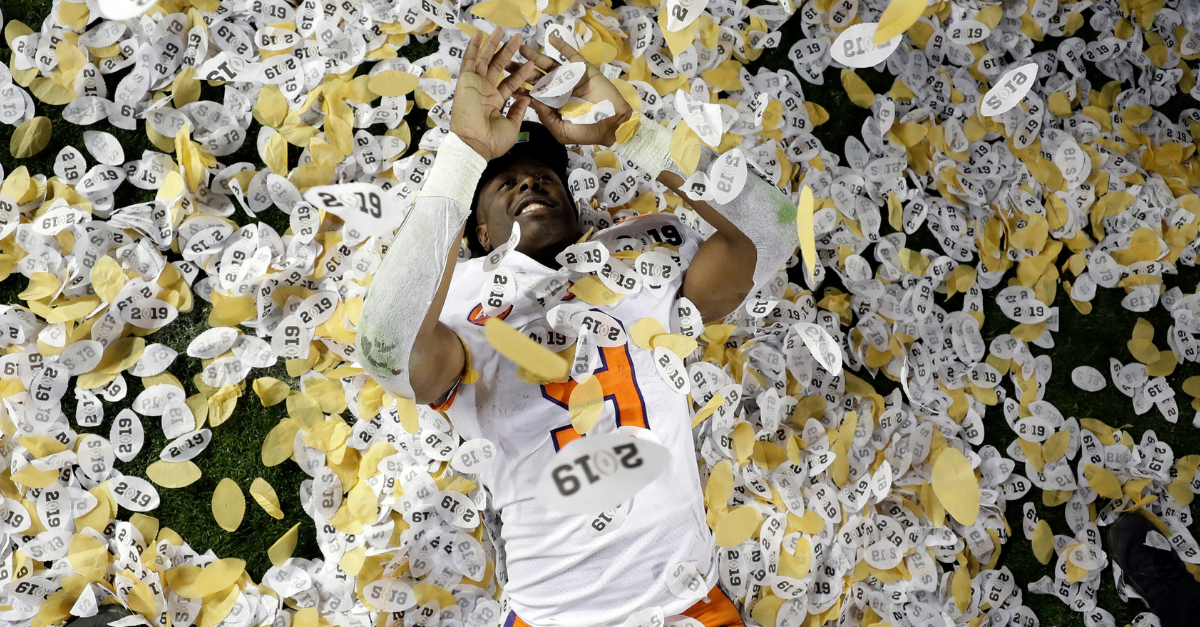 The Clemson Tigers know all about confetti these days. The current kings of college football have some massive championship rings to prove it, too. Dabo Swinney?s teams have won four-straight ACC titles, three College Football Playoff semifinals, and two CFP National Championships over Alabama since 2015. All they do is win and eat fast food when it?s done.

Recruiting to Clemson, South Carolina isn?t nearly as hard as it once was. But when the Tigers are hosting a high-profile prospect, they apparently want them to get a feel for what it?s like to take pictures with confetti all around. That apparently is also a secondary NCAA violation.

Like every school does, Clemson athletics released its self-reported NCAA violations for the 2018-19 school year earlier this week. Among the football violations is one of the biggest flex a program could have involving confetti on October 17, 2018.

?Confetti was utilized by institutional staff during a photo shoot that took place during a prospective student-athlete?s official visit.?

The State obtained a copy of Clemson football's self-reported violations for 2018-19. The violations ranged from a player being paid more than the going rate for work … to an impermissible use of confetti. https://t.co/mfodYPHZHb

According to The State, Clemson self-reported 22 NCAA violations. Among them, 13 were from football, two from the men?s basketball program, two from volleyball, and one each from men?s tennis, men?s soccer, women?s tennis, rowing, and track and field. All of them are considered secondary violations, which are far some severe.

Here is the breakdown of Clemson Football?s self-reported violations, per The State:

Aug. 6, 2018: Student-athlete appeared in a social media promotion of a (redacted) after (redacted).

Aug. 30, 2018: Staff sent out a printed questionnaire mailer to 221 prospective student-athletes which included general correspondence related to life-skills programming prior to September 1 at the beginning of their junior year in high school.

Oct. 17, 2018: Confetti was utilized by institutional staff during a photo shoot that took place during a prospective student-athlete?s official visit.

Nov. 21, 2018: A prospective student-athlete received electronic correspondence that was sent by the sport staff prior to September 1 of their junior year of high school.

Jan. 3, 2019: On (redacted date) 2018 the institution publicized the signing of a prospective student-athlete who had not signed with the institution.

Feb. 5, 2019: Student-athlete received payment from an owner of a private residence to work on three occasions and was compensated above the going rate for the work that was completed.

May 23, 2019: Nonscholastic sport team took an unofficial visit to Clemson?s campus after they had reported on call for travel to a competition in another state.

May 30, 2019: Sport staff provided a meal and per diem for the same meal to student-athletes.

May 30, 2019: A prospective student-athlete and two of his high school coaches obtained special seating during an institutional intrasquad scrimmage.

June 20, 2019: Staff posted a picture and live updates of student-athletes engaging in voluntary athletically-related activities on a social media account.

July 2, 2018: Student-athlete promoted a company?s sale of apparel that included his name via social media.

Most, if not all, of these infractions are very common and will likely get Clemson head coach Dabo Swinney a slap on the wrist. None of the violations will give the school?s athletic department any nightmares.

However, the improper use of confetti as part of a photo shoot is a new one and one of the strangest violations out there. It?s also pretty hilarious and genius considering how much the Tigers? football program have won the last four seasons.

Let?s put it this way: Clemson has more to worry about during fall camp than whether or not it?s going over the school?s mileage rate, ground transportation expenses, and even confetti.

RELATED: The 15 Most Electric Entrances in College Football