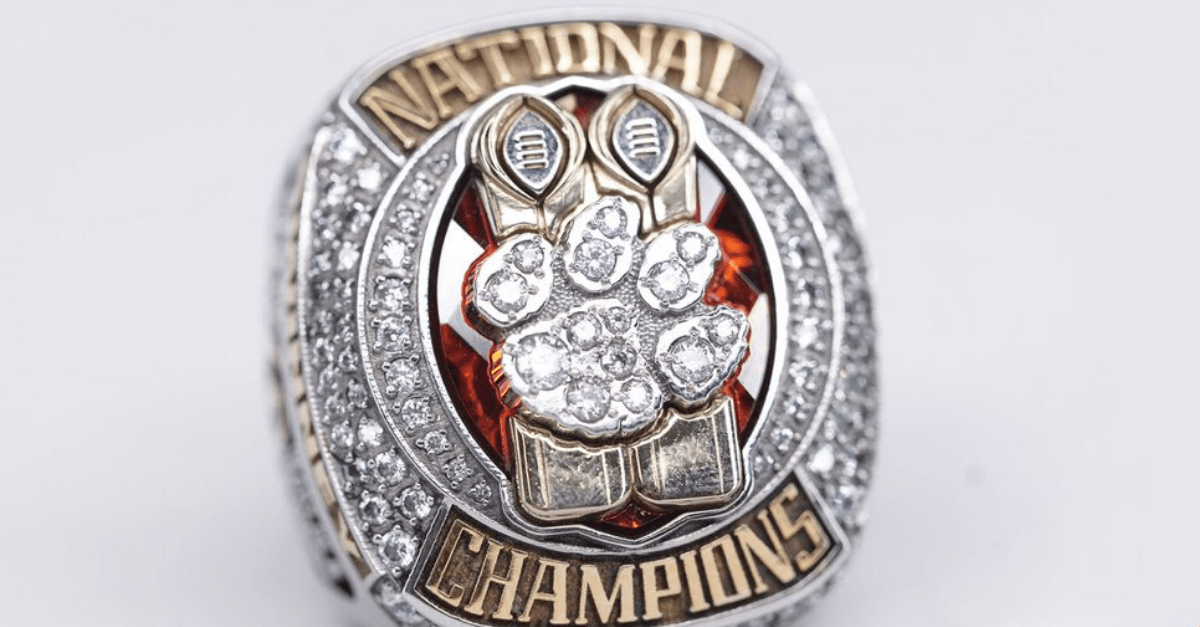 For months, and throughout the entire 2018 college football season really, all people could talk about was the Alabama Crimson Tide. How badly will the Tide beat whatever team opposes them in the College Football Playoff national title game? Could Nick Saban?s team actually beat an NFL team? Is this dynasty ruining the college game as we know it? Then, the unthinkable happen.

The Clemson Tigers took down the reigning national champs at Levi?s Stadium in Santa Clara, California. Not only did they win, they destroyed the Crimson Tide 44-16 back in January to claim their second title in three years and finish the season with a perfect 15-0 record.

In addition to the CFP championship trophy, a National Championship Game MVP award for star freshman quarterback Trevor Lawrence, a fat bonus check for head coach Dabo Swinney, and a trip to eat fast food with President Donald Trump at the White House, the entire Tigers team also got some flashy new rings. Luckily, those rings arrived just before the program?s annual spring game on Saturday at Clemson Memorial Stadium in Death Valley.

READ MORE: Hey, Clemson: You Should Thank Alabama for Your Dynasty

Pretty cool, right? They are truly one-of-a-kind in more ways than one. Not to mention, the Tigers also received one for winning the ACC title last season.

According to TMZ Sports, the national championship rings, which were made by Jostens and Thomas Rhodes, has two trophies? signifying titles in 2016-17 and 2018-19 ? and 18 stones at the top to represent Clemson?s 18 ACC titles. There are also 14 stones inside the Tiger paw print to represent the program?s 14-straight bowl game appearances.

Is that it? Absolutely not.

On one side of the ring, it has the CFP National Championship Game score with ?Eye of the Tiger? and ?Heart of a Champion? on it.

On the other side, well, it mocks Alabama.

Clemson has been to the College Football Playoff four-straight times so that fact had to be on it. However, it?s the bold claim of ?BEST EVER? that’s really making people talk.

My brothers. Best ever. 💍#EarnedNotGiven

Then, the Tigers crushed Pittsburgh in the ACC Championship game destroyed the Notre Dame Fighting Irish in the CFP semifinal before taking it to Alabama in the title game.

This might be all the motivation Alabama needs to return to the NCAA title game once again and potentially face a pretty cocky Clemson football team at the Mercedes-Benz Superdome in New Orleans next season.