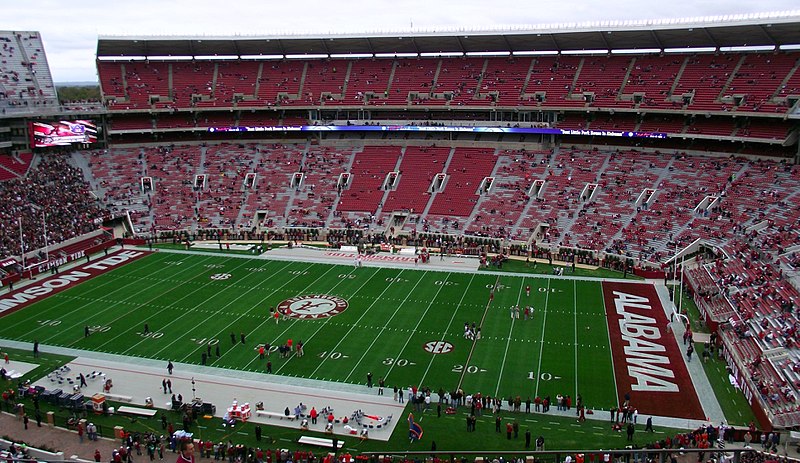 The Alabama Crimson Tide love beating the snot out of unworthy NCAA opponents. In 2018, the Tide embarrassed Arkansas State 57-7. The year before, they smoked Mercer 56-0. When Kent State came to Tuscaloosa in 2016, Alabama sent them back to Ohio after a 48-0 beatdown. Alright, you get the point. The Crimson Tide host inferior teams and annihilate them every single year.

For the most part, the University of Alabama doesn’t have an attendance problem, but they do when it comes to UA students. Head coach Nick Saban ripped students last year for not showing up to watch his team (yep, you guessed it) run the Louisiana Ragin’ Cajuns out of Bryant-Denny Stadium, 56-14. This year, the university is trying to convince kids to stay and watch these sad excuses for college football games by introducing a new program called “Tide Loyalty Points.”

According to AL.com, an email sent across campus in April by the Alabama athletic department informed students about purchasing Alabama football tickets for the upcoming season. This is common practice, even though most students usually buy season tickets with plans to attend the biggest games of the year, then get drunk at the rest and go home early rather than watch Alabama destroy Western Carolina. (Oh yeah, that’s really happening this season.)

At the end of the email, the school introduced the new “Tide Loyalty Points” program, which shouldn’t be confused with the loyalty program that Tide (the laundry detergent) offers loyal clothes-washers all over the world.

“Through the Tide Loyalty Points program, students will earn points for attending home football games and for their support in the 4th quarter,” the email read. “Those points will contribute to students? priority access to regular and postseason tickets.”

Here’s how the program works, according to The New York Times:

“The Tide Loyalty Points program works like this: Students, who typically pay about $10 for home tickets, download the app and earn 100 points for attending a home game and an additional 250 for staying until the fourth quarter. Those points augment ones they garner mostly from progress they have made toward their degrees – 100 points per credit hour. (A regular load would be 15 credits per semester, or 1,500 points.)”

But how is Alabama going to keep kids from hitting the bars early? Are they going to form a human barricade and force them not to run out when the Tide is up 30 points at halftime? Will there be a prize store with Alabama T-shirts celebrating another massacre?

In fact, the app developed by FanMaker is actually tracking students. The app follows students inside Bryant-Denny Stadium, and when they leave, they’re ineligible for that 250 point fourth-quarter bonus. Alabama Athletic Director Greg Byrne said tracking stops once they’re outside the stadium, but still, this is just plain weird.

The app experienced issues in Alabama’s first home game of 2019 against New Mexico State. Regardless, the Alabama student section didn’t show up for in force to to watch a 52-point blowout, and Saban trashed at them once again.

Last season, the school tried to remedy this problem by bringing back Dixieland Delight during the fourth quarter of games just one week after Saban let loose on student attendance being non-existent for their game against the Ragin’ Cajuns.

“Look, our players work too hard and they deserve to have everything and people supporting them in every way and have tremendous spirit for what they?ve done. And they might not be able to continue to do it and we?re going to work hard to continue that but there?s a part of it that other people need to support them, too. And there has to be a sprit that makes it special to play here because that?s what makes it special to be here. And it that?s not here, does it continue to be special to be here or not? That?s the question everybody has to ask and I?m asking it right now.”

This Crimson Tide rewards program is another attempt to make non-SEC games seem relevant, but that’s not going to fix the “problem” Alabama has: they’re just too damn good.

These regular season games aren’t going to draw more attention no matter how many “loyalty points” the university passes out to the Alabama fan base. At the end of the day, there are plenty of better things to do than watch Tua Tagovailoa ride the bench while Nick Saban’s third-teamers run out the clock in the fourth quarter.

WATCH: Could the Crimson Tide Actually Beat This NFL Team?