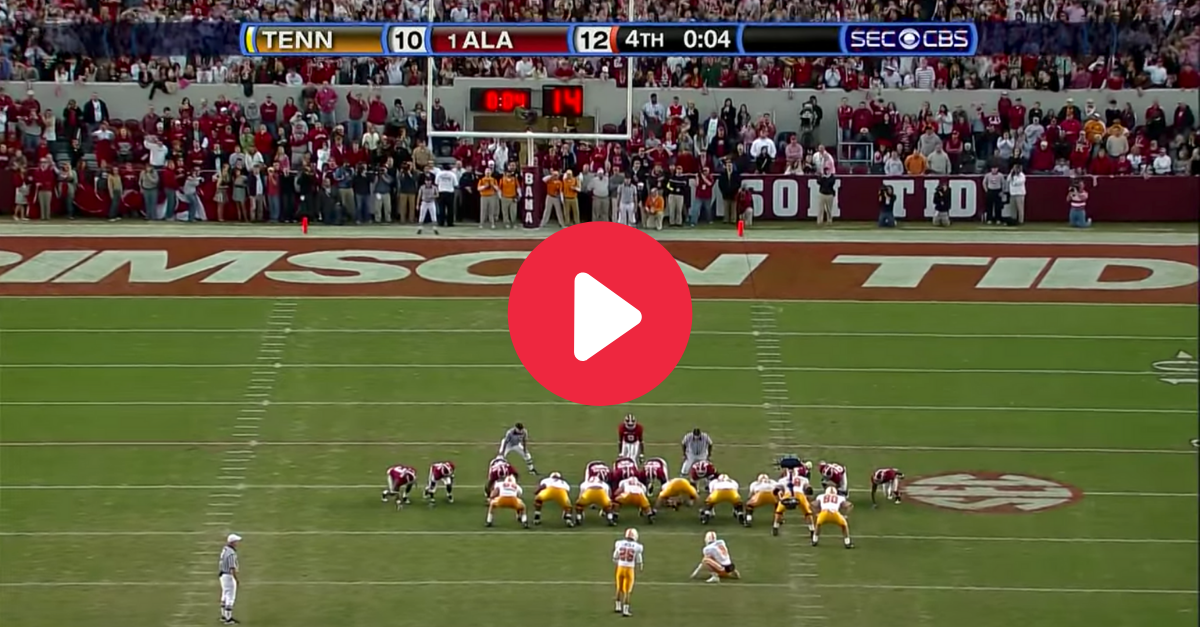 On October 24, 2009, the top-ranked Alabama Crimson Tide hosted the upset-mined Tennessee Volunteers for another installment of the “Third Saturday in October.” Vols head coach Lane Kiffin ? who’s since bounced around from Tennessee to USC to Alabama to Florida Atlantic to Ole Miss ? positioned his team to beat Alabama for the first time three years. However, that day ended up being the closest Tennessee would ever come to beating their rival over the decade that followed.

The Volunteers managed to force a turnover late in the game, then scored their only touchdown on an 11-yard pass from QB Jonathan Crompton to Gerald Jones. On the ensuing onside kick, Tennessee recovered with a minute left, putting themselves in prime position to steal an SEC win on the road.

That is, until Alabama’s Terrence Cody stepped back onto the field.

In his collegiate career, the two-time unanimous All-American was an unstoppable force in the middle of the Crimson Tide’s defense. Cody almost always faced a double team to counter his massive size and run-stopping ability as he helped lead Alabama to the 2010 BCS National Championship over Texas.

“Mount Cody” only blocked two kicks during his college career, and both of them came in the same game when Alabama needed it most.

Terrence Cody won Super Bowl XLVII with the Baltimore Ravens, but constant fluctuations with his weight ? he reportedly tipped the scales at 370 pounds during the Senior Bowl ? as well as legal problems ultimately forced the defensive lineman out of the NFL after only five seasons.

Still, it was the Third Saturday in October back in 2009 that secured his college football legacy in Tuscaloosa. Alabama beat LSU the following week, rolled Florida in the SEC Championship Game, and topped Texas to deliver Tide fans a perfect 14-0 national championship season. Mark Ingram won the Heisman Trophy.

Every Tennessee fan sure wanted to be on ol’ Rocky Top this day because the Alabama football faithful were singing “Rocky Block” at Bryant-Denny Stadium all night long.

This article was originally published March 13, 2019.