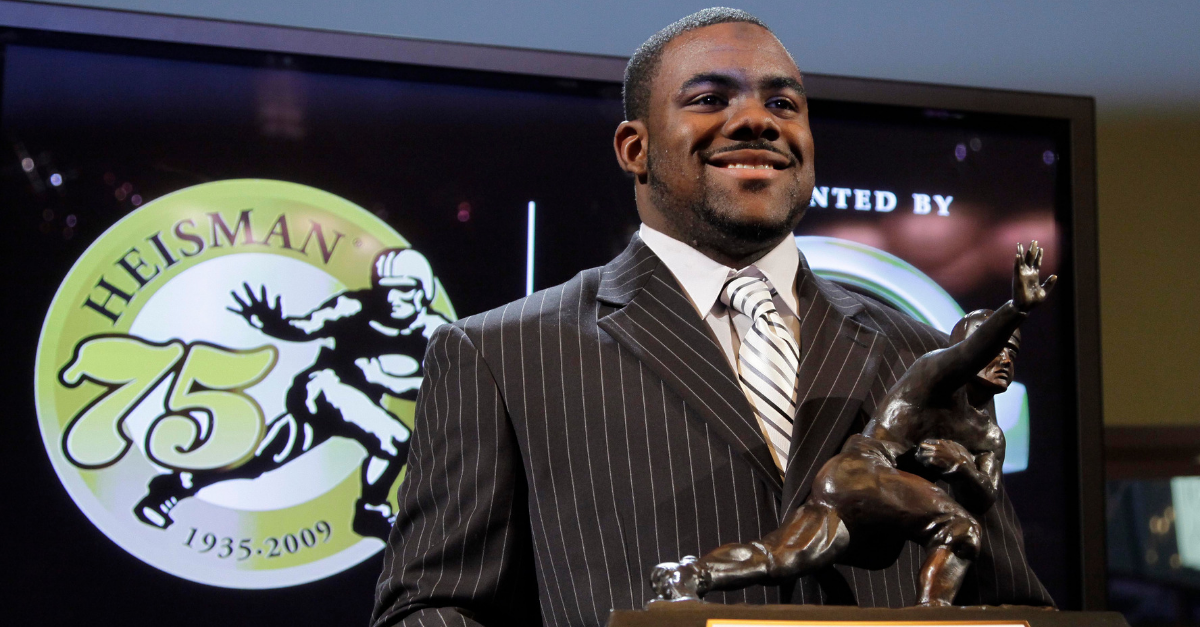 The history of Heisman Trophy award voting is littered with snubs. Typically, it’s the quarterbacks receive preferential treatment because the position is the most important on the field and they can affect a team’s record more than anyone else.

Adrian Peterson rushed for nearly 2,000 yards as a freshman at Oklahoma and lost out to USC’s Matt Leinart for that reason. Plenty more running backs and wide receivers have experienced the same, like Pittsburgh’s Larry Fitzgerald, San Diego State’s Marshall Faulk and California’s Chuck Muncie in 1975.

If the award is given to the NCAA’s best player that year, and the best way to determine that is through individual statistics, then a logical college football fan has to wonder how Mark Ingram won (no, stole) the award over Toby Gerhart in 2009.

In all of the Alabama Crimson Tide‘s years, they had never produced a Heisman Trophy winner. All the championships, banners, rings and All-Americans couldn’t buy them one. Ingram became the first Heisman Trophy winner in Alabama history, but he wouldn’t be the last ‘Tide player to accept the award in New York City. See: Derrick Henry.

Then you have the fact that Alabama went a perfect 14-0 that season under head coach Nick Saban. The Crimson Tide stomped the Florida Gators in the SEC Championship Game and then Texas, 37-21, in the BCS National Championship Game against fellow Heisman hopeful Colt McCoy. He finished as the third-place vote-getter.

Voters probably felt pressured to give it to Ingram. But take a look at his numbers and you’ll find he didn’t really deserve it. That’s why Ingram received 227 first-place votes and won the award by just 28 total points, the closest margin between two finalists in the history of the award.

Gerhart, who played alongside quarterback Andrew Luck and for head coach Jim Harbaugh at Stanford, outperformed Ingram in nearly every category. But the Stanford Cardinal finished just 8-5 and 6-3 in the Pac-10. Despite all its star power, Stanford found itself outside of The Associated Press Top 25 final rankings.

The Heisman Case for Toby Gerhart

Gerhart was not the fastest back. He couldn’t cut on a dime or bounce outside and burn a defender. Heck, he wasn’t even much of a threat in the passing department. But he was a freakin’ bruiser who wore down defenses.

I’ll put Gerhart and Ingram’s numbers in one of those “Player A/Player B” comparison formats and let you decide who deserved the hardware.

Player A finished second in balloting. Player B finished first. Player A, of course, is Mr. Gerhart. Player B is Ingram. To me, it’s pretty obvious Gerhart deserved it but was snubbed because his team wasn’t playing in the national title game at the end of the season.

That’s not to say no one else was worthy of the NCAA’s highest honor. The field was undoubtedly strong.

McCoy threw for 3,500 yards at Texas. Clemson’s C.J. Spiller totaled 1,715 yards from scrimmage. Tim Tebow, attempting to join Ohio State’s Archie Griffin as the only two two-time winners, threw and rushed for a combined 3,805 yards at Florida. Nebraska defensive lineman Ndamukong Suh put up 12 sacks and 20.5 tackles for loss, but a defensive player hadn’t won since Michigan’s Charles Woodson in 1997.

But Gerhart’s numbers should’ve been too eye-popping to ignore.

Gerhart wasn’t just padding his stats against the weaker teams, he was destroying the best teams in the Pac-10.

Ingram, a sophomore who played high school ball in Flint, Michigan, had his moments. The 246-yard outburst against South Carolina and pair of 100-yard rushing games against the Longhorns and Gators all stand out.

I get that Gerhart wasn’t the NFL prospect or complete football player Ingram was. The Minnesota Vikings selected him in the second round (51st overall) of the 2010 NFL Draft and he amassed just 1,675 yards over six season between the Vikings and Jacksonville Jaguars mostly in backup roles. Ingram, on the other hand, has 6,000 rushing yards to his name and is still going strong with the Baltimore Ravens.

But Gerhart put up better numbers that year. He was the better player over the course of the 2009 season.

Peterson ran for nearly 2,000 yards as a freshman in 2004. Faulk’s 1,700 yards from scrimmage in 1992 wasn’t good enough to best Miami quarterback Gino Torretta’s 19 touchdowns and seven interceptions. Fitzgerald hauled in 22 touchdowns on 1,672 receiving yards yet lost out to Oklahoma’s Jason White in 2003.

Unlike his snubbed counterparts, Gerhart was directly up against another player of the same position. And he outperformed him. He was unfairly penalized by the Heisman voting system because of his team’s record, something he couldn’t control.

If that’s gonna be the case going forward, maybe we need to trash the Heisman and create a whole new NCAA MVP award that doesn’t take into account team record.