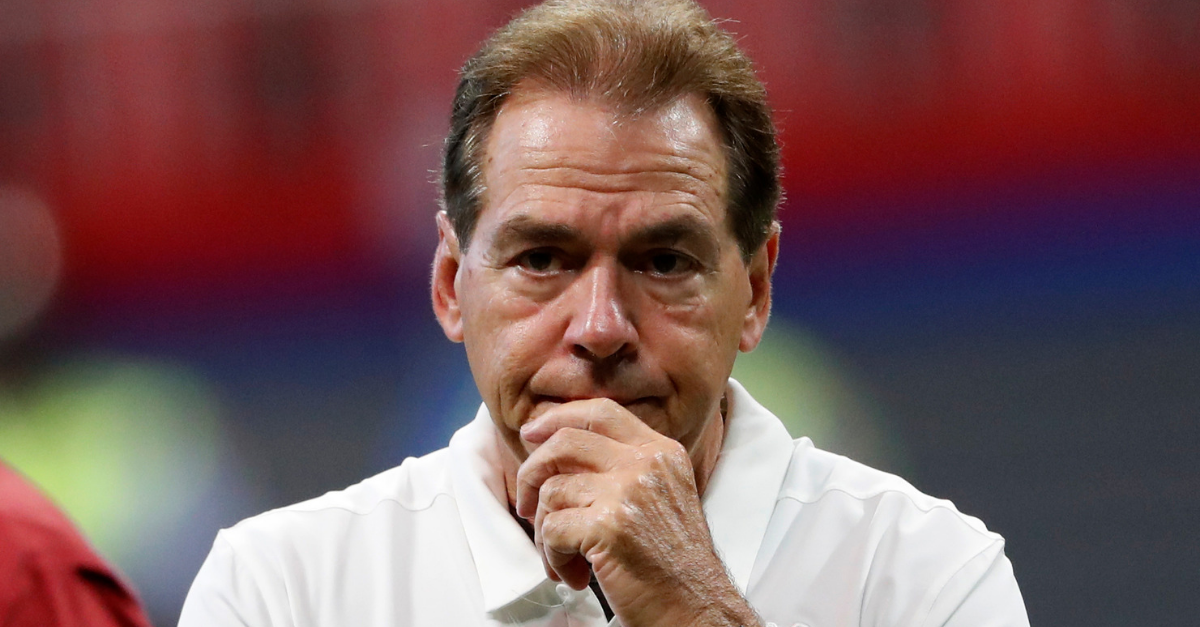 College football atmospheres are the best in all of American sports. No where else is the energy, passion and sheer noise more evident than when tens of thousands of die-hard students and alumni gather around a football field.

At the University of Alabama, the Crimson Tide have one of the most loyal fanbases in the country that dates back to the days of College Football Hall-of-Famer Bear Bryant. These days, the program is as dominant as ever with no signs of slowing down in 2019. Apparently, the next generation of Alabama faithful just aren’t as excited to see the Crimson Tide win anymore.

During last year’s home game against the Louisiana-Lafayette Ragin’ Cajuns, the Alabama Crimson Tide’s student section inside Bryant-Denny Stadium was noticeably sparse for a defending national champion off to a historic start in 2018.

At his press conference the following Wednesday, head coach Nick Saban criticized Alabama students for not showing up to watch the Tide thrash a Sun Belt Conference bottom feeder, 56-14.

.@AlabamaFTBL #NickSaban goes off Wednesday night on too many empty seats at the stadium last weekend.

You can tell this has building up over the last few days.

Classic Saban and he does not hold back!#Bama#RollTide @finebaum @ClayTravis @darrenrovell pic.twitter.com/p7BQnptEfQ

“I can honestly say I was a little disappointed that there weren’t more students at the last game, and I think we’re trying to address that,” Saban said. He added his personal belief that ticket sales should be offered to the “great people” who travel with the team and not reserved for only students who might decide not to come to the game.

“When I first came here they used to play that tradition thing up there and everyone was cheering and excited and happy and there was great spirit,” Saban said. “Now, they don’t even cheer. They introduce our players and nobody even cheers.”

“Look, our players work too hard and they deserve to have everything, and people supporting them in every way, with tremendous spirit for what they’ve done. And they may not be able to continue to do it, but we’re going to work hard to try and continue that. There’s a part of it that other people need to support them too, and there’s got to be a spirit that makes it special to play here because that’s what makes it special to be here. And if that’s not here, then does it continue to make it special to be here or not? I mean, that the question everybody’s got to ask, and I’m asking it right now.”

In 2019, Alabama hosted the mighty New Mexico State. (Kidding. The Aggies are 39-131 since 2005.) Tua Tagovailoa and the Crimson Tide rolled in a not-at-all-shocking victory on Saturday afternoon, winning 62-10. Once again, however, Saban decided to bash the student section for not showing up in force.

Keep in mind, the temperature for at kickoff was 94 degrees, and the game’s attendance still reached 100,710 people.

“So, everybody’s got to make a sacrifice. You want to be the lion? Everybody got to do something. Everybody wants to be No. 1. If I asked that whole student section, do you want to be No. 1? Nobody would hold their hand up and say I want to be No. 4. They would all say No. 1. But are they willing to do everything to be No. 1? That?s another question. You can ask them that.

RELATED: Nick Saban is an Overrated Cheater? This Coach Thinks So

There are two big parts to this that need to be broken down here. First, let’s consider why people aren’t coming to these games in the first place. For starters, one of the best teams in college football played a non-conference schedule in 2018 that included Louisville, Arkansas State, Louisiana-Lafayette and the Citadel. These great fans aren’t dumb ? they know Alabama is going to win by 30-plus, so why bother showing up to watch these games at all?

And why do you think Alabama plays such a cupcake non-conference schedule every year? Maybe it’s because nobody outside of the SEC wants to play them?

The Tide have, basically, made themselves so dominant that traveling INTO Tuscaloosa and playing them, effectively scheduling a potential loss, would hurt another football team’s chances of making a high-level bowl game or even the College Football Playoff at the end of the year.

Either that, or Alabama needs to go out and work harder to find someone better to play because students aren’t doing to waste a Saturday afternoon out watching a game they already know the outcome to.

Second part to this rant, and most important of all, this seems so unlike the six-time national championship coach. Saban sounds like a kid who got a ton of birthday presents at a giant party with a big chocolate cake, but somebody forgot to buy his favorite ice cream as the side dish at dessert.

How much more does he want? Saban is already considered one of the greatest football coaches to ever live and has built one of the most incredible college football programs, not just on the field but off it as well. It’s all but inevitable that if the Tide finish a season no worse than with one loss, they’re going to go back to the playoff yet again.

The 67-year-old head coach wants to see support for his players, sure, but don’t criticize the Alabama student section who chose not to watch your team destroy another cupcake in late September.

What are your suggestions for how Alabama might be able to fix the student attendance problem? https://t.co/khx52kdTMd pic.twitter.com/goRYjYHVfV

Does this shocking lack of student attendance say more about the University of Alabama’s dominance over the college football landscape, or should other teams be stepping up to the challenge and dethrone the king as soon as possible?

Well, maybe it’s time Alabama starts realizing that just because they always win, it doesn’t mean they can have everything else, too.