Dabo Swinney's coaching career could be summed up in one sentence: "I meant to say something, but instead said something else completely." That's what happened when the Clemson head coach made comments about the Tennessee Volunteers football team last week. Vols fans didn't take too kindly to Dabo's barb, which led to Swinney making a clarification this week on his "Flipping Burgers" comment. 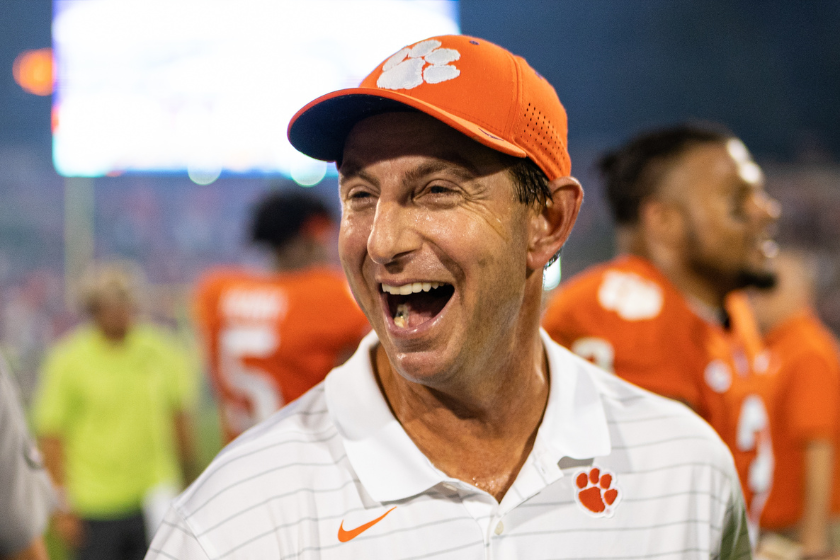 Dabo's comments, made during his weekly radio call-in, came ahead of Clemson's loss to South Carolina. Perhaps that defeat is what forced Swinney to walk back his comments about Tennessee, who had lost to South Carolina the previous week. Here's what Dabo said about the Vols:

"When you're in Tennessee's position, and they're like, 'OK, we beat South Carolina, we beat Vandy,' and they're in the playoffs. They're flipping burgers at the house, having a cold drink watching the championship weekend, 'What are we? Are we three or four? Where are we going? Are we in Arizona or are we in Atlanta?' And the next thing you know, you forget you've gotta go play."

Not great. You can see why Tennessee fans took this as an insult. After all "flipping burgers" is a timeless slight towards someone you feel is inferior. Was Dabo throwing shade at the Knoxville fanbase? According to the Clemson coach, he was not.

"You say, 'OK, you've got a path that's clear, you know, but you have to finish,'" Swinney said at his weekly presser. "They've just got to do this and do that and next week, they can sit at home and flip burgers and watch all the championship games. ... It's not anything against Tennessee. I've got all the respect in the world for Tennessee. People just hear what they want to hear. It was not a shot at them at all. ... I was talking about our guys and how they've got to finish."

Sure, Dabo. That makes total sense, but maybe you could've been a bit clearer. However, while the clarification may make Tennessee fans less agitated, Swinney's comments take on a whole new meaning after the Tigers dropped their rivalry game against Spencer Rattler and the South Carolina. Perhaps Swinney will be more mindful of what comes out of his mouth next time he decides to throw jabs at another team.

Actually, on second thought, he probably won't. This is Dabo Swinney we're talking about after all.

MORE: LSU Fans Thought Clemson's Mascot Stunk, So They Started a GoFundMe for a New One