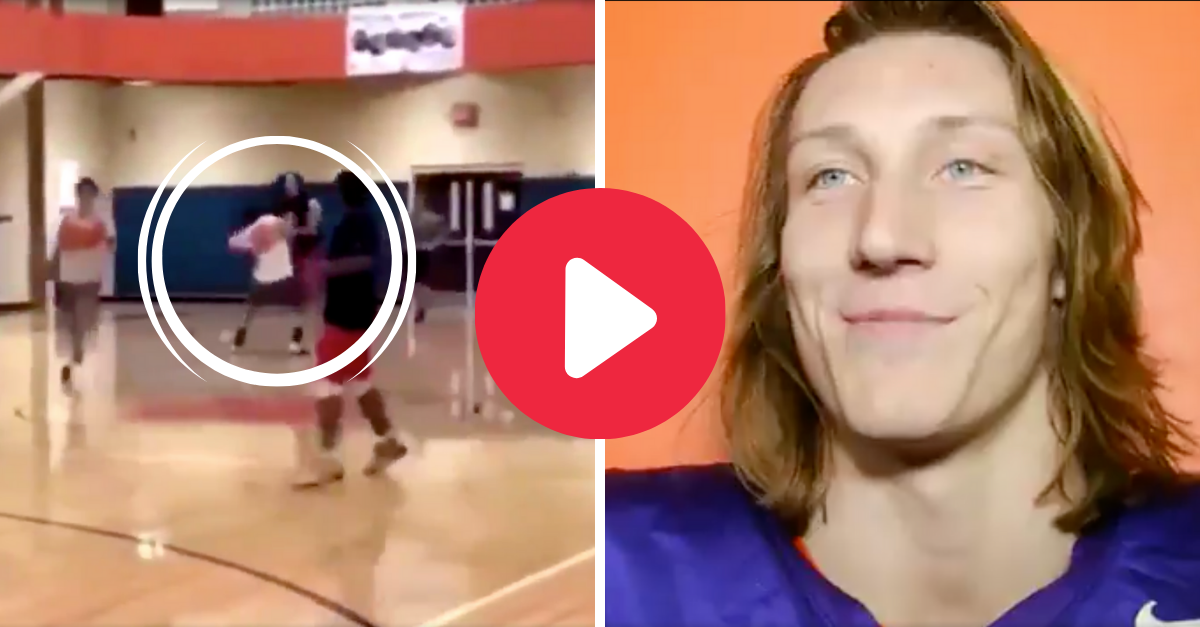 As a star player for the reigning national champions and the early Heisman Trophy frontrunner at the time, one would think Clemson quarterback Trevor Lawrence would have been enjoying his offseason downtime before returning to NCAA college football that spring. That couldn?t have been further from the truth.

Instead of resting and playing video games like many college kids, the 6-foot-5 signal caller was found on campus playing an intramural basketball game, and let?s just say it wasn?t as discreet as Lawrence probably would have liked after what happened.

After missing an open jumper on the right wing, Lawrence decided to press and get the ball back. But then an opponent set a hard screen on the Clemson football team star, and he didn?t take too kindly to that.

Jogging down the floor, Lawrence pushed the screener twice before he landed on his backside and the officials stopped play.

Since this was captured on video, it?s pretty lucky this didn?t escalate any further and got any more physical than the initial shove. Sure, the Clemson quarterback snapped a little bit and was a little rough, but Lawrence made it sound like he had it coming at one point or another.

T-Law even had a small apology after Barstool Sports shared the video on social media.

Lawrence, who threw for 3,280 yards with 30 touchdowns as a true freshman in 2018 and torched the Alabama Crimson Tide during the College Football Playoff National Championship Game, quickly learned that the cameras are always watching him, but thankfully neither the boldest kid on Clemson’s campus, nor the Cartersville, Georgia star quarterback got hurt in the intramural hoops game.

National Championship winning QB Trevor Lawrence told @WSPA7 what he learned from the intramural basketball incident in which he was seen on video having an altercation with a fellow #Clemson student.
Very mature response for a 19-year old quarterback with a tremendous future. pic.twitter.com/cN66DJeD1Y

So many are going to question why this future NFL quarterback was playing in an intramural basketball game to begin with. Clemson head coach Dabo Swinney couldn’t have been happy about this, right?

Nevertheless, it happened, and everyone has moved on. It’s just impossible to forget.