After Starting QB’s Dismissal Over Alleged Abuse, What’s Next for Florida State? 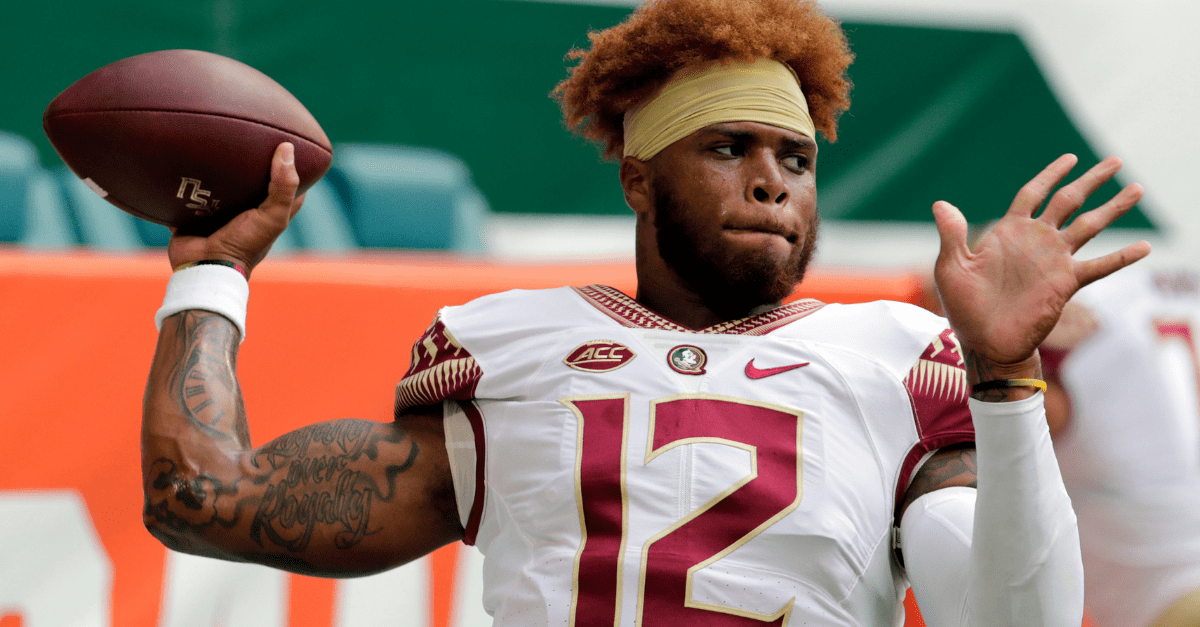 After being accused of domestic violence, starting quarterback Deondre Francois was dismissed from the Florida State Seminoles program by head coach Willie Taggart. In that Instagram video, a male voice is heard hitting and threatening a woman. Although there is no visual evidence to support the claim that the alleged voice is in fact Deondre Francois, Florida State promptly dismissed the redshirt senior from the program on February 2.

With news of Francois’ dismissal from the team, how do the Florida State Seminoles move forward at the most important position on the field?

In 25 games as the Seminoles’ starting quarterback, Francois completed 58 percent of his passes for 6,291 yards, 36 touchdowns, and 21 interceptions. After a great redshirt-freshman season in 2016, there were high hopes that he would lead this team to great things. But poor offensive line play and injuries led to a rather disappointing career, and it ends at Florida State with a lot of what-ifs,

With the redshirt senior gone, it looks like sophomore James Blackman will take over if they can keep him on campus for his junior year. Last month, Blackman entered his name into the NCAA transfer portal, though that doesn’t mean he has to transfer. But due to playing in just four games last season, he was able to receive a redshirt and could play immediately if he did decide to leave for another school.

However, it was reported a few days later that he was questioning his decision and would probably stay in Tallahassee. As the only scholarship quarterback on their roster now, I would think it is almost certain he stays.

In 2017 as the starting quarterback for 12 games when Francois went down with a knee injury against Alabama, Blackman threw for 2,230 yards, 19 touchdowns and 11 interceptions while completing 58.2 percent of his passes. In his only start of 2018, he had his best career game with 421 yards, four touchdowns and one interception on 29-of-46 passing.

I don’t think there is much, if any, drop-off from Francois to Blackman. With Blackman coming into 2019 as a redshirt sophomore, the ‘Noles could have their starter for the next three seasons. It is just important that new offensive coordinator Kendal Briles puts him in good positions and improves the awful offensive line.

With some decent pass-blocking and a running game involving Cam Akers, Blackman could have success moving forward. But with the loss of Francois, it isn’t Blackman’s play that worries me. What if he’s injured? With the hits that FSU quarterbacks have been taking over the last three seasons, it is easy to imagine Blackman going down like Francois did to start the 2017 season that originally gave Blackman a chance to play.

If he is the starter and then gets hurt, there isn’t another scholarship quarterback on the roster at this point. That is why the number one need moving forward is bringing in a solid signal-caller who can play immediately. Whether it is a good recruit like Lance LeGrendre or is transfer Jordan Travis can be given immediate eligibility.

LeGendre is the eighth ranked dual-threat quarterback and a four-star prospect. If he chooses Florida State, he is a great option moving forward. After losing Sam Howell to North Carolina, he is almost a must-get for Taggart and Briles.

Another option in recruiting is John Rhys Plumlee, who is currently committed to Georgia. But the four-star quarterback out of Mississippi took an official-visit to Tallahassee on February 1st and seemed to enjoy himself. If the Seminoles can’t pull in one of these two guys, 2019 could end up being a tough season.