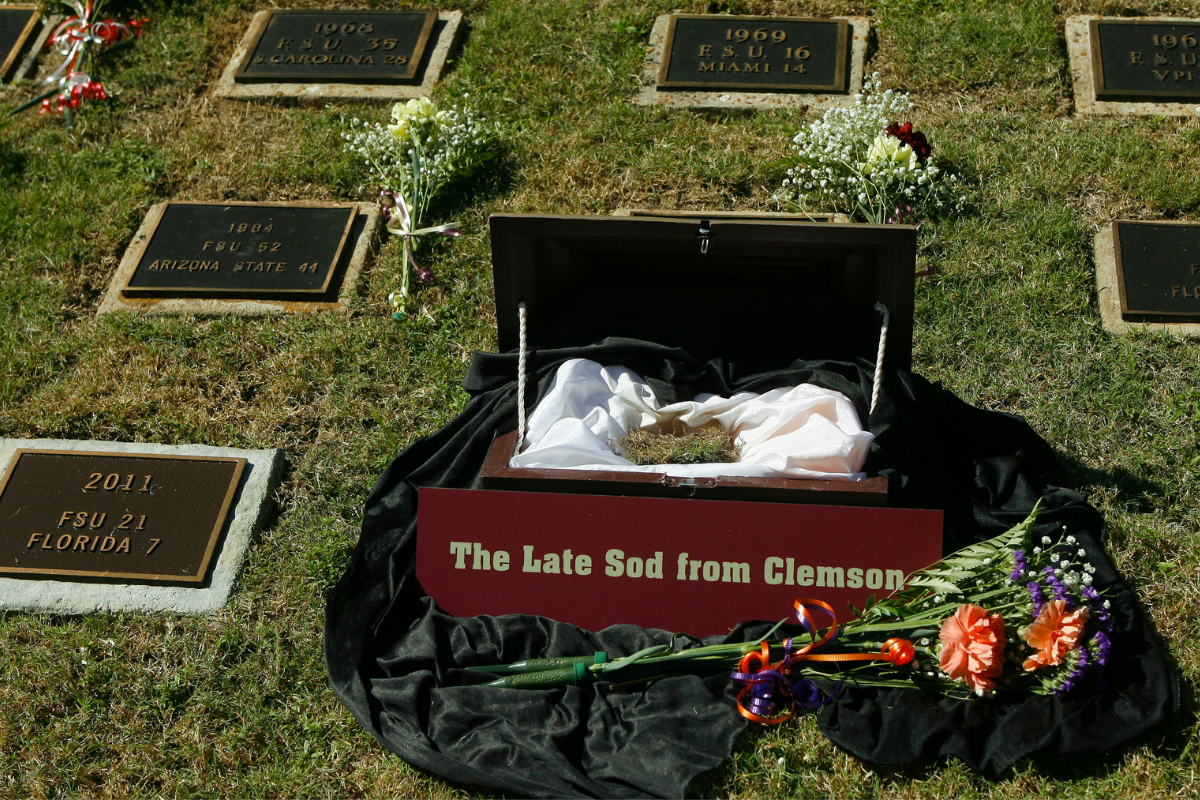 Every school in college football claims to have a great traditions.

Many are popular, but few can compete with Florida State’s Sod Cemetery.

The tradition of taking grass from the fields after a big road win, the FSU football team has built a graveyard to bury that grass since the early 1960s.

RELATED: What Happened to Charlie Ward and Where is He Now?

In 1962, during the ninth season in program history, and the third under FSU coach Bill Peterson, the Florida State Seminoles were challenged by Dean Coyle Moore — a long-time professor and member of the Athletic Board at Florida State University — entering their fifth game of the season:

?Bring back some sod from between the hedges at Georgia.?

Just two days after the Thursday practice, FSU entered Sanford Stadium in Athens and beat the Bulldogs, 18-0. Team captain Gene McDowell pulled up a piece of grass off the field and brought it back to Tallahassee.

McDowell presented the grass to Moore during their next practice and was buried by the professor and head coach at their practice field, starting a tradition that is still practiced almost 60 years later.

It wouldn’t be long before the next game would be commemorated there, either.

Two more games were commemorated at FSU’s Sod Cemetery during the 1962 season. On November 10, they would travel to Atlanta and play Georgia Tech, which was in the SEC at the time, with the first two Sod Games being against Georgia teams in the Southeastern Conference.

Fans who make the trip out to the Doak Campbell Stadium are able to get a glimpse of the cemetery for themselves.

There are certain types of games that Florida State considers a Sod Game. Any road game the Seminoles are an underdog, all road games against the Florida Gators, and all postseason football games.

The importance of this tradition is remembering and honoring some of the most important and difficult games in the program’s history. The team captains explain this to the team during practice before any Sod Game.

In the program’s football history, there are 105 games that are a member of FSU’s cemetery, as of 2017.

Ending a season with a win is always important. It can really decide how a season is viewed and can make all the difference in recruiting. And since it is usually a team that is typically evenly matched, it is a great opportunity for FSU to face a talented team from outside the ACC.

The last Sod Game in the cemetery is No. 105, when the ‘Noles beat Southern Mississippi in the Independence Bowl at the end of the 2017 season. They beat Michigan in the 2016 Orange Bowl the season before that, too.

Three of the last seven Sod Games were for bowl games, including the 2014 BCS National Championship against Auburn.

The first NCAAA bowl game that was added to the cemetery was the 1965 Gator Bowl, when FSU finished the season with a 36-19 win over the Oklahoma Sooners.

Almost any season that ends in serious success will have to go through the ACC Championship. That would beating out Clemson in the Atlantic Division, but in 2013 and 2014, they did exactly that to play Duke and Georgia Tech in the ACC title game.

The first ACC Championship game in the cemetery came in 2005, when the Seminoles beat Virginia Tech, 27-22 for Sod No. 79.

Of all 105 Sod Games, 35 have come from bowl games, including just one Cotton Bowl, four Sugar Bowls and three national championships.

At The University of Florida

Like the last two types of Sod Games, this is almost a must-win since the Seminoles end their regular season against the Gators every year. If you want respect as a program, there is no better way to earn it than by beating your biggest rival on their home field.

Florida State did just that in 2015, when it went to Ben Hill Griffin Stadium in Gainesville and beat Florida, 27-2.

The first game against the Gators to be entered into the cemetery was in 1967, when the Seminoles won in Gainesville for Sod No. 15.

To be a serious team, road games are important. However, entering a road game as an underdog obviously means a team is facing a tough opponent. These are the games that can make the difference between a bad season and one that ends with conference championships and big-time bowl games.

The last Sod Game in the cemetery is No. 102 when FSU traveled to Miami and beat the Hurricanes at Hard Rock Stadium in 2016. One of the biggest in recent memory was when they traveled to Clemson, South Carolina and beat the Tigers, 51-14.

Legendary head coach Bobby Bowden got his first Sod Game win after coming over from West Virginia when he took the Seminoles on the road to beat Boston College in 1976.

Another feature of the Sod Cemetery is bringing back past legends. including historic coaches and All-American players.

During the SodTalks, these legends meet fans at the Sod Cemetery.

The keeper of the Sod Cemetery is currently Doug Mannheimer. He must have one comfortable chair.

This article was originally published October 25, 2019. It was updated to correct the date of Dean Moore’s challenge to FSU, which occurred in 1962.