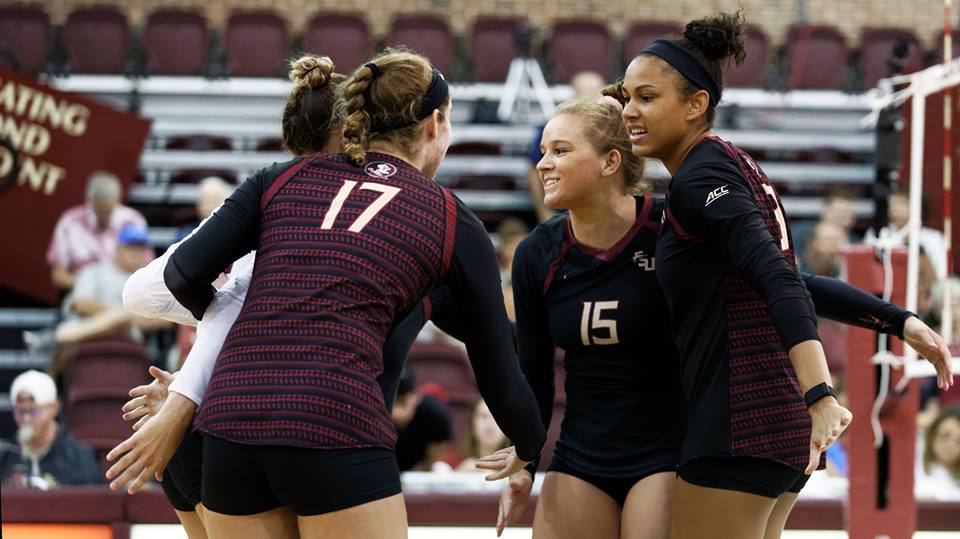 After beginning the season with a rocky start, the Florida State women’s volleyball team has turned it around with a great start in ACC play. The Noles started the season 1-4, but have won 10 of their last 13 matches including seven of eight against conference opponents. One of the largest differences in play this season has been whether a game has been at home or on the road. While playing in Tully Gym, FSU is 7-1, but 3-4 on the road and 1-2 in neutral sites.

They showed they can succeed on the road over the weekend with two wins against Boston College and Syracuse. The weekend began with 3-1 over Boston College(12-8, 2-6), but was much more exciting on Sunday with a five-set comeback win over Syracuse (10-6, 6-2) for their fourth consecutive conference win. The ‘Noles were led by Junior Outside Hitter Payton Caffrey who was named ACC Player of the Week for her outstanding performance over the weekend.

That does it! FSU's ninth block of the night finishes off a four-set win over Boston College on the road.#GoNoles | #WarriorOn pic.twitter.com/9ZNa8k9KgF

Though the Seminoles were able to take three of four sets, it was not an easy win with all but one set decided by less than five points. Boston College entered Friday with a better overall record, but they have struggled in conference play with only two wins in eight tries.

Caffrey was a force throughout with 17 kills and hitting .421. Christina Ambrose also had a nice match with 16 kills, though she did have four errors and only hit .255, helping earn the set victory.

Florida State won the first set, 25-21, even though they had their highest error total of the day with six. They lost their only set of the day in the second, 25-22. A run of errors after tying the set at 22 led to the ‘Noles loss. But they came back with two set wins, 25-21 and 25-17. Brianne Burkert(24) and Adrian Ell(19) led in assists while Kelsey Wicinski had 28 digs to lead the team.

FSU completes the come-from-behind win to take down the only other one-loss team in the ACC!

The Seminoles improve to an 11-7 (7-1 ACC) record 🍢#GoNoles | #WarriorOn pic.twitter.com/xpAt6tYNsl

After falling behind two sets to none, Florida State rolled to three straight set wins. Each of the first two sets were close, only two point losses. They were both close without the sets, but Syracuse just barely pulled out a come-from-behind win. But the Seminoles were able to take the third and fourth sets pretty easily, 25-16 and 25-18. As for game leaders, Caffrey was dominant with 26 kills. Ell had 31 assists and 10 digs while Burkert had 30 assists and 12 digs. Wicinski added 21 digs and six assists.

This weekend is big for the team moving forward because they needed some road wins to prove they don’t only win at home. Up to this point, they have been close to unbeatable at home, but struggle at any point on the road. So not only did they get some great conference wins, but also some confidence. Even with only one loss in conference, they are still in third-place behind Pittsburgh and Louisville, each being undefeated in conference play.

They need to continue winning on the road since half their remaining matches are away from Tully Gym. They do have the luck of at least splitting the top-two teams, one at home and one away. This team just needs to continue doing what it has done this season. Win at home and try to win at least half their games on the road.

At 11-7, they haven’t been perfect, but they have hit a hot streak that head coach Chris Poole must hope will continue on future road trips. And with players receiving conference recognition, it shows just how well they are playing. This week marks the second time Caffrey has received the award this season.

She has 124 kills on the season, hitting .321 for Florida State University. She has been the leader of a turn around from the beginning of the season. Taryn Knuth and Christina Ambrose each have 78 kills, Knuth leading the team with at .449.