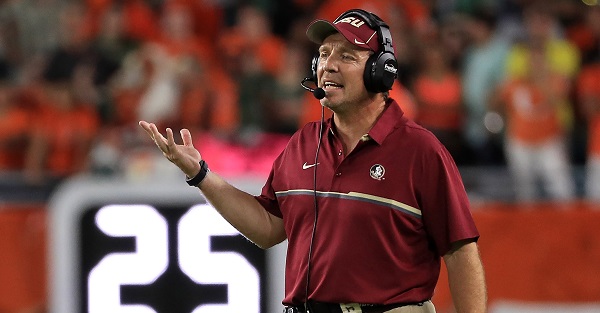 Jimbo Fisher is officially the head coach at Texas A&M, but that doesn’t mean he was done talking about his former school in Florida State. He took a major swipe at the Seminole athletic department and administration in his introductory press conference by basically saying they didn’t do enough for him while he was there.

Jimbo: “You can have the greatest coaches in the world, but if the administration doesn’t see things in the way you see things, and allow you to do things that way, nothing can be achieved.”

He can claim all those things, but here is a bit of the reality as FSU did try to give him quite a few amenities as well as a hefty paycheck.

Andrea Adelson went a step further and took some pictures of what Fisher was working with this season and she seems pretty fed up with his comments:

Since I’m still in Tallahassee, I decided to show you the facilities Jimbo had here. Look at this place! How can anyone be expected to win?! 🤔 pic.twitter.com/3DZldphzKo

Fisher was expected to change out a lot of his staff after the 2016 season because the defense was not where it needed to be and he never did, which is one of the reasons the Seminoles never quite got on the winning track many expected. That’s of course aside from Deondre Francois’ injury that derailed some of the season as a lot of the passing offense left with him when he left the field against Alabama.

However, to take a shot at a school where he spent so much time as an assistant and eventually a head coach is just ludicrous. He was the sixth-highest paid coach in the country and had enough money to hire assistants that could help win games, but he just didn’t make the required changes and couldn’t turn down the monster deal from the Aggies that will pay him $75 million over 10 years.