FSU’s AdvoCare Invitational Showing Was Good, But Not Good Enough 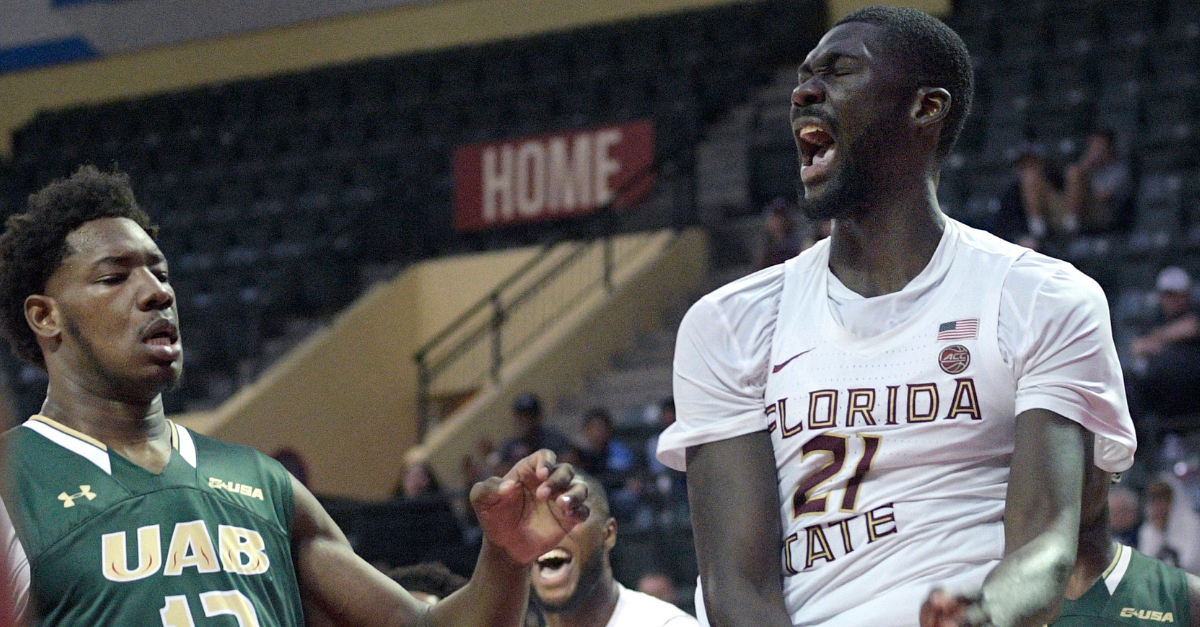 The Florida State Seminoles men’s basketball team entered the AdvoCare Invitational undefeated after three wins to start the season. The ‘Noles performed well, too, but fell short in the championship game to the defending national champions, the Villanova Wildcats.

The Seminoles began the season with wins over Florida, Tulane, and Canisius before their opening game-win in the tournament against the UAB Blazers. They then went on to beat nationally-ranked LSU in overtime before facing Nova in the championship game and falling 66-60 at HP Field House in Kissimmee, Florida.

RELATED: Where Are the Seminoles Ranked in the Latest AP Top 25 Poll?

Here is a look at all three games of FSU’s early-season tournament:

The ‘Noles and Blazers played close for the first seven minutes of the game, but a Christ Koumadje dunk started a 10-0 run to help build an 11-point halftime lead. Terrance Mann led the offense with 17 points on 5-for-5 shooting from the field. His only miss of the day came at the free-throw line, where he made six of his seven attempts. Koumadje had a nice all-around game with 12 points and nine rebounds, including a team-high three boards on the offensive end.

Trent Forrest played great at the defensive end of the floor with the highest defensive grade on the team and pulled in a game-high 11 defensive rebounds. PJ Savoy and Mfiondu Kabengele each added 10 points and three rebounds

.@TForrest_11 takes home the Spear for being the Highest Graded Defender against UAB #JunkyardDefense pic.twitter.com/5nojtrQJYx

FSU showed how they can win in a variety of fashions with a big win against the Tigers. LSU hit 51.9 percent of their field goal attempts compared to just 38.2 percent for the Seminoles. But thanks to second-chance points, bench scoring, and scoring off turnovers, they were able to pull out a win in overtime.

After earning a one-point lead heading into halftime, the ‘Noles eventually found themselves down by nine points with just over three minutes remaining in the second half. But a 12-3 run to end regulation was sparked by a Kabengele three-pointer. Forrest then hit a jump-shot and made a layup to draw the game to within two. An LSU dunk pushed it back to four, but MJ Walker, who finished with a game-high 21 points, made a 3-pointer with 18 seconds to bring the deficit down to one.

The Tigers’ Tremont Waters made the first of two free throw attempts before missing the second. Forrest then took the ball the length of the floor and made a layup to tie the game with just two seconds left. After a missed shot from LSU, the game went to overtime, which was back and forth.

Florida State built their largest lead of the day less than a minute into overtime with another Walker 3-pointer, but their lead faded and were eventually tied again at 73. Three free throws made for each team in the last minute had the game tied at 76 and the ball in the Seminoles’ hands. Even though Walker had made five triples in the game and Savoy has been extremely reliable from behind the arc, it was Kabengele who received the ball in the corner with two seconds remaining in overtime. And for only the second time this season, the ball bounced around the rim before falling to give the ‘Noles a three-point lead and the win.

The sophomore from Ontario, Canada finished the game with 15 points in just 18 minutes of game action. Forrest had a great all-around game with 10 points, seven rebounds, five assists, and four steals. Mann was a monster on the boards with a game-high 12 rebounds to go along with his nine points.

Florida State didn’t have much success on the offensive end against the defending champs, but they did force Villanova away from their strength of 3-point shooting. In their first six games, the Wildcats averaged over 33 three-point attempts per game. The Seminoles forced them away from that and forced them to only attempt 12 threes in the game. But Nova proved why they have won two of the last three NCAA Tournaments.

Kabengele built off his great game in the semifinals with 11 points and seven rebounds. Forrest finished with 11 points as well. The team showed their depth in this game, too, with 10 players scoring.

Congrats to @terance_mann on being named to the All Tournament team pic.twitter.com/TK9eH9qxa0

Mann, who is averaging team-highs with 12.8 points and seven rebounds, was named to the All-Tournament team after averaging 11.6 points and six rebounds over the three games.