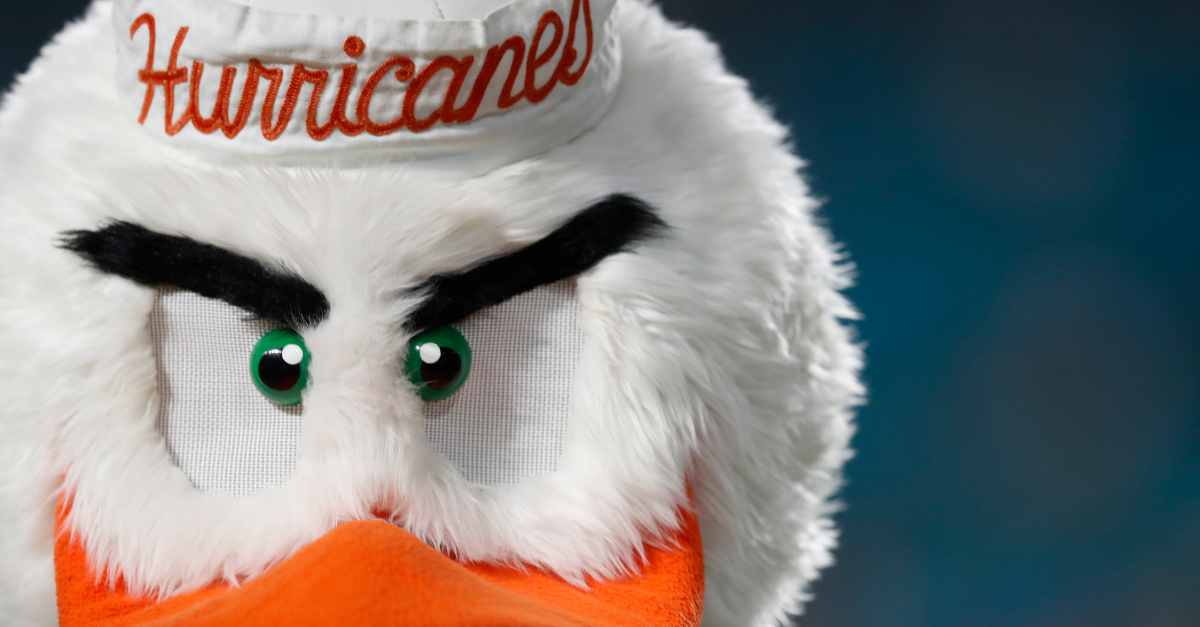 When you only have to leave your home state three times throughout the course of the college football season, that automatically qualifies as a favorable schedule. That is the case for the Miami Hurricanes in 2019 as they’ll only play three games outside the state of Florida.

After finishing 7-6 including a disastrous bowl game loss to Wisconsin, Manny Diaz takes over as the head coach of the Hurricanes and has already starting turning the program back in the right direction. Plus, it looks like the schedule for his first season leading the team sets them up for massive improvement, too.

The Miami Hurricanes 2019 football schedule is set. Here it is: pic.twitter.com/rQxhgaFM73

With six games played at Hard Rock Stadium for traditional home games, the Hurricanes also play at Florida State, a neutral-site game in Orlando against Florida, and at Florida International University in Marlins Park. The only games Miami will play outside of Florida are against North Carolina, Pittsburgh and Duke.

With high hopes for the 2019 regular season, where does each game rank for their difficulty? In the ACC, there aren’t many games you feel are easy wins, but I like the Canes’ chances of making another run to a Coastal Division Championship.

This is probably the toughest game of the season in the ‘Canes opener at Camping World Stadium in Orlando. The Florida Gators capped a 10-3 season with a Peach Bowl win over Michigan. They have a lot of their skill position players returning, but they do have much of their offensive line to replace. With another offseason under head coach Dan Mullen, I see their offense taking a step forward and their defense under Todd Grantham being just as good, if not better.

The last time these teams played in 2013, the Hurricanes won. But those were completely different teams with different coaches. This game could be a lot like the 2018 opener against LSU, but hopefully the quarterback and punter play is much improved, and Diaz can start his tenure off with a win.

There are so many things I don’t like about this game. First off, it is a Friday night game, which never goes well. Secondly, Virginia always shows up against Miami. Third, it is in Charlottesville. The Cavaliers have won five of the last nine games in this series and seven of the last 13 overall. I think Virginia is turning into a really good program under Bronco Mendenhall, so this is no easy win. Plus, it is only made worse with this game coming on a short week after playing Virginia Tech.

Obviously, playing the Seminoles in Tallahassee is never easy. Florida State only won five games last season, but they return quite a bit of their team and have a new offensive coordinator. They were good enough to build a 27-7 lead on Miami last season, so the Canes must come out and play well from the opening kick at Doak Campbell Stadium. This game will be decided by how much the ‘Noles improve compared to last year though. It is tough to imagine Diaz not getting his team to play better than in 2018, so can Florida State match that?

The Blue Devils were one of the teams to beat Miami last year, so this is definitely not an easy game, especially since it is on the road. Duke did lose their starting quarterback, Daniel Jones, who declared for the NFL Draft. Still, David Cutcliffe always seems to reload and put together a solid team year after year. The last time they played in Durham, the Canes scored a 31-6 win, and the time before that in 2015 ended with a lateral-filled kickoff return for a touchdown with no time left. Winning in North Carolina is never easy with ACC reffing crews.

Miami did end their 2018 regular season with a 24-3 win over the Panthers, but that came at home. A late-season game at Heinz Field is always tough. The last time they met in Pittsburgh, the Panthers handed the Hurricanes their first loss of the season in 2017. Pitt does lose their top two rushers from this past season, though I’m sure they will once again find production at the position. Something I think could make this game a little more difficult is that it will be the first road game the Canes will play in close to two months after five straight games at home.

Though I do kind of see this as a trap-game with it taking place the week after opening against Florida, I don’t think the Tar Heels are going to be a great team right off the bat under Mack Brown. North Carolina only won two games last season, including a 47-10 beat-down by the Canes. Even without three defensive touchdowns for Miami, that game still wouldn’t have been close. Redemption could be served when the ‘Canes travel to Chapel Hill.

This game will be played after a bye week, which makes it a little more favorable. Miami also played pretty well against the Hokies last season with a 38-14 win. In the last two games of this series, the Hurricanes have won by a combined 66-24. I see this as a tough, but extremely winnable game after a bye week. With how the last two games have gone between these teams, the Hokies are a very beatable team to start October.

With Paul Johnson no longer leading the Yellow Jackets, I could see this program being in rough shape for a few seasons as they have to restructure the roster from their run-heavy offense. The offensive scheme they ran under Johnson could take a little while to get away from with a ton of running backs, run-first quarterbacks and an offense that is not built to throw the ball. There isn’t going too much preparation needed to face this offense, which will definitely be a good chance for Miami’s defense to show out.

The Cardinals were definitely a struggling team last season with a 2-10 record. But it will be played late in the season, the week after the Florida State game, so that could be tough. But Louisville definitely isn’t the same program it was with Teddy Bridgewater and Lamar Jackson. At this point, I have a hard time imagining the Cardinals having an amazing turn-around from two wins to competing with top teams in the conference, especially since this game will be played in Miami.

This game does make me think quite a bit. Even though it might as well be a home game since it is played in Miami, the Panthers did push the Hurricanes last season and only lost by 14 points. With Butch Davis as head coach, FIU could scare the Canes if they don’t show up and play well. This game comes after a bye week and could be extremely important when it comes to rankings, or maybe even an undefeated season, so I don’t think Diaz will allow the team to take this game as a joke.

The Chippewas only won once last season, so I have serious doubts about this being much of a contest. The Hurricanes should win this by quite a bit in their home opener.

The combined score of the last two games in this series was 96-13. More than likely, this game fits that storyline of a blowout in favor of Miami. I would be very surprised if Bethune-Cookman keeps the score within 40 points.

“Welcome to the new Miami.” – @Coach_MannyDiaz

There are some games on this college football schedule that do make me nervous, especially not knowing what the Miami offense will look like, if newly-arrived Tate Martell will be eligible, or if the defense will be as dominant as it has been. Still, I think there is a pretty high floor for this season. Unless the team just isn’t good, I think finishing with an 8-4 record is worst-case scenario. However, I seriously think 10-2 is a realistic expectation with hopes of more. I could see this team being a lot like the 2017 team by squeezing out some close wins, and potentially, entering the final week undefeated. I think the difference will be a much-improved offense, even if it is N’Kosi Perry or Jarren Williams leading the charge at quarterback.

I will say I thought worst case scenario for last season was 10-2. This schedule does have quite a few games that could go either way if the offense struggles though, but I imagine Miami will at least be solid in the first year under offensive coordinator Dan Enos.

So, my final prediction is 10-2. They will lose the opener in a close game to Florida, go on a nice run and have one slip-up against either Pitt, FSU, or Duke. As a life-long Miami Hurricanes fan, I have been disappointed into just assuming we lose at least one or two games we shouldn’t, so it is tough to predict what could happen. The first few weeks under Diaz has definitely made me forget the frustrations of this past season, so in a month I may just go ahead and expect a College Football Playoff national championship coming to Coral Gables.