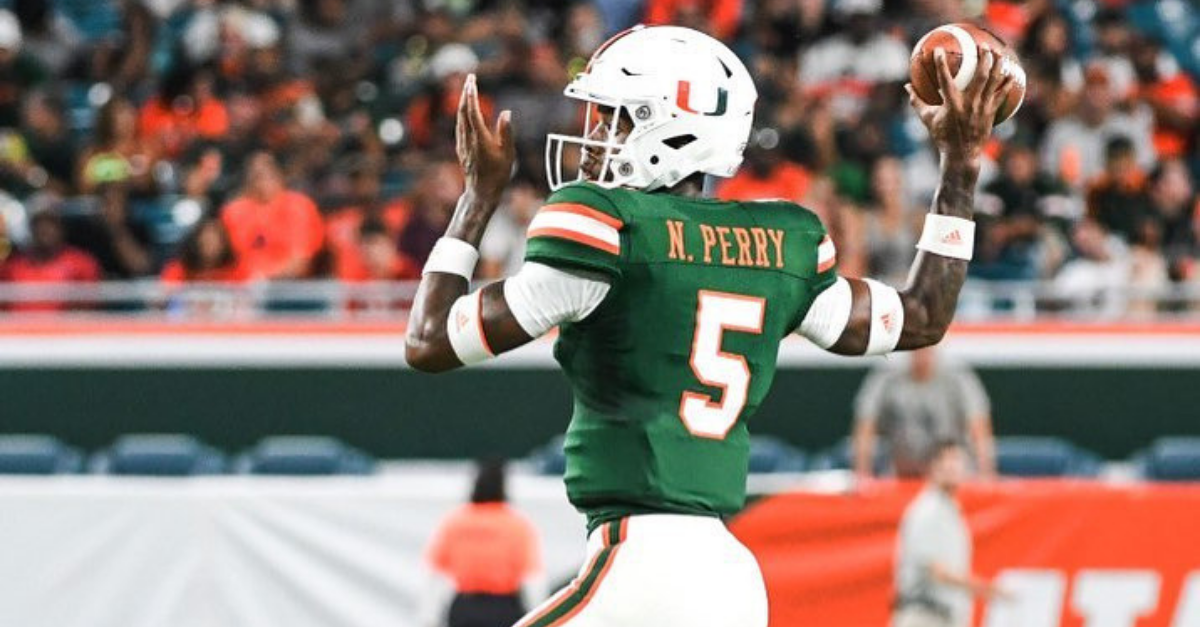 After another terrible offensive performance in the New Era Pinstripe Bowl, head coach Mark Richt shockingly retired, Manny Diaz returned as their next leader, and the Miami Hurricanes are still in need of some serious changes.

But now it isn’t just the fans who are calling for change. UM Athletic Director Blake James knows that a serious rebuild needs to take place, but the question remains: can this Miami team overcome an unbelievably disappointing 2018 and rise to the top of the ACC?

The worst part about the offense is they don’t need to be dominant and put up tons of points. Over the last two seasons, the defense has kept teams from scoring. Last year, they only allowed 19.9 points per game and they were even better this season at only 18.2 points per game.

But what needs to happen for the offense to improve next season?

While Miami Hurricanes Football fans are going to want Applewhite as the Offensive Coordinator, its highly unlikely to happen. Richt could restructure but expect him to remain play caller, Jon as the QB Coach and Thomas Brown as OC. https://t.co/eCaoOjYWvi

Mark Richt returned to coaching after his time at Georgia because he wanted to run an offense. He had missed calling plays in his later years coaching the Bulldogs, but he showed little to make anyone believe he could truly run a top offense. Even in his first season in Miami with quarterback Brad Kaaya and the 37th offense in yards, there were still struggles on third down and scoring points.

But three years of an average offense at best is enough. There is no reason to believe it will get better because if Richt could suddenly make the offense work, he would have done it after last season. Even with a month to prepare for Wisconsin, the ‘Canes was only able to put up three points.

Richt wanted to call plays. If the university forced him to give up that duty to another coordinator, could that be the reason he’s no longer coaching the Hurricanes?

With the amount of talent on the offensive side of the ball, it is crazy to think this team struggles to score a single touchdown against some average defenses. There are some offensive minds out there who put up 40 points a game with half the talent on the roster.

Malik Rosier and N’Kosi Perry warming up pregame along with the other 5 QBs pic.twitter.com/1r4yhuAaMk

Throughout this season, the Hurricanes went back and forth between Malik Rosier and N’Kosi Perry. There was never any way to predict how one would play, but Richt would flip between the two and neither seemed to ever make any improvements.

But with Rosier now gone, it will come down to Perry, Jarren Williams, possibly Case Weldon or a player who isn’t currently on the roster like an incoming recruit or transfer.

If those three are the only real options for next season though, they need to show improvement or else it won’t matter. Perry showed he has quite a bit of arm talent, but he just couldn’t consistently complete passes with a 50.8 completion percentage. Williams and Weldon didn’t get any real playing time, but this will be the make-or-break off season for each of them.

Richt constructed an offense that relied on a quarterback that can throw and run, but his last two starting quarterbacks have been bad at one of those. Kaaya was pretty good as a pocket passer, but he was about as immobile as they come. Rosier is the complete opposite with pretty good wheels, but extremely inconsistent at delivering the ball to his receivers.

Also, Richt hasn’t stuck to what his guy does well. He was calling run-pass options consistently with Kaaya against teams forcing him to try and run the ball. Rosier was forced into trying to throw the ball regularly when the running attack should have been Miami’s focus.

Now under new head coach Manny Diaz, he has to find what his players do best and put them in positions to do those things. How Richt talked about his offense has always sounded a lot like former defensive coordinator Mark D’Onofrio, and how his defense wasn’t the issue, it was how the players executed.

Change is coming for the entire Miami Hurricanes team and staff under their new head coach, but with a talented defensive team that excels in turning the football over, all the ‘Canes need is a competent offensive game plan, and they should return to competing on a national level in 2019 and beyond.