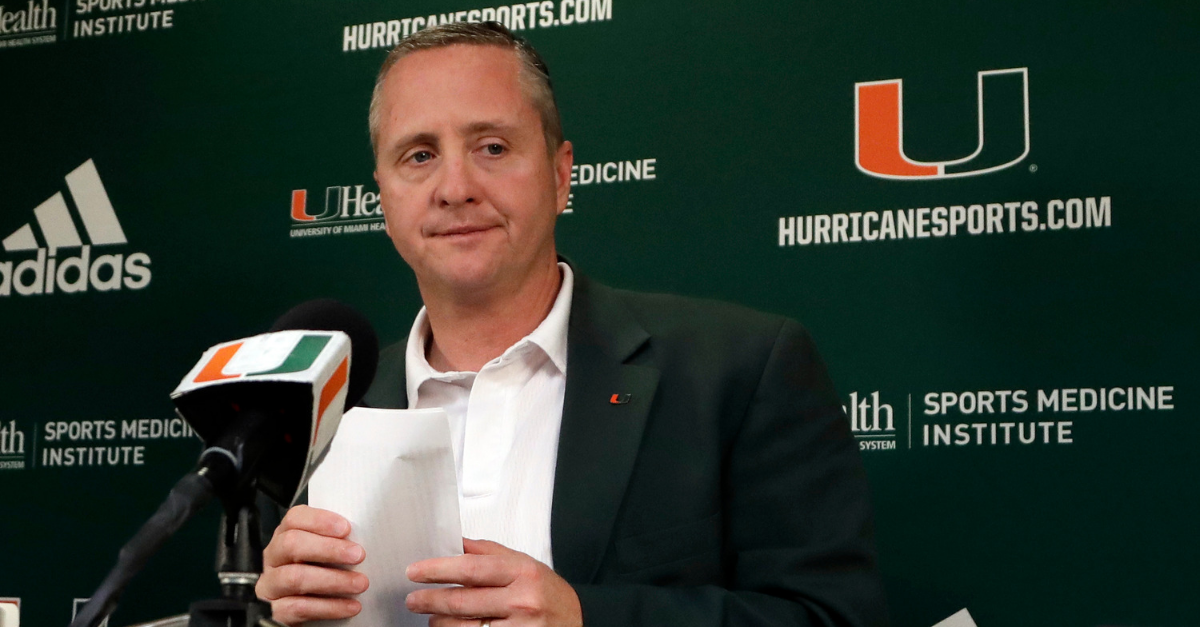 Once upon a time, the Miami Hurricanes were scary. They were the best football team in all the land in the 1980s, a fact backed by three national championships during that time. But I’m starting to think history doesn’t repeat itself, and The U has been anything but a fairytale in 2018.

The same can be said about every single one of Miami’s seasons since joining the ACC in 2004. Last year looked promising, and Miami was 10-0 at one point. They demolishing Notre Dame. The once distant College Football Playoff seemed within reach. The oh-so-awesome turnover chain was established. The U was back. That is, until it lost three straight games to end the season a disappointing 10-3.

So what happened to the preseason No. 8 team in 2018? We can start with Miami’s awful, lackluster performance in Thursday’s Pinstripe Bowl against Wisconsin. Not only did the Hurricanes manage to score a measly three points, but they only tallied six first downs — the lowest mark since a 58-0 loss to Clemson in 2015, after which head coach Al Golden was fired.

Current head coach Mark Richt wasn’t fired, but he did surprisingly announce his retirement on Sunday. That same day, Miami’s search for its next head coach concluded quickly as former defensive coordinator Manny Diaz accepted the job after taking the Temple head coaching job just a few weeks ago.

The 25th Head Coach of the Miami Hurricanes: @Coach_MannyDiaz https://t.co/wuJfpy9TGg

Anyway, back to the ugliness.

Many ‘Canes fans probably tuned out before Wisconsin added a late touchdown in the final seconds of the 35-3 lopsided loss. That’s understandable. Watching paint dry or waiting in the doctor’s office is more exciting than watching quarterback Malik Rosier with a ball in his hands. At least he did us a favor and put the ball in Badger defenders’ hands as often as he could. Rosier threw three interceptions and only completed five passes for 46 yards.

Much of the angst surrounding Richt was related to the offense and the fact that Miami didn’t employ an offensive coordinator. Richt himself called the plays, and it clearly didn’t work out. Neither did the tandem signal callers of Rosier and N’Kosi Perry under quarterbacks coach Jon Richt, Mark’s son. The Hurricanes’ offensive attack ranked 91st among FBS teams in 2018.

Many implored Richt to deploy more of a spread than pro style offense, arguing that’s a reason for the offense’s sputtering. During UM’s four-game losing streak earlier this season, it tallied:

That just doesn’t cut it. UM Athletic Director Blake James even tweeted a statement after Thursday’s loss to put the minds of fans at ease. Obviously, he wasn’t expecting Richt to step down.

Miami was already a stand-up special before the Pinstripe Bowl even began — the game itself was just the punch line, and even Miami natives could only laugh at the disappointing end to the 2018 season.

Take for example how punter Zach Feagles announced the day of the bowl game he’s transferring out of the program. Or even how center Tyler Gauthier was suspended for the Pinstripe Bowl for academic reasons hilariously after he already graduated. Like, what?

In case you missed the news at the start of the #PinstripeBowl, Miami's center was suspended for academic reasons *after* he graduated—which is frankly kind of impressive: pic.twitter.com/7cgoBQV9Tx

There was the sexually explicit video quarterback N’Kosi Perry posted to his snapchat, which the school even produced a statement regarding. Then, of course, a second video caught Perry saying, “I’m suspended, bro,” in regards to the Pinstripe Bowl.

And if you look beyond Miami’s current crop of players, its incoming recruiting class is uninspiring. The ‘Canes have just six four-star and zero five-star commits in their 2019 class, which 247Sports ranks 33rd. UM missed out on many commits that signed elsewhere and hasn’t landed a quarterback despite that position being the team’s main area of concern. Miami couldn’t even get a commit out of 2020 four-star quarterback Max Johnson, who committed to LSU despite being Mark Richt’s nephew and Jon Richt’s cousin. But, if fans want positives, Manny Diaz might be better for Miami at recruiting.

If Miami can’t land a transfer quarterback like Buffalo’s Tyree Jackson (who physically resembles Cam Newton) for next season, that “return to prominence” may be put on hold for another year. Maybe it’s time to put away the turnover chain until then as well.