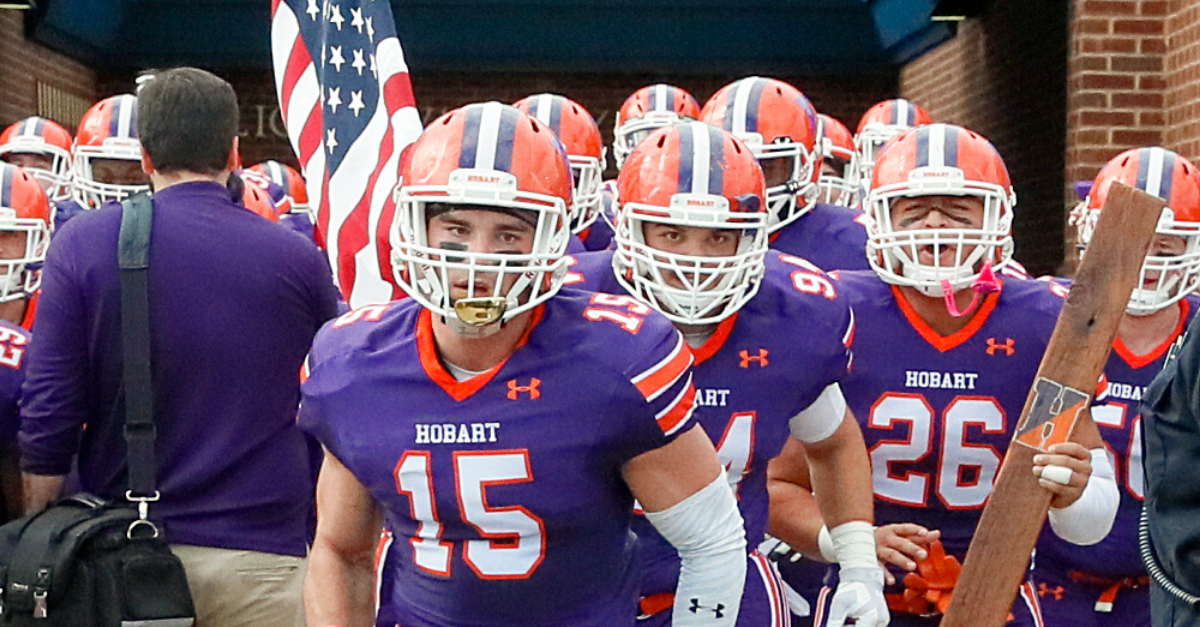 There will be no pregame Victory Walk or singing of the alma mater after wins at Hobart College’s 3,000-seat Boswell Field this fall.

No one will have the honor of bringing the wood, a tradition that has a different player each week leading the team onto the field carrying a 2-by-4 with the purple and orange ?H? logo that symbolizes the Statesmen’s standard for purpose, pride and passion.

And there will be no opportunity for a team returning most of its starters to build off last year’s strong finish and maybe go to the Division III playoffs for the first time since 2016.

The coronavirus pandemic has led to the cancellation or postponement of more than 1,800 games across all three NCAA divisions. Dozens more won’t be played among the 95 football schools in the National Association of Intercollegiate Athletics. The National Junior College Athletic Association has moved all of its games to the spring.

More than 1,000 games are off the fall schedule in NCAA Division III alone, with only three of the 28 conferences still planning to play all or part of a season.

?It wasn?t completely unexpected but obviously it was terrible hearing the actual news, and it?s very tough to process,? said linebacker Emmett Forde, the 2019 conference defensive player of the year and a first-team Division III All-American.

Forde is finishing a real estate internship in his hometown of Boston and was supposed to start his senior season in September. He hopes games are moved to the spring. Otherwise, he will have to decide whether it’s worth coming back as a fifth-year senior in the fall of 2021.

Similar discussions are going on among families across Division III, which is a far different environment from Division I, where football talent alone can pay the entire bill for a college education.

There are no athletic scholarships in Division III. It costs $72,000 a year for tuition, room, board and fees at Hobart, a liberal arts school with an enrollment of 2,200. Academic scholarships and need-based aid bring the cost down a little, or a lot, depending on a player’s situation. Still, it’s common to pay tens of thousands of dollars out of pocket each year.

Hobart typically doesn’t redshirt players, so all 23 of this year’s seniors will be eligible to come back for a fifth year. Coach Kevin DeWall said most, if not all, will be on the team if the season is played in the spring. Maybe half will be back if there are no games until the fall of 2021.

For many, the decision comes down to cost and whether it’s time to move on with life and start working or go to graduate school.

?I?ve had conversations with all our guys, not just the seniors, about how they best navigate this decision,? DeWall said. ?It might be an easier decision for someone getting significant aid. Some of these guys will be looking at the picture for the job market. There are no right or wrong answers. I’ll support whatever they want to do.?

Every small-college player knows playing beyond college is the longest of long shots. Only 20 Division III players have been selected in the NFL draft since 1990, according to D3football.com. Hobart holds the distinction of having produced the highest Division III pick ever ? offensive lineman Ali Marpet, taken 61st overall by Tampa Bay in 2015.

Hobart Football has been one of the winningest teams in the country for the last two decades.

Michael Nobile, one of the most dominant Division III players the last two years, thinks he has what it takes to play professionally and was looking forward to continue raising his profile at Delaware Valley in Doylestown, Pennsylvania.

Nobile is a returning All-American and two-time Middle Atlantic Conference defensive player of the year. He was the all-divisions leader in tackles for loss with 31 last year. In 2018, he led Division III and was second in all divisions with 33.5.

The 6-foot, 230-pound junior defensive lineman desperately wants to play in the spring rather than wait until fall.

?If I were to go into the season right now, I feel the best I’ve felt, I feel strong, I feel fast,? he said. ?Five months from now, if we were playing in the spring, I feel I could be the best player ever in this division. If I can get five more months of training, running and getting my body in the type of shape I want it to be, I feel I could be completely unstoppable.?

Hobart’s undersized Forde ? his coach said he looks like someone’s little brother ? knows his football career is nearing its end. He is hungry for one more opportunity to play in Hobart’s almost idyllic small-college setting, where the fall colors burst and there’s a chill in the air on Saturdays along the shore of Seneca Lake.

?We have a pretty nice stadium, and everyone’s parents come up, some of the student body comes out,? Forde said. ?Usually we have one night game a year, and that’s a great environment. It’s always a good time on game day.?

Forde said he and his teammates have stayed positive since learning there would be no fall season, and they have resisted any urge to feel sorry for themselves.

?There are people in much worse situations than us,? he said. “Obviously, football is just a sport. People are dying from this virus and it?s a national and global pandemic. We really can?t be selfish and think about ourselves. We have to think about society as a whole.”