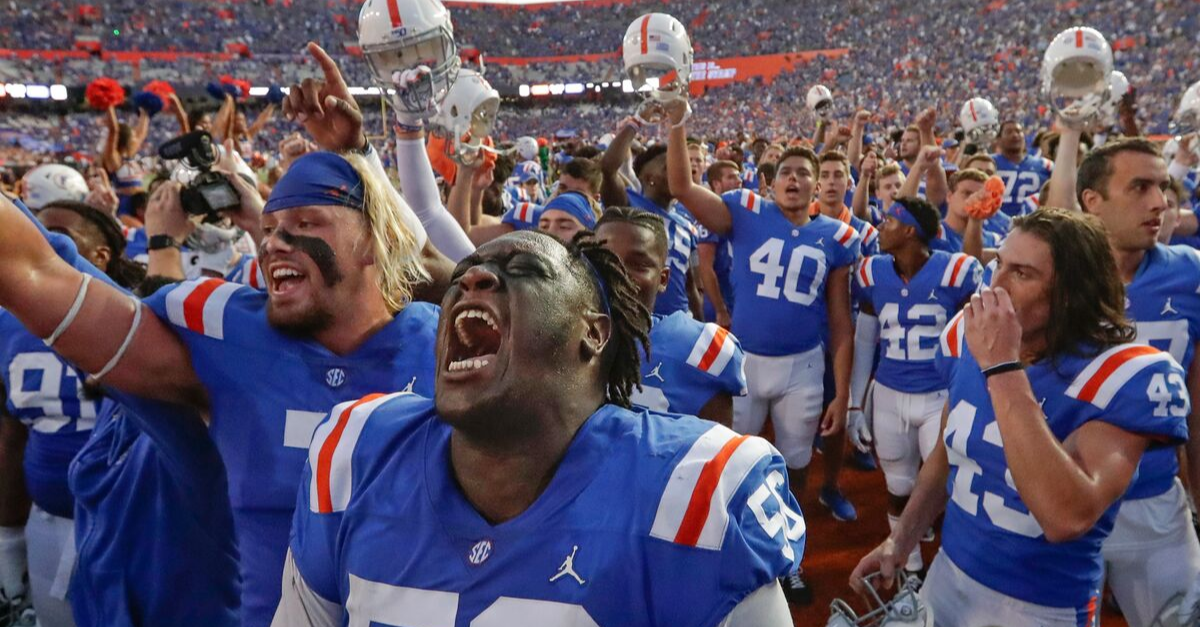 Ohio State and Georgia are tied at No. 3 in The Associated Press college football poll, and Florida surged to No. 7 after a big victory.

No. 1 Alabama and No. 2 Clemson held their spots Sunday after a week off for both, but the Buckeyes caught up to the Bulldogs in the AP Top 25 presented by Regions Bank.

POLL ALERT: Ohio State and Georgia now tied at No. 3 in Top 25 poll presented by @askRegions. Florida climbs to No. 7, Penn State into top 10; Baylor, Memphis, Cincinnati in.

The last time there was a tie in the top three was Sept. 20, 2015, when TCU and Mississippi shared third.

Florida moved up three spots after beating Auburn on Saturday. The Tigers slipped five to No. 12.

No. 22 Baylor is ranked for the first time since 2016, the season following the offseason firing of coach Art Briles. The school let Briles go amid a scandal related to the handling of sexual assault claims on campus. An investigation led to the president of the university and athletic director also departing.

Bears coach Matt Rhule told the AP on Sunday that he congratulated his team on being 5-0 after a convincing win at Kansas State the day before and senior linebacker Jordan Williams corrected him.

The third-year coach stepped into rebuild that was anything but normal.

The Bears started the ’16 season ranked under interim coach Jim Grobe and rose all the way to No. 8 in the country with a 6-0 start. They then lost their last six regular-season games and the program descended even further from there. After the 2016 regular season, Rhule was hired away from Temple, where he had taken a typically downtrodden team and won double-digit games in each of his final two seasons. With no Texas connections, the former Penn State player and NFL assistant seemed like an odd fit in Waco, Texas.

He hired several Texas high school coaches to bridge the gap in recruiting, but just getting through Year 1 was a major challenge.

“I remember thinking after the (season-ending) TCU game, ‘It will never be this bad again,'” Rhule said.

The Bears improved to 7-6 with a bowl victory last year, but the defense was still one of the worst in the nation. That’s turned. Baylor is 16th in the nation in yards per play allowed (4.49). Many of the players who were forced onto the field before they were ready during the first two seasons under Rhule are now juniors and seniors. The personnel fits the three-man front defensive coordinator Phil Snow prefers to use.

Offensively, Rhule has adapted to the talent available. The sideline-to-sideline, up-tempo spread used by Briles has been replaced by a more methodical and confined approach, though not quite so fullback-reliant as Rhule’s Temple teams.

Before Briles, Baylor was a perennial Big 12 cellar-dweller. Whether it could be more than that without him was an open question.

“The program could have gone the other way,” Rhule said. “But a lot of people’s efforts, starting with the players, kept that from happening.”

The @SEC leads the way with 6️⃣ teams in the Top 25, while the AAC makes a big jump with 3️⃣ teams this week 👏👏 pic.twitter.com/qQbGXfWLbe

The American Athletic Conference lost one team in the ranking but gained two.

Sliding out of the ranking after losing for the second time this season along with UCF were Washington, Oklahoma State and Michigan State (which was tied for 25th).

For the fifth straight week, the Southeastern Conference has three top-five teams.

This week’s slate has the most games matching ranked teams so far this season.

No. 1 Alabama at No. 24 Texas A&M. The Aggies will face the top-ranked team for the second time this season, which has happened 28 times previously (including postseason games). The last time that happened in the regular season was Tennessee in 2009, when it lost to both Florida and Alabama.

No. 7 Florida at No. 5 LSU. Gators will play in consecutive top-10 matchups.

No. 10 Penn State at No. 17 Iowa. The Hawkeyes often give ranked teams a hard time at Kinnick Stadium under the lights.