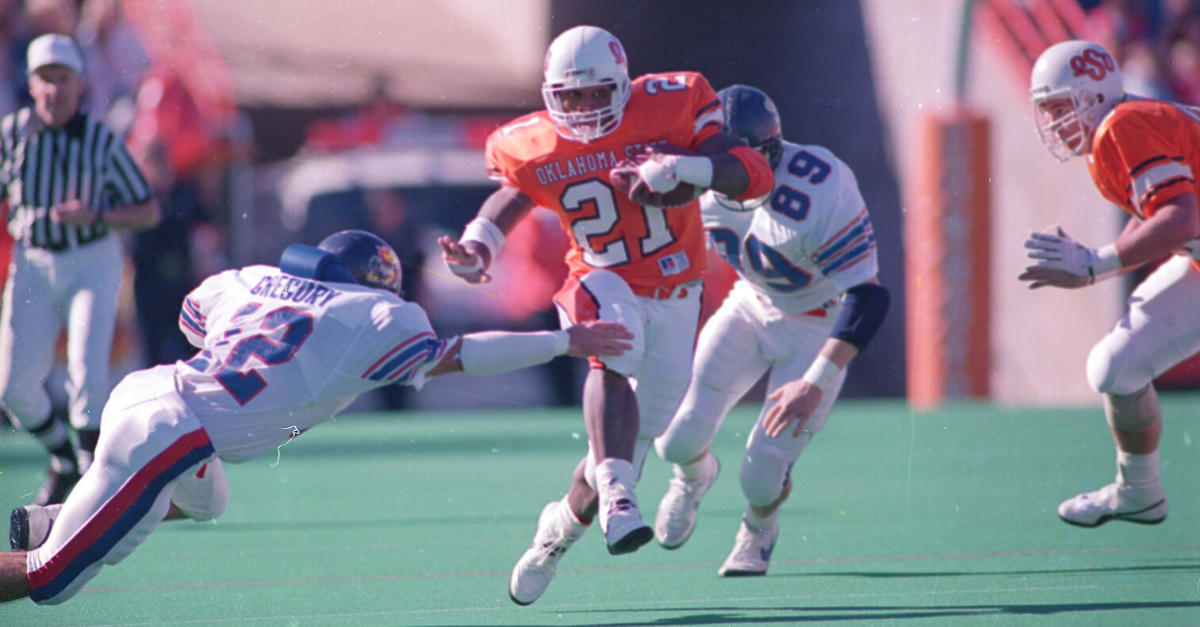 It’s been over 30 years since former Oklahoma State running back Barry Sanders made every college football field his own personal playground, but we still talk about it. He was simply that good and left a legacy perhaps no player will ever touch.

Honestly, his credentials in Stillwater, Oklahoma speak for themselves. Sanders’ 1988 season alone was better than most people’s career. Earning Unanimous All-American honors, 1988 Heisman Trophy, Maxwell Award, and Walter Camp Award was simply unbelievable at the time, and it still holds true today considering no one has touched his NCAA records.

When talking about the greatest college players ever, Sanders has to be on the short list. And according to USA Today balloting, he is the best college football player of all time.

Sanders beat out former Pittsburgh Panthers running back Tony Dorsett in the final round.

The people have spoken. @BarrySanders has been voted the greatest college football player of all-time. https://t.co/lZJzgl7gVv pic.twitter.com/lHNmEDf1oD

Sanders, now 51, went on to have one of the most sensational NFL careers ever. While playing for the Detroit Lions, the 5-foot-8 ball carrier from Wichita, Kansas went to 10 Pro Bowls, was named the 1987 Offensive Rookie of the Year, earned six First-Team All-Pro honors, and won the 1997 NFL MVP, just to name a few.

However, his legacy all started at Oklahoma State University and won him the greatest title a player could earn three decades later.

In 1988, Sanders’ junior year, he recorded 2,950 rushing yards with 42 rushing touchdowns, including the OSU Cowboys’ Holiday Bowl win over Wyoming. He was also a kickoff return and punt return specialist and was so damn good that he skipped his senior year to enter the 1988 NFL Draft.

He even had an action figure in college.

That’s why he has been named the GOAT by USA Today voters.

READ MORE: Barry Sanders Retired in His Prime. What Made Him Do It?