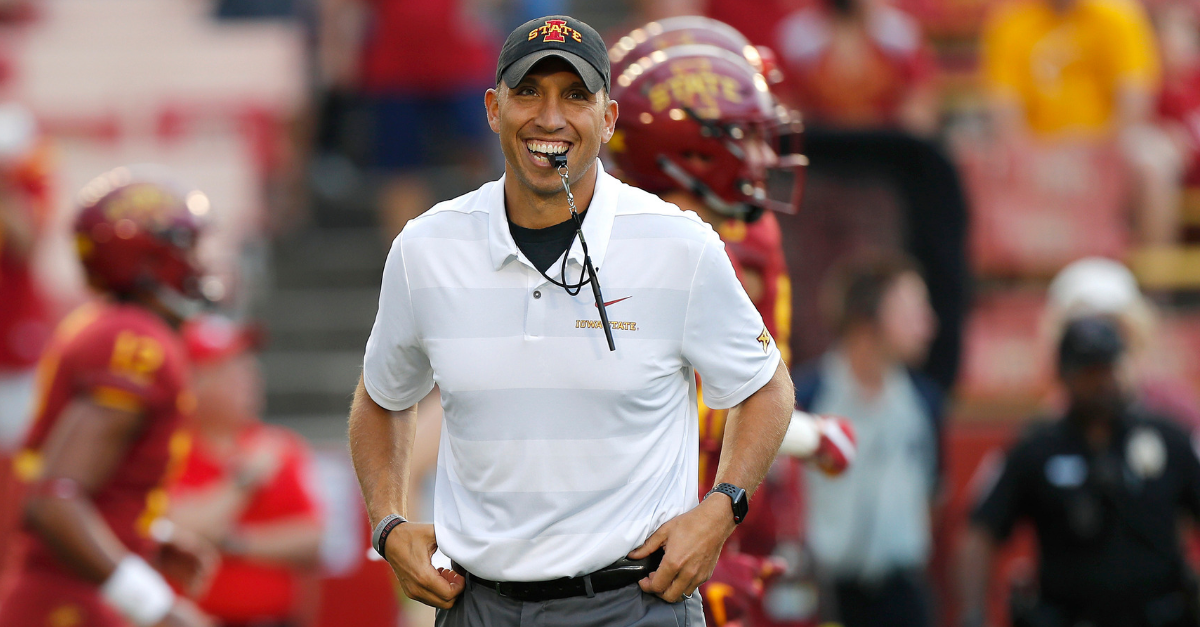 After 4 minutes, 55 action of action, and a lengthy lightning delay, Iowa State made the tough decision to cancel its highly-anticipated season opener against South Dakota State. The storm from the game is far from over to many, though.

Some nasty and dangerous weather in Ames, Iowa, ended the game at Jack Trice Stadium. In fact, according to the record books, the game never even existed despite the Cyclones holding a 7-0 lead. It is a ?no contest? per NCAA rules, but Iowa State Athletics Director Jamie Pollard felt like it was enough to let the team?s three suspended players to suit up against in-state rival Iowa this weekend.

Cyclones defensive tackle Kamilo Tongamoa, defensive back De?Monte Ruth and offensive lineman Julian Good-Jones sat out less than five minutes of their one-game suspension and now head coach Matt Campbell will have them available to play the Hawkeyes at Kinnick Stadium in Iowa City, Iowa on Saturday.

Even though the game was cancelled, the 1-game suspensions have been served. Here's Matt Campbell #Cyclones #CyHawk pic.twitter.com/vWWJ6URQlU

Oh, boy. This did not make people happy because some, especially Iowa fans, thought they didn?t serve the suspension since the game was cut short and technically doesn?t count.

?That would be naive to think it?s just a game. All situations are different,? he said.

All three players were suspended for different reasons.

According to The Des Moines Register, Tongamoa was arrested for OWI-first offense, hitting an unoccupied vehicle, and not having a valid driver?s license or insurance in January. Ruth was arrested just two days before the opener for driving with a suspended license after being stopped for a traffic violation. Good-Jones was suspended for violating team policy.

Ferentz suspended the best CB in the country for being 15 mins late to a meeting when Iowa was 11-0 and two games from the playoff.

Iowa State suspends 3 players for “one game.” Game gets cancelled, but ISU says “suspensions served” bc their Super Bowl is week 2.

The decision has been made, though, and there?s no going back.

“There is a lot more that goes into it than just the game aspect. I personally think those are so minimal. But it?s when you don?t get to practice with the first team for the last month or you?re on the scout team for the last three weeks ? or you had to get up in front of your teammates and apologize and maybe earn your way back onto the team ? which some of those guys in those situations had to do. Those are the teachable moments. When your team runs out for a game on Saturday and you?re in the stands, that?s pretty tough. It was an unfortunate situation Saturday that we didn?t get to play an entire game, but it kicked off ? there were meaningful reps played. Some of those guys, the lead-up of two or three weeks where they?re not even getting engaged in game-like activities, I think that?s hard. It?d be naive to say it’s just an entire game situation that is right or wrong, especially in certain situations.? ? Matt Campbell

That might be true, but less than five minutes of game time for a contest that doesn?t even count? That has to be the easiest one-game suspension ever served.