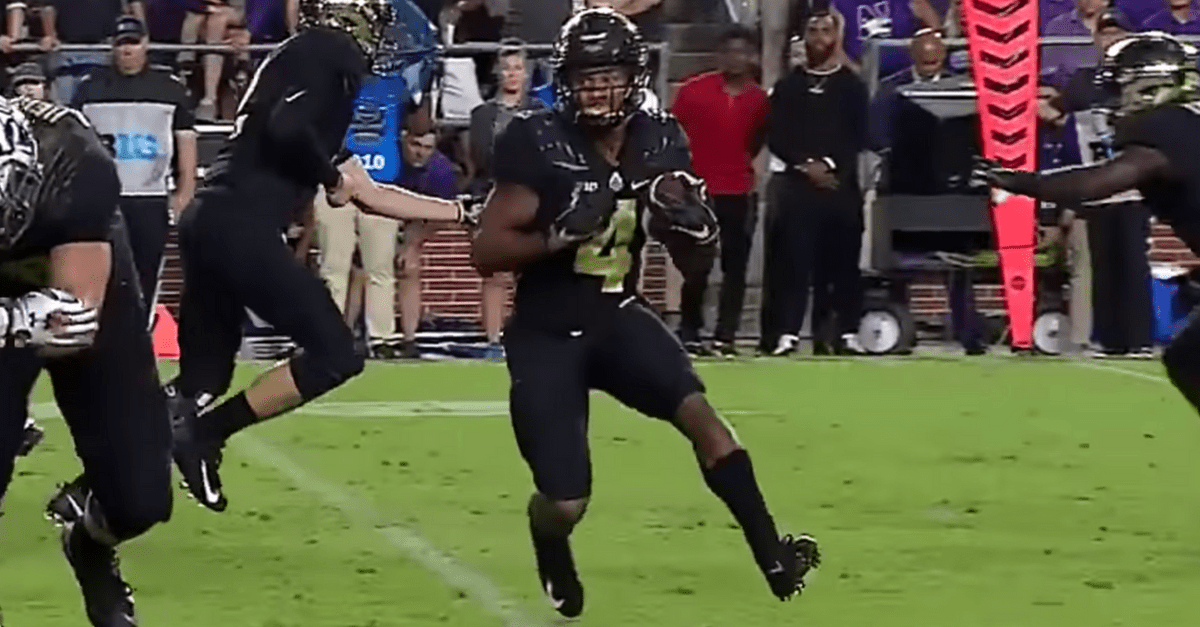 Everyone knew Purdue freshman wide receiver Rondale Moore was insanely fast, and fans got a small glimpse of his crazy strength this summer. The entire college football world got put on notice for his on-field talent Thursday night.

Not only did the 5-foot-10, 180-pound playmaker prove he already belongs at this level, but the true freshman broke the Purdue Boilermakers single-game yardage record during his debut with 313 all-purpose yards in a 31-27 loss to the Northwestern Wildcats.

Forget the train tracks for sidelines at Ross-Ade Stadium. This kid is legit.

The 313 yards from scrimmage broke the previous record of 312 yards that Otis Armstrong put up against the Indiana Hoosiers back in 1972.

Not too shabby for his first-ever college game after rejecting offers from Alabama, Florida State, and Ohio State to play for Jeff Brohm and the Purdue Boilermakers in the Big Ten Conference.

Moore, a one-time Texas commit who once clocked a 4.33 second 40-yard dash and posted a 42-inch vertical, was dominant all game and proved he is a capable threat in the passing game, on the ground and on special teams.

He caught 11 passes for 109 yards, rushed two times for another 79 yards, and compiled 125 return yards to break the record.

What?s crazy is the Louisville, Kentucky native, and former Trinity High School (KY) star, had 302 of his yards by halftime.

With 4 minutes, 20 seconds remaining in the first quarter, Moore caught 32-yard touchdown from Elijah Sindelar before housing a crazy 76-yard run a few minutes later to help the Boilermakers tie the game 14-14.

Moore is the early leader in the clubhouse for the Heisman Trophy. Too far? Fine, but at least it was fun to say after college football’s opening night.

Ladies and gentleman, Rondale Moore has arrived and it?s time for everyone to start paying attention.

Purdue?s next game against Eastern Michigan on September 8.